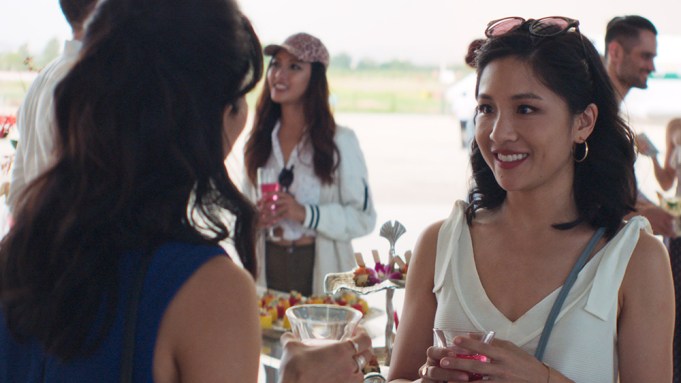 “Crazy Rich Asians” is heading for a glamorous first weekend with an estimated $22 million from 3,384 North American locations.

The Warner Bros. film debuted August 15 and has already racked up $16 million. Constance Wu, Henry Golding, Awkwafina, and Michelle Yeoh star in the Asian-led pic, the first of its kind since 1993’s “The Joy Luck Club.”

“Crazy Rich Asians” currently holds a Rotten Tomatoes score of 92% certified fresh and an A CinemaScore. Jon M. Chu directed from a screenplay by Peter Chiarelli and Adele Lim.

“The Meg’s” sophomore frame should come in second place with around $19 million from 4,118 domestic sites. The Jason Statham-starrer debuted to $45 million last weekend and has reeled in an additional $23 million since.

Statham stars as a scientist attempting to defend a beach from a prehistoric, 75-foot Megalodon shark. The Warner Bros. flick has also earned $154 million overseas.

STXfilms’ “Mile 22,” starring Mark Wahlberg, should bring in an estimated $14 million in its debut from 3,520 theaters. The CIA film has amassed $5.26 million since opening on Friday.

Wahlberg plays James “Jimmy” Silva, an operative of the CIA’s most highly prized and least-understood unit. Aided by a top-secret tactical command team, Silva must retrieve and transport an asset who holds life-threatening information to Mile 22 for extraction before the enemy closes in.

Peter Berg directed from a script by Lea Carpenter. The film has a B- CinemaScore and a 20% rating on Rotten Tomatoes.

Lauren Cohan, Iko Uwais, Ronda Rousey, and John Malkovich round out the cast of “Mile 22.” The movie carries a budget of $35 million, a relatively modest price tag for a star-driven actioner.

The fourth weekend of Tom Cruise’s “Mission: Impossible – Fallout” from Paramount should bring in around $10 million to total $183 million domestically. The film has made $463 million worldwide in its first 22 days.

“Christopher Robin,” starring Ewan McGregor, is likely to add another $9 million to its tally this weekend for a domestic total of around $69 million. The Disney pic has also earned $12 million internationally.

Elsewhere, “Alpha,” which currently holds an 84% Rotten Tomatoes score, took in $3.362 million on Friday at 2,719 locations. The Studio 8 film is projected to earn around $10 million in its debut weekend.

The movie stars Kodi Smit-McPhee, Leonor Varela, and Jens Hultén, and follows a young hunter who befriends an injured wolf during the Ice Age. Albert Hughes helmed “Alpha,” with a screenplay by Daniele Sebastian Wiedenhaupt.