‘The Grinch’ to Make Merry With $61 Million Opening Weekend 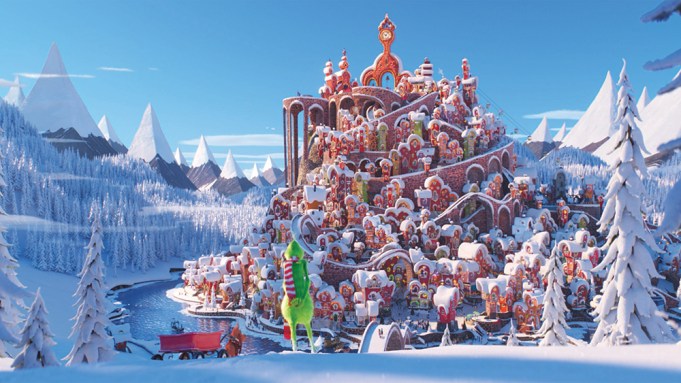 Holiday season has already started for “The Grinch” as it heads for a merry $61 million opening weekend at 4,140 North American locations, early estimates showed Friday.

Universal-Illumination’s animated comedy is performing right in line with forecasts of between $55 million and $65 million this weekend. Fox’s second weekend of “Bohemian Rhapsody” should lead the rest of the pack with about $28 million. Newcomers “The Girl in the Spider’s Web” and World War II horror tale “Overlord” should take in about $9 million each and will probably finish behind the second weekend of Disney’s “Nutcracker and the Four Realms” for third place.

“The Grinch,” adapted from the 1957 Dr. Seuss book “How the Grinch Stole Christmas,” features Benedict Cumberbatch as the voice of the titular Yuletide-hating character. The voice cast also includes Rashida Jones, Kenan Thompson, Angela Lansbury, and Pharrell Williams. Frequent Illumination collaborator Yarrow Cheney took on directing duties with Scott Mosier from a script by Michael LeSieur and Tommy Swerdlow, in which the Grinch attempts to ruin Christmas for Whooville.

“The Grinch,” the second Dr. Seuss story that Illumination has brought to the big screen following 2012’s “The Lorax,” carries a production budget of around $75 million. Universal is also opening “The Grinch” this weekend in 23 international markets.

“Overlord” has been forecast for a debut between $8 million and $13 million at 2,859 venues. J.J. Abrams produced the film and Julius Avery directed the supernatural story of a handful of American soldiers dropped behind enemy lines just before D-Day as they attempt to stop the Nazis from conducting nightmarish experiments. Critics have embraced “Overlord,” which carries an 84% “fresh” rating on Rotten Tomatoes. The film has a $38 million budget.

“The Girl in the Spider’s Web,” starring Claire Foy as the vengeance-seeking Lisbeth Salander, is performing at the low end of expectations, which had come in between $10 million and $15 million from 2,929 venues. It’s the second U.S. film based on the characters created by Swedish author Stiegg Larsson and comes seven years after David Fincher’s “The Girl With the Dragon Tattoo,” starring Rooney Mara, generated $230 million worldwide. “Spider’s Web,” directed by Fede Alvarez, carries a $43 million budget. Reviews have been mixed with a 51% Rotten Tomatoes score.

Fox’s “Bohemian Rhapsody,” which has over-performed with $65 million in its first six days, should decline about about 47% and wind up with more than $100 million domestically by the close of the weekend. Strong performances by “The Grinch” and “Bohemian Rhapsody” should keep 2018 North American box office well ahead of last year. The year’s total had reached $9.92 billion as of Nov. 7, an impressive 10.1% increase over 2017, according to comScore.