Box Office: ‘The Predator’ to Feast on ‘A Simple Favor,’ ‘White Boy Rick’ 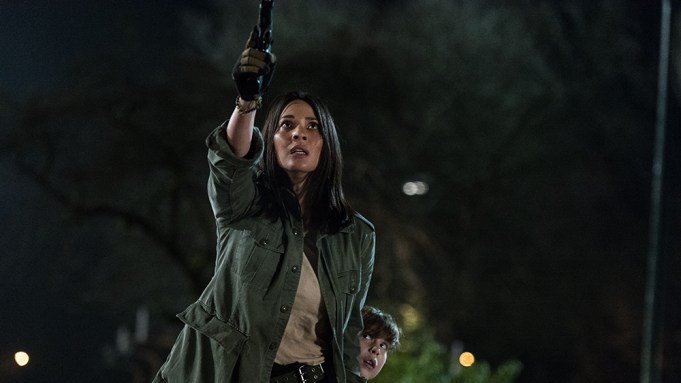 A familiar group of monsters are returning to invade multiplexes this weekend.

Fox’s “The Predator,” the fourth installment in the sci-fi series, looks to top a trio of fellow new offerings — “A Simple Favor,” “White Boy Rick,” and “Unbroken: Path to Redemption” — at the domestic box office. The No. 1 spot, however, could be a close call depending on the staying power of Warner Bros.’ “The Nun,” which led North America last weekend with its sizable debut. Another factor that could impact the weekend box office is Hurricane Florence, the category four storm that is targeting the east coast, specifically the Carolinas, Virginia, and Maryland. It’s too soon to tell the potential damage, though storm surges and heavy winds could close theaters.

Estimates show Shane Black’s “The Predator” could earn between $25 million and $32 million when it launches in more than 3,900 venues. A debut over $25 million would rank as the best start for the franchise (not including the two “Alien vs. Predator” crossover films). That distinction currently belongs to 2010’s “Predator” ($24.7 million). The first movie, “Predator,” kicked off in 1987 with Arnold Schwarzenegger.

Olivia Munn, Boyd Holbrook, Trevante Rhodes, Jacob Tremblay, Keegan Michael Key, and Sterling K. Brown star in the newest iteration. It follows a band of mercenaries who attempt to defend a small town from an invasion of extraterrestrial aliens that return to Earth. It opened to mixed reviews at the Toronto International Film Festival, and generated a mediocre 45% average rating on review aggregation site Rotten Tomatoes. Prior to its premiere, “The Predator” found itself at the center of controversy after the studio announced it deleted a scene featuring registered sex offender Steven Wilder Striegel. Fox said it was “not aware” of Striegel’s background when he was hired. Black has since apologized for casting Striegel, who is a friend of his.

It’ll be a battle of the supernatural to see if “The Predator” can best the second weekend of “The Nun.” The fifth “Conjuring” film generated $53.5 million when it bowed last weekend. That easily marks the best launch in the series, crushing 2013’s “The Conjuring,” which previously held the record with $41.8 million. It was also the second-best September debut behind Warner Bros.’ “It.” With a solid holdover, “The Nun” could earn between $20 million to $26 million during its sophomore outing.

Meanwhile, Henry Golding is returning to theaters before he even left. The “Crazy Rich Asians” breakout star is appearing alongside Blake Lively and Anna Kendrick in “A Simple Favor.” The neo-noir mystery is aiming for a mid-teens launch around $12 million to $15 million from 3,000 locations. Paul Feig, known for his work on “Freaks and Geeks,” “Bridesmaids,”  and “The Office,” handled directing duties, while Jessica Sharzer wrote the screenplay. Based on Darcey Bell’s book of the same name, “A Simple Favor” centers on Kendrick’s character, a small-town blogger who tries to solve the disappearance of her missing best friend.

That leaves Pure Flix’s “Unbroken: Path to Redemption,” which should bring in around $3 million when it opens in 1,525 venues. Using the same source material as Angelina Jolie’s 2014 film “Unbroken,” the spiritual successor takes a religious approach to the story of Olympian and World War II vet Louis Zamperini (Samuel Hunt). Harold Cronk helmed “Unbroken: Path to Redemption,” based on Laura Hillenbrand’s novel. The faith-based film depicts Zamperini meeting his future wife after returning home from war, along with his conversion to Evangelical Christianity after attending one of Billy Graham’s church revivals.