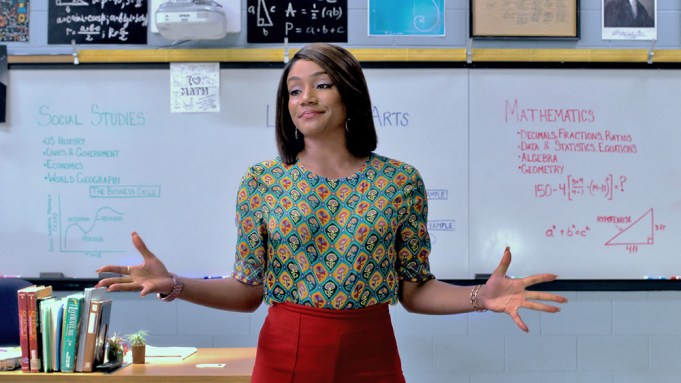 Kevin Hart and Tiffany Haddish are hoping that big laughs equal big bucks when “Night School” opens this weekend. Before the comedic duo can claim box office victory, however, they’ll have to fend off one adorable Yeti.

Universal’s “Night School” is eyeing a debut between $27 million and $35 million from 2,900 theaters. The film reunites Haddish with “Girls Trip” director Malcolm D. Lee and producer Will Packer. The PG-13 comedy finds Haddish playing an unorthodox teacher helping Hart get his GED. If estimates hold, the launch of “Night School” looks to be on par with “Girls Trip’s” $30 million start. That raunchy comedy became a sleeper hit, grossing over $140 million worldwide off its $19 million budget. “Night School” has a slightly higher price tag at $29 million.

Hart has long been a box office draw, but “Night School” will test the star power of Haddish in her first lead role since breaking out in last year’s “Girls Trip.” The comedienne solidified her charm making rounds on the late-night TV circuit, hawking Groupon and hosting “Saturday Night Live,” which won her a guest actress Emmy. She’s also earned admirers, including “There Will Be Blood” auteur Paul Thomas Anderson, who is open with his ambitions to work with her on a future film. We’d love to see her take on Daniel Plainview.

Haddish has a slew of titles hitting multiplexes in the next few months, including “The Oath” with Ike Barinholtz, Tyler Perry’s “Nobody’s Fool,” and a voice role in Warner Bros.’ “The Lego Movie 2.” Hart’s latest big screen outing was “Jumanji: Welcome to the Jungle,” the follow-up to the 1995 Robin Williams film. It was a global smash, earning a massive $962 million.

“Night School’s” fiercest competition will be the Warner Bros.’ family-friendly film “Smallfoot.” The animated comedy is aiming to pull in around $25 million when it bows on over 4,000 screens. In a twist on the legendary tale, Channing Tatum voices a Yeti named Migo, who comes across a human named Percy (James Corden), as both think the other species was just a myth. Karey Kirkpatrick, known for his work on “James and the Giant Peach,” “Charlotte’s Web,” and “Over the Hedge,” co-wrote and directed the film. The cast includes Common, LeBron James, Gina Rodriguez, Danny DeVito, and Yara Shahidi. And Zendaya is Meechee, but you probably already knew that.

“Smallfoot” isn’t the only movie targeting kids. Universal’s “The House With a Clock in Its Walls” will try to build on its stronger than expected opening last weekend. The fantasy film, starring Jack Black and Cate Blanchett, debuted to $26.8 million.

Then there’s “Hell Fest,” which looks to make $5 million to $9 million from 2,200 venues. Lionsgate and CBS Films are getting in on the spooky spirit a little early with the low-budget horror film that takes place in a theme park during Halloween. A costumed serial killer begins terrorizing a group of friends, who aren’t sure if it’s part of the park experience. “Paranormal Activity: The Ghost Dimension” director Gregory Plotkin, who also worked on “Happy Death Day,” handled filmmaking duties.

Pinnacle Peak’s “Little Women” is opening on far fewer screens. The seventh film adaptation of Louisa May Alcott’s classic novel should bring in $3 million when it debuts in 600 locations, timed to the novel’s 150th anniversary. First-time filmmaker Clare Niederpruem directed the movie, which stars Lea Thompson as  Marmee. The indie release is getting out ahead of the high-profile adaptation directed by Greta Gerwig and starring Saoirse Ronan, Timothée Chalamet, Meryl Streep, and Emma Watson. It hits theaters in 2019.

There are a slew of new indie films opening at the specialty box office. Fox Searchlight is releasing “The Old Man and the Gun” in five theaters. Robert Redford (in the final role of his career — or not?) stars alongside Casey Affleck in the larcenous comedy based on a New Yorker article about an octogenarian bank robber. Neon is launching “Monsters and Men,” a Sundance drama with John David Washington and “Hamilton” alum Anthony Ramos; while National Geographic Entertainment has “Free Solo,” a documentary about the first free solo rock climb of Yosemite’s El Capitan.