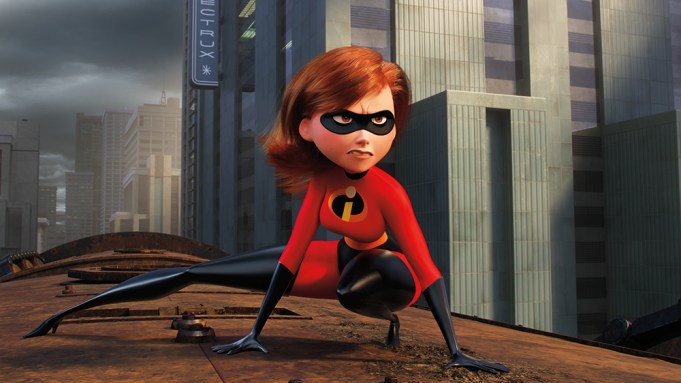 Superheroes are back to save the day — and the box office.

“Incredibles 2” will give the North American box office a nice boost this weekend as the Disney and Pixar animated superhero sequel is looking at a broad range between $125 million and $140 million when it bows at over 4,400 locations. A launch near the higher end of that estimate would earn the highly anticipated adventure the best opening weekend ever for an animated film.

That title currently belongs to another Pixar sequel, “Finding Dory.” The followup to 2003’s “Finding Nemo” launched in 2016 with $135 million and went on to pick up $486 million in North America and over $1 billion worldwide.

Like “Finding Dory,” enthusiasm has been strong for the sequel, which comes 14 years after its predecessor, “The Incredibles.” Early reception seems solid, as the film already boasts a 97% Fresh rating on Rotten Tomatoes. That’s on par with the acclaimed first film’s 97% average.

“Incredibles 2” picks up directly following the events of the original film with the Parr family members attempting to balance having a normal life with their superpowers. Holly Hunter’s Elastigirl takes center stage as she is recruited to lead a campaign to bring Supers back after superheroes are forced to permanently conceal their identities. Back at home, Craig T. Nelson’s Mr. Incredible takes on the heroic task of stay-at-home dad to care for their kids, Violet (Sarah Vowell), Dash (Huck Milner), and baby Jack-Jack. Samuel L. Jackson also reprises his voice role of the family’s trusty friend Frozone, while Bob Odenkirk, Catherine Keener, Sophia Bush, Phil LaMarr and Isabella Rossellini voice new characters.

The film was written and directed by Brad Bird, who also wrote and directed “The Incredibles” and “Ratatouille.” “Incredibles” opened in 2004 with $70.5 million, the second-largest opening at the time for an animated feature. It went on to win the Oscar for best animated film and earn $633 million worldwide.

“Incredibles 2” should set Disney back on track after “Solo: A Star Wars Story” disappointed earlier this summer. The expensive “Star Wars” film has had difficulty gaining traction at the box office with a North American tally of $178 million, along with $315 million worldwide. Though each Disney-released “Star Wars” adventure has managed to fly past the $1 billion mark, “Solo” is struggling to cross $400 million.

Warner Bros. and New Line’s “Tag” is targeting a release between $12 million and $16 million in more than 3,000 theaters. The R-rated comedy is based on a Wall Street Journal profile about a group of grown men who play a longstanding game of tag. Ed Helms, Jake Johnson, Jon Hamm, and Jeremy Renner play the four best friends, whose 30-year long game gets threatened when it seems like one might quit. Hannibal Buress, Isla Fisher, Rashida Jones, and Leslie Bibb also star in the film, directed by Jeff Tomsic and written by Rob McKittrick and Mark Steilen.

New Line’s latest title, “Game Night,” opened earlier this year with with $17 million — a solid start given the film’s $16 million price tag. As of this week, the Jason Bateman/Rachel McAdams dark comedy has pocketed $117 million globally, including $69 million domestically.

Meanwhile, “Superfly” is getting a head start by opening on Wednesday, with a wide range predicted of between $7 million and $15 million in over 2,200 locations during the five-day period. The $16 million project began production in January.

The original 1972 “Super Fly,” starring Ron O’Neal and directed by Gordon Parks, was hugely profitable at the box office with a $30 million gross from a $500,000 budget. While the film became a cult hit, its soundtrack composed by R&B legend Curtis Mayfield became even more popular and ultimately outgrossed “Super Fly’s” box office earnings.

“Gotti,” which premiered at the 2018 Cannes Film Festival, debuts at 500 locations this weekend. John Travolta co-stars with his wife, Kelly Preston, in the mobster movie centering on New York City Gambino crime family leader John Gotti. Kevin Connolly directed from a script by Lem Dobbs and Leo Rossi. The film was originally intended to be released by Lionsgate in 2017, but the studio sold it back to its producers two weeks before. Vertical Entertainment and Sunrider Productions are now co-distributing along with MoviePass Ventures, the movie ticketing service’s distribution arm.

“Gotti” is the second film from MoviePass Ventures. Its first endeavor was “American Animals,” a co-production with the Orchard. The R-rated crime film opened in limited release earlier this month with $134,793 from four locations. To date, it has earned $417,089 since expanding to 42 screens.

Elsewhere at the box office, “Ocean’s 8” should steal another $20-$25 million in its sophomore frame. The female-fronted heist spinoff had a series-best opening last weekend with $41.5 million.