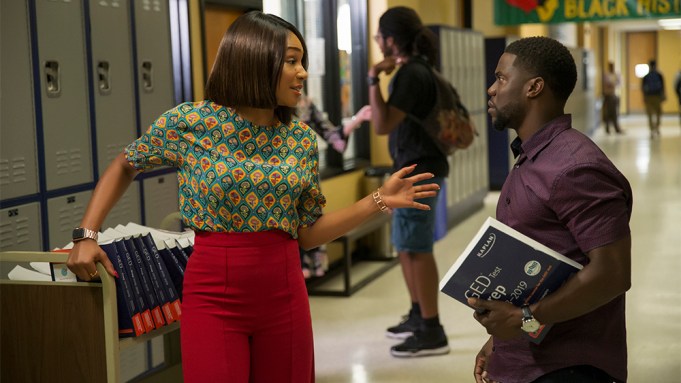 Even an adorable Yeti was no match for the comedic team of Tiffany Haddish and Kevin Hart.

Universal’s comedy “Night School” topped the domestic box office with $28 million from 3,010 locations. Fellow newcomer “Smallfoot,” Warner Bros.’ animated family film, came in close behind with $23 million when it launched in 4,100 venues. The two movies both launched on par with initial projections from industry analysts, helping drive the second-best September of all time in North America, according to comScore. The biggest September still belongs to 2017, bolstered by the massive showing of Warner Bros.’ “It.”

“Night School,” which cost $29 million to produce, marks the biggest debut of the year for a broad comedy. The PG-13 film reunites Haddish with “Girls Trip” director Malcolm D. Lee and producer Will Packer. “Night School,” however, didn’t garner the same critical praise as “Girls Trip.” It generated a low 31% average on Rotten Tomatoes, whereas “Girls Trip” boasts a 90% certified fresh rating.

With “Night School,” Universal now holds the three biggest original comedic openings of the past two years, along with “Blockers” and “Girls Trip.” The studio’s head of domestic distribution, Jim Orr, attributes the success to the team both in front of and behind the camera.

“We’re in business with the right people,” Orr said. “I couldn’t begin to give enough love to Kevin Hart, Tiffany Haddish, Malcolm Lee, and Will Packer.”

“Night School” looks to be another win for Haddish, who continues to prove her big screen bankability. That’s good news for studios since the comedian has a slew of titles hitting multiplexes in the coming months. The comedic dynamo has “The Oath” with Ike Barinholtz, Tyler Perry’s “Nobody’s Fool,” and a voice role in Warner Bros.’ “The Lego Movie 2” on the horizon.

“Smallfoot,” which features the ensemble voice cast of Channing Tatum, James Corden, Common, LeBron James, and Zendaya, is another movie aimed at younger audiences to resonate in recent weeks. Karey Kirkpatrick, known for his work on “James and the Giant Peach,” “Charlotte’s Web,” and “Over the Hedge,” co-wrote and directed the animated pic, which carries an $80 million budget.

Jack Black and Cate Blanchett’s kid-friendly fantasy film “The House With a Clock in Its Walls” notched third place. It picked up another $12.5 million in its second outing, bringing its North American tally to $44.7 million. Lionsgate’s “A Simple Favor,” starring Anna Kendrick and Blake Lively, scared up $6.5 million in its third frame to nab the No. 4 slot. The neo-noir drama has earned $42.9 million to date.

Rounding out the top five is Warner Bros.’ “The Nun,” which summoned another $5.4 million for a domestic total of $109 million. “The Nun” is officially the highest-grossing installment in the “Conjuring” franchise.

“There’s just an angle of it that really delivers to horror fans,” Warner Bros.’ head of domestic distribution Jeff Goldstein said.  “In the ‘Conjuring’ universe, there’s so much street cred among the fanbase.”

A slew of indie titles opened at the speciality box office. National Geographic’s “Free Solo,” a documentary about the first free solo rock climb of Yosemite’s El Capitan, earned the best screen average of the year. It launched with $300,804 in four theaters, translating to $75,201 per location.

Fox Searchlight’s “The Old Man and the Gun” pocketed $150,000 when it opened in five theaters. Robert Redford stars alongside Casey Affleck in the larcenous comedy based on a New Yorker article about an octogenarian bank robber.

Meanwhile Neon’s “Monsters and Men,” with John David Washington and “Hamilton” alum Anthony Ramos, bowed with $130,979 when it played on 18 screens.