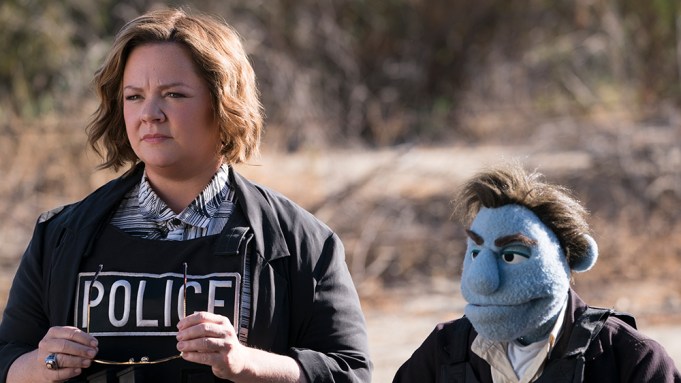 The box office has been surprisingly strong this August, and now it’s up to Melissa McCarthy and a gaggle of raunchy puppets to keep the momentum going.

That’s the hope (for STX Entertainment, at least), as “The Happytime Murders” aims for a mid-teens opening when the black comedy launches across 3,224 locations this weekend. Analysts are comparing the result to Seth Rogen’s bawdy R-rated animated comedy “Sausage Party.” Rogen’s film became a massive box office hit, picking up $140 million off a $19 million production budget. “The Happytime Murders,” however, carries double the price tag, at $40 million.

“The Happytime Murders” is set in the seedy underbelly of Los Angeles — a world where humans and puppets coexist — as McCarthy’s character, an LAPD detective, re-teams with her former puppet partner to solve a series of brutal murders. [Cue “SNL’s” Stefon voice] This movie has everything: Sex, offensive puppet jokes, murder, Melissa McCarthy snorting something through Twizzlers… At last, we finally get to see how puppets behave behind closed doors. Brian Henson, who ran herd on numerous “Muppets” movies, directed the R-rated pic, which also stars Maya Rudolph, Joel McHale, and Elizabeth Banks.

The projected launch of around $13 million to $15 million would be a slow start for a McCarthy movie. Earlier this summer, “Life of the Party” delivered one of her lowest openings yet ($17.8 million). Though her last few movies have stumbled, McCarthy has long been a box office draw. Her highest grossing film to date is “Bridesmaids” ($288 million), while “Spy,” “The Heat,” and “Identity Thief” have all also earned over $100 million.

STX could use a hit. The studio has struggled in recent months, as Amy Schumer’s “I Feel Pretty,” Mark Wahlberg’s “Mile 22,” and Shailene Woodley’s “Adrift” all suffered underwhelming results. It does seem to have a winner with the “Bad Moms” movies, as both titles in the franchise have pocketed over $100 million, and the studio claims it is more conservative with its advertising spending than legacy media companies.

Before it can take the domestic box office crown, “The Happytime Murders” will have to compete against two Warner Bros. titles. If “Crazy Rich Asians” remains strong, the romantic comedy should pick up around $10 million to $15 million in its sophomore frame. It launched last weekend with a better-than-expected $26 million for a five-day tally of $35 million. A sequel is already in the works. Meanwhile, shark thriller “The Meg” is also eyeing low-teens in its third outing. So far, the “Jaws” retread has made $83 million in North America and $318 million worldwide.

That leaves Global Road Entertainment’s “A.X.L.” as the final wide launch this weekend. Its prospects look bleak as the family film is on track to debut with low single-digits in 1,695 venues. That’s disastrous news for the beleaguered company. Earlier this week, Global Road’s lenders took control of the film division after the company failed to raise enough money to pay for future productions.

The movie’s title stands for Attack, Exploration, Logistics, referring to a code name that scientists gave to a top-secret robotic dog that was created by the military to protect soldiers. Alex Neustaedter portrays a teenage boy who encounters the dog, which represents the latest step in artificial intelligence. The cast also includes pop star Becky G, Alex MacNicoll, Dominc Rains,, and Thomas Jane. It’s the feature film debut of Oliver Daly.

In limited release, Sundance title “Searching” is bowing in nine locations. Shot from the point of view of phones and computer screens, it follows John Cho as he tries to find his missing teenage daughter, played by Michelle La. Bleecker Street is also launching “Papillion” in 520 locations. The drama, a remake of the 1973 film with Steven McQueen and Dustin Hoffman, features Charlie Hunnam and Rami Malek as two convicts who escape from prison.