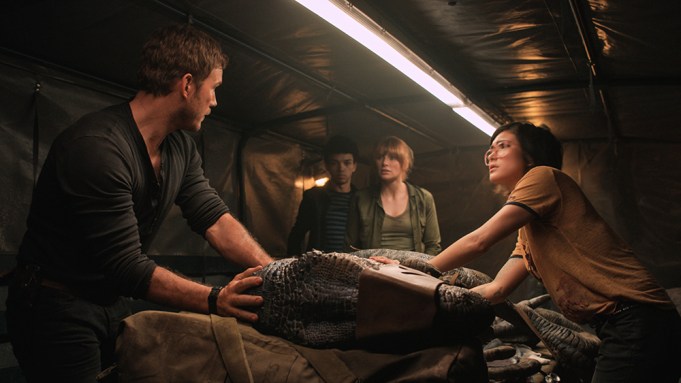 “Fallen Kingdom” picked up $60 million from 4,485 locations in its second outing, bringing its domestic tally to $264.8 million. Even with a 59% drop, the dinosaur tentpole has nothing to fear. To date, the Chris Pratt and Bryce Dallas Howard-led sequel has pocketed $932 million globally and is well on its way to crossing $1 billion. Overseas, the Universal and Amblin Entertainment blockbuster pulled in $56.1 million this weekend.

“Ocean’s 8” continues to stay in the top five, stealing another $8 million from 2,345 theaters this weekend. In four weeks, the Warner Bros. heist film has amassed $114 million at the domestic box office. Overseas, it generated $13 million for worldwide total of $209.7 million.

Earlier in the week, “Sicario: Day of the Soldado” and “Uncle Drew” were targeting openings between $10 million and $13 million. The follow-up to Denis Villeneuve’s “Sicario” scored a better debut than its predecessor, which opened with $12 million in 2015. The critically lauded original film — which scored three Oscar nods — picked up $84 million globally during its theatrical run. The sequel hasn’t gathered the same acclaim, earning a B CinemaScore and a so-so Rotten Tomatoes average of 64%. To compare, “Sicario” received a 93% on Rotten Tomatoes. Still, critics praised Josh Brolin and Benicio Del Toro for their performances. Stefano Sollima took over directing duties for “Soldado,” while Taylor Sheridan returned to pen the script.

Like “Sicario 2,” Lionsgate’s sports comedy “Uncle Drew” — based on the Pepsi commercial starring NBA icon Kyrie Irving — also served as counterprogramming against a series of superhero tentpoles. The film received an A CinemaScore, though its Rotten Tomato average was slightly less enthusiastic at 67%. As expected, the audience was 59% male, while 58% of moviegoers were over the age of 25. Charles Stone III directed the film, which stars Lil Rel Howery, Shaquille O’Neal, Chris Webber, Reggie Miller, Nate Robinson, Lisa Leslie, Erica Ash, Tiffany Haddish, and Nick Kroll.

At the specialty box office, Neon’s “Three Identical Strangers” made $163,000 when it opened in just five theaters. That’s a per screen average of $32,000 — a solid start during a summer where documentaries have fared exceptionally well.

Another documentary, “Won’t You Be My Neighbor,” ranked in the top 10 at the domestic box office again. Morgan Neville’s film, focusing on beloved children’s show host Mister Rogers, made another $2.3 million from 654 theaters in its fourth frame. In total, it has grossed $7.5 million.

The 2018 box office, which just hit $6 billion in record time, is up 9.3%, according to ComScore. Meanwhile, the summer box office remains a force, up 15.3% compared to last summer, which was the lowest popcorn season in over a decade.

Next weekend sees the release of Marvel’s “Ant-Man and the Wasp” starring Paul Rudd and Evangeline Lilly. The superhero sequel is currently tracking between $68 million and $80 million.

“The much-anticipated debut of Disney’s ‘Ant-Man and The Wasp’ will get the momentum train rolling again with what will be the latest in an impressively long line of box office and critical hits for the Marvel brand,” said Paul Dergarabedian, box office analyst at ComScore.