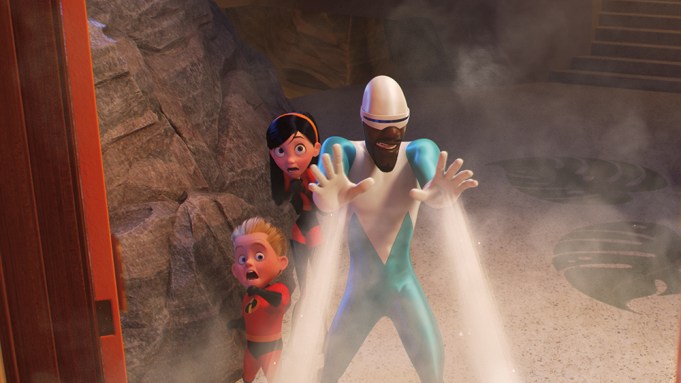 Disney, however, is being more modest in its predictions, estimating an opening between $150 million and $165 million. Regardless, “Incredibles 2” will obliterate the previous record for an animated movie opening, set two years ago by Disney-Pixar’s “Finding Dory” at $135 million. Should the $173 million estimate hold, it would be the 11th-biggest domestic launch ever, just behind “Iron Man 3” at $174.1 million.

”’Incredibles 2′ is the perfect film at the perfect time with kids and families having waited patiently for big screen entertainment (which has been lacking in recent weeks for this audience segment) and the results are already staggering with a potential record weekend in the cards,” he noted. “The latest animated treat from the beloved Pixar brand is going to snowball in popularity over the weekend and likely exceed even the grandest opening weekend projections, and this will give a huge and much-welcomed boost to the summer-season box office fortunes.”

“Incredibles 2” already boasts a 94% fresh rating on Rotten Tomatoes. The sequel picks up directly following the events of the original film, with the Parr family attempting to juggle a normal life with superhero responsibilities. Holly Hunter’s Elastigirl takes center stage as she is recruited to lead a campaign to bring Supers back after superheroes are forced to permanently conceal their identities.

The film was written and directed by Brad Bird, who also wrote and helmed “The Incredibles” and “Ratatouille.” “Incredibles” opened in 2004 with $70.5 million, the second-largest opening at the time for an animated feature. It went on to win the Oscar for best animated film and earn $633 million worldwide.

“Incredibles 2” represents a rebound for Disney after “Solo: A Star Wars Story” under-performed earlier this summer. “Solo” has taken in $182 million domestically in its first 20 days — far less than the three previous “Star Wars” titles. It’s going to battle the fifth weekend of Fox’s “Deadpool 2” for fourth place with about $10 million.

Warner Bros.’ opening weekend of R-rated comedy “Tag” was performing in line with estimates with about $14 million at 3,382 theaters. The movie, based on a Wall Street Journal article about a group of grown men who play a longstanding game of tag, stars Jeremy Renner, Ed Helms, Jake Johnson, and Jon Hamm.

Sony’s “Superfly” remake, which took in $2.1 million at 2,220 North American locations in its first two days starting on Wednesday, remains on track to reel in about $8 million more during the weekend.

“Gotti,” which premiered at the Cannes Film Festival, debuts at 503 locations this weekend and was tracking for about $1.7 million from Vertical Entertainment, Sunrider, and MoviePass. John Travolta co-stars with his wife, Kelly Preston, in the mobster pic centering on New York City Gambino crime family leader John Gotti.

Warner Bros.’ second weekend of “Ocean’s 8” will probably finish second ahead of “Tag,” with about $22 million after opening in first place last weekend with $41.6 million. The heist comedy should wind up with more than $80 million in its first 10 days.

The high-priced “Solo: A Star Wars Story” will end up with $193 million domestically in its first 24 days, while “Deadpool 2” should finish with around $295 million in 31 days.

“Incredibles 2” should keep up the momentum of the 2018 North American box office, which was leading last year by 3.8% at $5.24 billion as of June 13 — particularly with Universal launching “Jurassic World: Fallen Kingdom” on June 22 amid tracking showing a domestic launch of about $140 million.

The year has seen a pair of Disney mega-hits so far with “Black Panther” at $699.5 million domestically — trailing on “Star Wars: The Force Awakens” and “Avatar” — and “Avengers : Infinity War” at $658.1 million, just behind “Titanic” for fourth place.