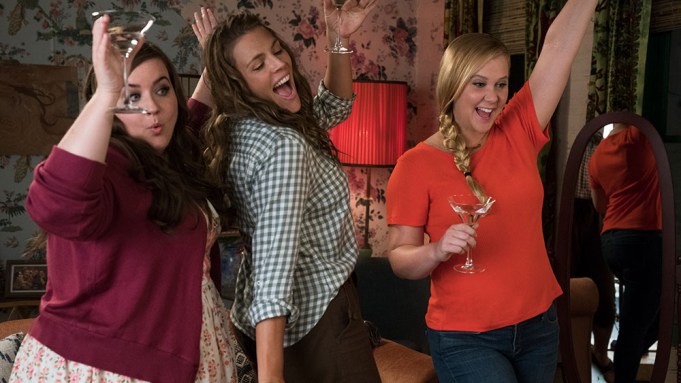 Fox’s launch of fan-funded “Super Troopers 2” could nearly double recent forecasts, and is set to finish in fourth place with about $11 million at 2,038 location, including $1.4 million from previews. Lionsgate’s opening of “Traffik” is heading for a moderate debut of $4 million at 1,046 venues.

Paramount’s third weekend of “A Quiet Place” should win what will be a quiet weekend as the horror-thriller continues to draw surprisingly well. The tale of a family under attack in a remote forest has grossed a healthy $111 million in North America in less than two weeks, including a stunning $50 million opening on April 6-8.

STXfilms’ “I Feel Pretty” is poised to take in about $17 million at 3,440 locations this weekend after a modest $1 million from 2,600 sites during Thursday previews. Warner Bros.’ second weekend of Dwayne Johnson’s “Rampage,” which edged “A Quiet Place” last weekend, will battle “I Feel Pretty” for second place. “Rampage” has taken in $43 million domestically in its first six days and is nearing $200 million in worldwide grosses.

“I Feel Pretty” is coming slightly above recent expectations, which had been for an opening weekend in the $15 million range. That’s still down significantly from 2015’s “Trainwreck,” which debuted with $30 million and elevated Schumer to star status, and 2017’s “Snatched,” which bowed to $19.5 million with $650,000 in previews.

“I Feel Pretty” stars Schumer as an insecure woman who, after suffering a head injury, suddenly thinks she’s beautiful. Michelle Williams, Rory Scovel, Emily Ratajkowski, Busy Phillips, and Aidy Bryant round out the cast. Critics have not been impressed as the film has a 37% rating on Rotten Tomatoes.

“Super Troopers 2” reunites the five stars of the original 2001 film — Jay Chandrasekhar, Kevin Heffernan, Steve Lemme, Paul Soter, and Erik Stolhanske, collectively known as Broken Lizard. The quintet plays profane Vermont state troopers with a penchant for pranks and feuding with other local law enforcement officers. The sequel, which was crowd-funded in 2015 with an impressive $4.4 million from fans of the original, had been forecast to finish the weekend with about $6 million.

Lionsgate’s Codeblack Films’ “Traffik” has been forecast for an opening weekend of $3 million to $4 million from 1,046 locations. Written and directed by Deon Taylor, the thriller stars Paula Patton and Omar Epps, and follows a group of friends who are terrorized by a biker gang in a remote countryside home.

Year-to-date domestic box office is off 3.4% at $3.36 billion as of April 18, according to comScore. Updated tracking on Thursday showed that Marvel-Disney’s “Avengers: Infinity War” should jump-start moviegoing when it opens next weekend with between $190 million and $235 million-plus.