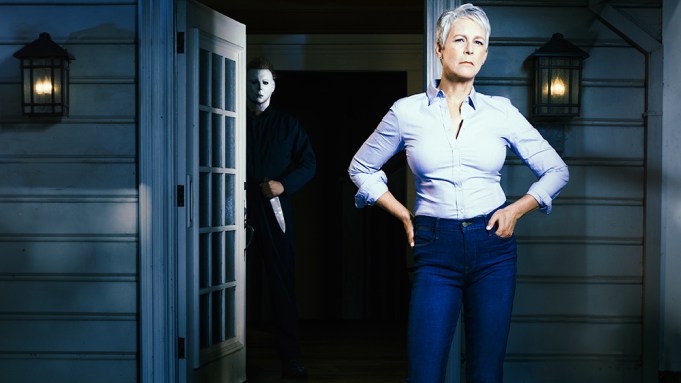 Forty years after narrowly escaping Michael Myers wrath, Laurie Strode is heading back to theaters to face off against the creepy masked murderer once again.

Universal’s R-rated slasher, which was produced by Blumhouse and Miramax, is eyeing a start around $45 million when it opens on Oct. 19, though that number could shoot even higher as buzz builds around the spooky sequel. Some estimates show it could make over $55 million during the three-day period. That would be massively successful given that it was made for just $10 million. It would also rank as a series-best launch for the “Halloween” franchise. The 2007 “Halloween” reboot has the biggest debut to date with $26 million.

Jamie Lee Curtis reprises her role for the fourth time as Laurie Strode, the former babysitter who is now a grandmother. Nick Castle also returns as Michael Myers, the deranged serial killer who readies for a final showdown with Strode on Halloween night. Though there have been 11 films in the “Halloween” franchise, this go-round is a direct sequel to the original 1978 movie.

While the last few iterations in the series have been critically reviled, “Halloween” premiered to a largely positive reception at this year’s Toronto Film Festival. It currently holds an 85% on Rotten Tomatoes — a huge improvement from the earlier movies that averaged ratings well below 50%.

“Halloween” shouldn’t have much direct competition that weekend as the only other title launching wide is Aviron’s “Serenity.” The neo-noir thriller is tracking for a single-digit debut around $8 million. Matthew McConaughey and Anne Hathaway star in the film, which was written and directed by Steven Knight (“Dirty Pretty Things”).