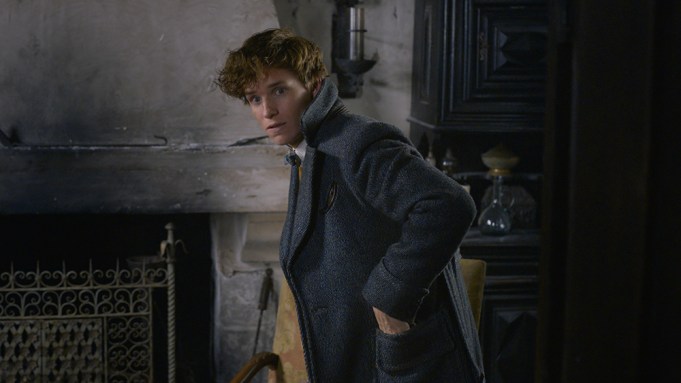 Put your wands up, muggles. The upcoming chapter in the “Harry Potter” universe looks to enchant moviegoers and dominate the global box office.

“Fantastic Beasts: The Crimes of Grindelwald” is expected to earn $65 million from over 3,300 domestic locations, though industry estimates show that number could end the weekend closer to $75 million. The higher part of that range would be in line with the opening of “Fantastic Beasts and Where to Find Them,” the first entry in the “Harry Potter” spinoff series. That film debuted with $74 million on the same weekend two years ago and went on to generate $234 million in North America and $580 million overseas. The second film carries a slightly bigger budget of $200 million, while the first outing cost $175 million.

Warner Bros., the studio behind the magical movies, expects to see a similar boost from the international box office. The sequel could make as much as $250 million this weekend when including foreign markets, where it will launch day and date in nearly 48 territories.

“The Crimes of Grindelwald” is the second entry in what Warner Bros. intends to be a five-film franchise and is part of the studio’s ongoing effort to wring more riches from the wizarding world popularized by author J.K. Rowling. There were skeptics about how the prequel series would compare to “Harry Potter,” both in box office revenues and audience reception. “Fantastic Beasts and Where to Find Them” garnered largely positive reviews and became the first movie in the greater Hogwarts universe to win an Oscar. Now, the adventures of Dumbledore and Grindelwald will test the magic of the fantasy series.

Critics have been harsher this time around, branding it with a mixed 58% on Rotten Tomatoes, compared to the first film’s 74%. Variety’s Andrew Barker called the movie “cluttered” and said “magic is in short supply.” But this is the “Harry Potter” universe, after all, and a few naysayers might have little impact on die-hard Potterheads. Controversy surrounding Johnny Depp’s casting (he plays the infamous dark wizard Gellert Grindelwald) didn’t seemed to taint enthusiasm. Rowling defended Depp’s involvement after domestic assault allegations were leveled against the actor. Depp addressed casting ire himself, saying, he “felt bad for J.K. [Rowling] having to field all these various feelings from people out there.”

In “Crimes of Grindelwald,” Eddie Redmayne returns as magizoologist Newt Scamander. While the prequel series takes place in the 1920s and comes before the adventures of everyone’s favorite boy wizard, this installment begins to meld the wizarding world we know from the “Harry Potter” films. Jude Law joins the cast as Albus Dumbledore in the days before he was the beloved headmaster of Hogwarts School of Witchcraft and Wizardry. In this film, he teams up with Scamander to take down Grindelwald. The cast also includes Katherine Waterston, Ezra Miller, Zoe Kravitz, and Dan Fogler. Rowling wrote the screenplay and David Yates, who helmed several “Harry Potter” movies, returned to direct.

While “Fantastic Beasts” is expected to dominate the domestic market, two new offerings opening in wide release are targeting audiences who aren’t enamored with fantastical happenings. Fox and New Regency are launching Steve McQueen’s heist drama “Widows,” which is on track to bring in between $12 million and $18 million from over 3,000 theaters. The film cost $40 million to make and follows a group of women who arrange a caper in order to pay back a crime boss after their criminal husbands are killed on a job gone wrong. The ensemble cast includes Viola Davis, Michelle Rodriguez, Elizabeth Debicki, and Cynthia Erivo. Since its debut at the Toronto Film Festival, “Widows” has garnered rave reviews, especially for Davis’ performance.

Meanwhile, Paramount’s comedy “Instant Family” is eyeing $15 million to $20 million when it launches in 3,258 venues. The feel-good film stars Mark Wahlberg and Rose Byrne as a married couple who adopt three young children. Sean Anders, known for his work on “We’re the Millers,” “Hot Tub Time Machine,” and both “Daddy’s Home” movies,” directed the film, which is loosely based on his own experiences.

In limited release, Universal is getting a head start on “Green Book,” showing the awards-bait film in 25 venues before it opens wide on Nov. 21. Viggo Mortensen and Mahershala Ali co-star in the “Green Book,” which won the audience award at the Toronto Film Festival. The title gets its name from “The Negro Motorist Green Book,” a segregation-era guide to help African Americans deal with racial discrimination and Jim Crow laws, such as whites-only establishments they might encounter on the road. Directed by Peter Farrelly and co-produced by Participant and DreamWorks, “Green Book” follows a bouncer who takes a job chauffeuring a famed black pianist as the duo forms a close bond while on the road. Mortensen has been the subject of controversy after he used the N-word during a panel discussion promoting the film (he was making a point about how far society had come in the decades since Jim Crow). He has since apologized.

Elsewhere, CBS Films is opening “At Eternity’s Gate” in four locations in New York and Los Angeles. Willem Dafoe portrays Vincent van Gogh in the drama about the final days of the impressionistic artist’s life.

With “The Grinch” still expected to draw in family crowds, the box office should see another strong showing as multiplexes ready for a busy Thanksgiving frame. Next weekend, “Creed II,” with Michael B. Jordan and Sylvester Stallone; Disney’s animated “Wreck-It Ralph” sequel, “Ralph Breaks the Internet;” and Taron Egerton’s “Robin Hood” enter theaters.