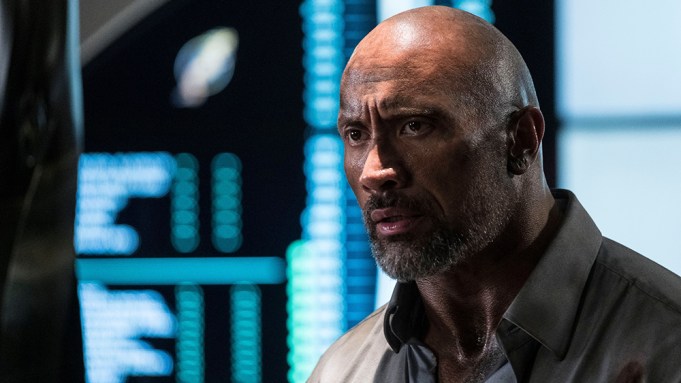 The domestic box office will be a battle between the Rock and a tropical place.

New entries “Hotel Transylvania 3: Summer Vacation” and Dwayne Johnson’s “Skyscraper” will compete with the second weekend of “Ant-Man and the Wasp” as all three head for $30 million-plus outings. The two box office newcomers hope to offer audiences something different during a popcorn season dominated by Spandexed heroes and raging dinosaurs, but this weekend’s results look to be a cliffhanger.

“Hotel Transylvania 3” looks to check in with around $38 million, though it could make as much as $48 million when it opens in 4,200 locations. The latter part of that range would be in line with the debut of its predecessors. “Hotel Transylvania” bowed in 2012 with $42 million, while its 2015 follow-up got a slight headstart with $48 million. The two animated features pocketed $358 million and $473 million worldwide, respectively. Each film in the franchise has had an $80 million price tag. “Hotel Transylvania 3” began its international rollout in late June, where it has made $5.9 million.

The series’ third installment picks up shortly after the sequel, with Count Dracula and family leaving their hotel behind to embark on a luxury monster cruise ship. Adam Sandler, Andy Samberg, and Selena Gomez are reprising their voice roles, while Kathryn Hahn and Jim Gaffigan have also joined the cast. Genndy Tartakovsky returned to write and direct “Hotel Transylvania 3,” based on Todd Durham’s series. “Hotel Transylvania 3” has the highest Rotten Tomatoes score of the trio, averaging 70%. The first film landed a 44% rating, and the second fared slightly better with 55%.

If estimates hold for “Hotel Transylvania 3,” the Sony-Columbia animated comedy could top “Skyscraper,” which is reaching for $33 million to $40 million from 3,700 theaters. As one of the summer’s lone releases that isn’t a superhero flick or part of a franchise, “Skyscraper” will test the power of Johnson’s box office draw. The film has received mixed reviews, averaging a tepid 55% on Rotten Tomatoes. Though he’s definitely proven his star power with massive hits including “Jumanji: Welcome to the Jungle,” “Moana,” and “The Fast and the Furious” franchise, “Skyscraper” should be more of a modest release for the former WWE star. It should launch in line with Johnson’s recent titles, “Rampage” and “Central Intelligence.” Those films each opened with $35 million.

Universal is banking on Johnson’s massive overseas following to justify the film’s $125 million budget. The movie opens day-and-date in 56 international markets. It launches in China, where the film is set, on July 20.

In “Skyscraper,” Johnson plays a former FBI agent-turned-security consultant Will Sawyer, who is on assignment in China to evaluate the newly dubbed world’s tallest building. The assignment goes awry when terrorists set the 240-floor skyscraper ablaze, while Sawyer’s wife (Neve Campbell) and children are still inside. “Skyscraper” features Johnson in peak Rock-mode — climbing 100-story tower cranes and scaling monuments — to save his family.

“Ant-Man and the Wasp” will be putting up a fair fight of its own. Marvel’s latest installment, which debuted with $75 million, should bring in another $30 million in its second outing. The Paul Rudd and Evangeline Lilly-led sequel has pocketed $168 million globally, including $86 million in North America. Given its $162 million production budget, “Ant-Man and the Wasp” already looks like another score for Marvel.  The studio has had a string of box office hits in 2018 with “Avengers: Infinity War” racking up over $2 billion and counting, and “Black Panther” passing $1.3 billion globally.

Elsewhere, Annapurna’s “Sorry to Bother You” is hoping to break out of the specialty market. Boots Riley’s futuristic dark comedy — starring Lakeith Stanfield, Armie Hammer, and Tessa Thompson — is expanding to 805 theaters this week. It earned $717,302 from just 16 locations last weekend, landing it the best per-screen-average in months with $44,881.

At the specialty box office, “Eighth Grade,” a coming-of-age story from first-time director Bo Burnham, is bowing in limited release. A24 picked up the title, which opened to raves at this year’s Sundance Film Festival and boasts a 98% on Rotten Tomatoes.