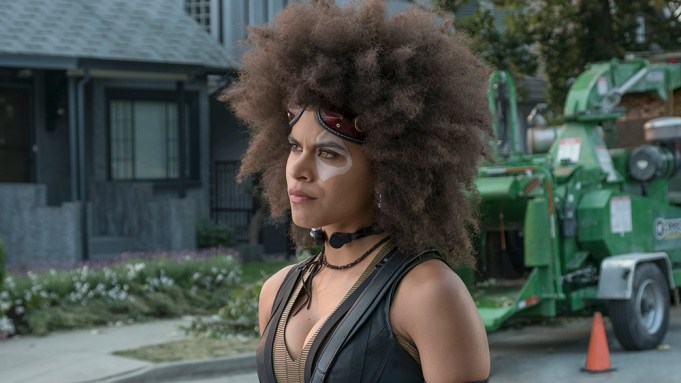 First Friday estimates ranged from $128 million to $137 million. “Deadpool 2” started its run by smashing the record for a Thursday night preview gross for an R-rated film with $18.6 million, topping the previous mark of $13.5 million set by “It” in September. Twentieth Century Fox’s superhero sequel will end “Avengers: Infinity War’s” three-week rule, with forecasts in the $130 million to $150 million range on 4,349 screens for its opening weekend — the widest launch ever for a Fox title.

The movie should gross at least $50 million on Friday, including the Thursday night previews.

Paramount’s comedy “Book Club” is outperforming forecasts for a $16 million launch this weekend, and Global Road’s “Show Dogs” should fetch about $6 million, in line with earlier estimates.

“Deadpool 2” will also set a record for the top gross for a movie in a mid-May weekend, topping the 2007 mark set by “Shrek the Third” at $121 million. The best mid-May weekend in overall business took place in 2015 with $184 million, led by “Pitch Perfect 2” opening at $69 million, according to comScore.

The original “Deadpool” stunned the industry two years ago with a $132.4 million debut weekend, which remains the record for an R-rated title, so the sequel may also exceed that mark. The original’s unique take on the superhero genre, with Reynolds breaking the fourth wall to address the audience directly, made the film a must-see, and it went on to earn $363 million in North America and $783 worldwide, making it the highest-grossing R-rated movie of all time.

Reviews for “Deadpool 2” have been mostly laudatory with a current rating of 85% on Rotten Tomatoes. “In almost every respect, this sequel is an improvement on its 2016 predecessor: Sharper, grosser, more narratively coherent and funnier overall, with a few welcome new additions,” said Andrew Barker in his review for Variety.

Disney-Marvel’s fourth weekend of “Infinity War” should take in around $33 million in its fourth frame. The blockbuster topped “Jurassic World” earlier this week to become the fourth-highest grossing film at the worldwide box office with $1.686 billion. Domestic earnings as of May 17 hit $566.3 million, while international touched $1.14 billion for a $1.7 billion global total.

“Book Club,” starring Diane Keaton, Jane Fonda, Candice Bergen, and Mary Steenburgen as four friends who read “Fifty Shades of Grey” and get inspired to spice up their lives, had been forecast to launch moderately with $7 million to $10 million at 2,781 sites. “Club” should finish well ahead of the sophomore frame of Melissa McCarthy’s “Life of the Party” for third place.

The preview number for “Book Club” was $625,000, similar to another senior-centered comedy, “Going in Style,” which scored $600,000 in previews last year on its way to an $11.9 million opening weekend. The film has received mixed reviews and carries a 58% rating on Rotten Tomatoes.

“Life of the Party” should finish fourth with about $8 million.

“Infinity War” and “Black Panther” have been the key titles in lifting the overall domestic box office to $4.35 billion this year as of May 16, up 3.8% over 2017, according to comScore. Moviegoing should be robust over the upcoming Memorial Day weekend with the opening of Disney’s “Solo: A Star Wars Story.”