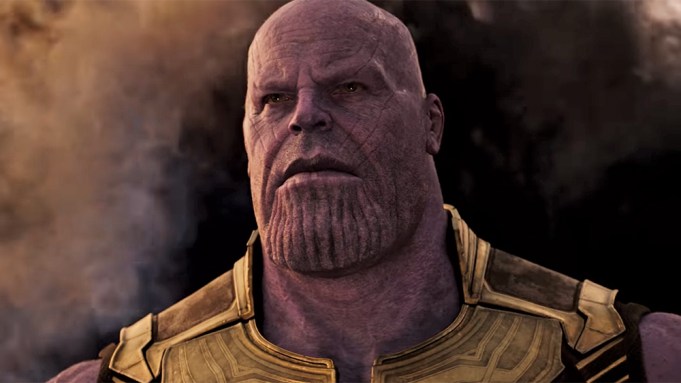 “Avengers: Infinity War” can check off yet another record: The second-highest second weekend of all time.

Disney and Marvel’s latest collaboration earned $112.5 million from 4,474 locations in its second frame. The 56% decline was just enough to top the record previously held by fellow Marvel title “Black Panther,” which made $111.6 million in its second weekend. 2015’s “Star Wars: The Force Awakens” still holds the prize for biggest second weekend with a mighty $149 million. Only five films have ever hit the $100 million-mark in their second weekends.

In just North America, the superhero mashup has made $450.8 million. It made $162.6 million internationally for a global weekend total of $275.1 million. Among “Infinity War’s” numerous accomplishments is being the fastest film to gross $1 billion, in just 11 days. And the film has yet to open in China.

One of three weekend releases opening in “Infinity War’s” almighty wake is “Overboard,” anchoring in the second spot with a solid $14 million in 1,623 theaters. The MGM and Lionsgate Pantelion remake of Goldie Hawn-Kurt Russell’s classic romcom of the same name now stars Anna Faris and Eugenio Derbez. That three-day estimate washes in slightly ahead of Derbez’s last leading role, “How to be a Latin Lover,” which bowed with $12 million in 2017. “Overboard” is currently averaging a bleak 30% on Rotten Tomatoes. The audience score, however, is faring better with a 76%.

“We’re extremely excited,” Jonathan Glickman, president of the motion picture group at MGM, said. “We wanted to make a movie that reflected the look of the country. At the end of the day, people want to see versions of themselves.”

He added, “That’s where Eugenio was smart to come up with this particular take of a rich billionaire leading man, who we haven’t necessarily seen frequently in American films.”

Slipping to No. 3 in its fifth weekend is Paramount Picture’s “A Quiet Place.” John Krasinski’s horror thriller made $7.5 million in 3,413 locations, bringing its domestic total to an impressive $159.8 million. The third weekend of Amy Schumer’s “I Feel Pretty” secured the fourth slot with $4.9 million from 3,232 theaters. Its North American tally currently sits at $37.8 million. Rounding out the top five is Dwayne Johnson’s “Rampage.” The Warner Bros. film grossed $4.6 million in 3,151 locations. In four weeks, it has made $84.7 million in North America.

“Black Panther” likely saw another boost from “Infinity War.” The Chadwick Boseman-starrer landed in sixth place, taking in $3.2 million from 1,641 locations in its 12th weekend. To date, “Black Panther” has made $693 million in North America.

Focus Features’ “Tully,” with Charlize Theron, Mackenzie Davis, Mark Duplass, and Ron Livingston, debuted with $3 million in 1,353 theaters. Despite its soft opening, the comedy-drama directed by Jason Reitman and written by Diablo Cody has garnered a solid 89% certified rating on Rotten Tomatoes.

The final weekend opener, Electric Entertainment’s “Bad Samaritan,” launched with a dismal $1.6 million from 2,007 locations. Dean Delvin’s thriller starring David Tennant, Robert Sheehan, and Kerry Condon has a B- CinemaScore, along with a 56% critical rating on Rotten Tomatoes.

In limited release, “RBG,” the documentary following the life of Supreme Court Justice Ruth Bader Ginsburg, opened with $506,000 on 34 theaters for a per-screen average of $16,471.

Thanks primarily to “Avengers: Infinity War,” the year to date box office is up 5.2%, according to comScore.