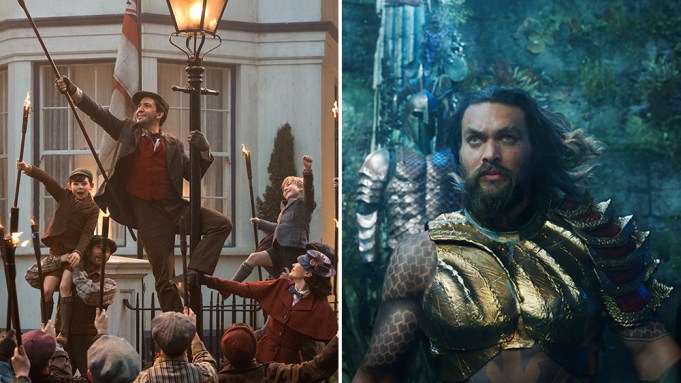 It’s the most wonderful time of the year, and the most competitive time at the multiplexes. This weekend sees two very different heroes vying for the box office crown with “Aquaman” and “Mary Poppins Returns” both eyeing sizable debuts.

“Mary Poppins Returns” is getting a head start by opening on Wednesday, though estimates show “Aquaman” is swimming toward the No. 1 spot when it launches on Friday alongside “Bumblebee,” “Welcome to Marwen,” and “Second Act.” Jason Momoa stars as the Atlantean King in “Aquaman,” the latest DC entry that could make as much as $65 million to $72 million during its first three days of release. Box office watchers anticipate that number could float up to $120 million through Christmas, which falls on a Tuesday this year.

If its overseas reception is any indication, “Aquaman” could make a big splash during its Stateside debut in over 4,000 venues. The superhero adventure directed by James Wan has already generated $266 million in China in the two weeks before its U.S. launch. Its $93 million start ranked as the best bow for a DC installment in the Middle Kingdom, which could be good news for Warner Bros., given the comic-book universe’s notoriously unwieldy track record. “Aquaman” reviews have been decent — a big relief for any film featuring a founding member of the Justice League. Now it needs word-of-mouth to help it expand beyond its core of fanboy and fangirl supporters. Amber Heard, Nicole Kidman, and Willem Dafoe round out the cast.

“Aquaman” cost a hefty $200 million to produce and is Warner Bros.’ first DC stand-alone adventure since 2017’s “Wonder Woman,” which opened with a massive $103 million. Should projections hold, a number around $65 million would be on the lower side for the studio’s recent slate of Lycra-touting heroes, a group that includes “Batman v Superman: Dawn of Justice” ($166 million) and “Justice League” ($93 million). That being said, there’s no need to sound the alarm. “Star Wars” aside, the end of the year usually fields smaller opening weekends that have a long life at multiplexes during the holidays. The lack of a “Star Wars” movie for the first December since 2014 means studios are banking on a handful of would-be blockbusters to pick up the slack and carry the domestic box office to new heights.

That brings us back to “Mary Poppins Returns,” the latest live-action update of a Disney classic. It’s been 54 years since Julie Andrews floated into moviegoers hearts, and the Magic Kingdom is hoping audiences haven’t lost their taste for a spoonful of sugar. Emily Blunt assumes the iconic nanny’s magical umbrella in this rendition that could bring in between $54 million and $75 million from 3,900 theaters over its first five days. That number could cross the $100 million mark by Tuesday, according to industry analysts.

Unlike previous Disney hits that reimagined animated classics (“Beauty and the Beast” and “Jungle Book,” to name a few) this go-around is a sequel to the 1964 classic and takes place over two decades after the events of the first film. This version introduces some new characters, including a lamplighter named Jack (Lin-Manuel Miranda) and Poppins’ wacky and downright delightful cousin Topsy (Meryl Streep). Emily Mortimer and Ben Whishaw play the adult Banks children, and Dick Van Dyke, who famously portrayed Poppins’ closest friend Bert in the original film, has a cameo. Rob Marshall, who previously teamed with Blunt and Disney on “Into the Woods,” handled directing duties on the film, which has a $130 million production budget. Audiences won’t be tapping their feet to iconic tunes like “Supercalifragilisticexpialidocious” and “Spoonful of Sugar,” because the new movie features all new music from Marc Shaiman and Scott Wittman.

While “Mary Poppins Returns” looks to be the de facto choice for moviegoers with young kids, “Aquaman’s” fiercest competition looks to be “Bumblebee,” an origin story from Paramount’s “Transformers” universe. “Bumblebee’s” biggest obstacle will be its competitive release date, and its expected to bring in roughly $30 million from 3,500 screens over the weekend and around $45 million for the Friday-Tuesday stretch.

“Transformers: The Last Knight” was the last in the series to hit the big screen. It debuted in summer 2017 with $44 million and earned $605 million globally, the worst returns yet for the sci-fi franchise. The good news, for the studio at least, is critics seem to actually enjoy the prequel and director Travis Knight’s take has garnered some of the best reviews yet. It’s the first “Transformers” movie that Michael Bay didn’t direct, though he’s still on board as a producer. Hailee Steinfeld and John Cena star in “Bumblebee,” which carries a $100 million price tag, making it much cheaper to produce than the Bay films. Let’s hope this autobot has enough gas for a lengthy ride in theaters.

For those looking to watch something other than CGI spectacles and lavish musical numbers (we won’t judge), “Welcome to Marwen” and “Second Act” are joining the festive race with mixed results, each targeting three-day hauls between $7 million and $13 million.

DreamWorks and Universal’s “Welcome to Marwen” will play in 1,900 theaters. Steve Carell stars as aspiring artist who is violently assaulted by five men after he told them he likes cross-dressing. “Forrest Gump” director Robert Zemeckis co-wrote and helmed the biographical drama, based on the 2010 documentary “Marwencol.”

That leaves STX’s “Second Act,” a romantic comedy with Jennifer Lopez, Vanessa Hudgens, Leah Remini, and Milo Ventimiglia that is launching in 2,500 venues. Directed by Peter Segal, it follows Lopez as a 40-year-old who gets a chance to climb the corporate ladder after her fake resume lands her a job at a major business. “Second Act” carries a $16 million price tag, while “Marwen’s” production budget is much higher, clocking in at over $40 million.

And it only gets more crowded from here — “Vice,” Adam McKay’s scathing look at former vice president Dick Cheney, and Will Ferrell and John C. Reilly’s comedy “Holmes and Watson” are getting in on the fun, hitting theaters on Christmas Day.

As one of the busiest times of year for moviegoing approaches, the domestic market is steadily on pace toward a banner year. North American ticket sales hit $11 billion earlier this month, the fastest its ever hit that milestone, and 2018’s bounty is currently 5.8% ahead of 2016’s $11.4 billion record. Talk about Yuletide cheer.