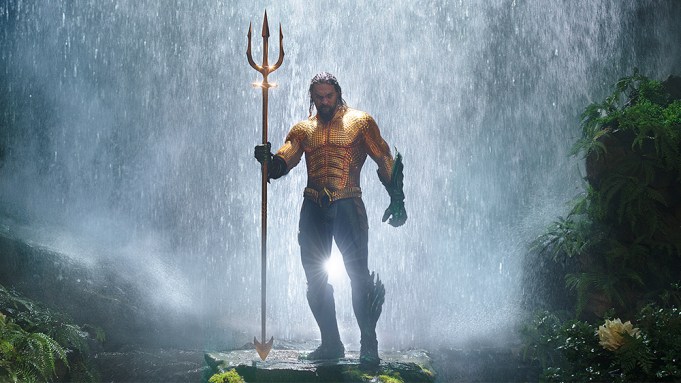 “Aquaman” retained its reign at the international box office for the third consecutive weekend, generating another $91.3 million from 70 overseas territories.

James Wan’s superhero adventure starring Jason Momoa has now amassed $482.8 million, with $410.7 million of that number coming from foreign markets. China accounted for $23.3 million of this weekend’s bounty, bringing “Aquaman’s” haul in the Middle Kingdom to a massive $232.8 million. Among new openings, Korea led with $9.9 million, followed by France with $6.2 million, Brazil with $5 million, and Germany with $4.2 million. The aquatic adventure bows next in Australia and Italy, ending with Japan on Feb. 8.

Another Spandexed hero was still able to have a good weekend at multiplexes as “Spider-Man: Into the Spider-Verse” racked up $38 million in 53 markets. Sony’s animated flick secured the No. 1 slot in China with a debut of $26.1 million, ranking as the best foreign animated opening of the year in that territory. “Spider-Verse” has made $64.8 million internationally and $64 million in North America.

Meanwhile, “Bumblebee” earned $31 million when it launched in 38 markets. Paramount’s “Transformers” origin story debuted in North America with $21 million for a global start of $52 million. Directed by Travis Knight and starring Hailee Steinfeld, “Bumblebee” saw the best returns in Russia and Indonesia with $4.9 million per location, along with Mexico ($3.9 million), Australia ($2.8 million), and Malaysia ($2.6 million).

Universal and Illumination’s “The Grinch” continues to cash in on the holiday spirit, bringing in $23.7 million from 68 territories for an overseas haul of $169.3 million. That takes the Dr. Seuss tale past $400 million globally, including $253.2 million in the states. “The Grinch” opened this weekend in Russia with $4.2 million, Korea with $1.4 million, and Ukraine with $500,000.

Rounding out the top five is Disney’s “Mary Poppins Returns,” which debuted with $20.3 million from 17 international territories. The live-action sequel starring Emily Blunt and Lin-Manuel Miranda launched in North America with $22.2 million over the weekend and $31 million during its first five days of release. That takes its global total to $51.3 million. “Mary Poppins Returns” had the best start in the United Kingdom with $9.4 million. The magical nanny also saw solid ticket sales in Italy ($2.8 million), France ($2 million), and Germany ($1.9 million).