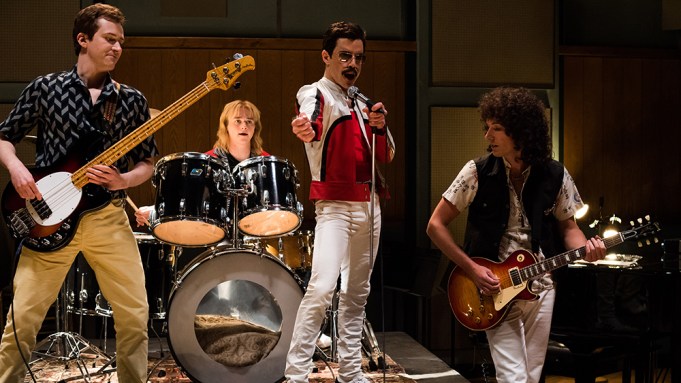 “Bohemian Rhapsody” is heading for a rhapsodic debut from 4,000 North American locations with an estimated $46 million.

“Bohemian Rhapsody” is sitting at a 59% on Rotten Tomatoes, with an A CinemaScore.

Christmastime pic “The Nutcracker and the Four Realms” should debut in second with about $18 million from 3,766 domestic sites. That marks a disappointing start for the Disney film, which stars Keira Knightley and has an estimated production budget of well over $100 million.

Tyler Perry’s “Nobody’s Fool,” starring Tiffany Haddish, is headed for a roughly $12 million opening from 2,468 theaters. Paramount’s latest comedy earned $4.8 million Friday. Tika Sumpter, Omari Hardwick, Mehcad Brooks, Amber Riley and Whoopi Goldberg also star in the film, which was directed and written by Perry. Though “Nobody’s Fool” is resting at a 25% on Rotten Tomatoes, it’s earned an A- CinemaScore among moviegoers. Haddish stars as a recently paroled woman who sets out to help her sister (Sumpter) get revenge on a man who catfished her.

Holdovers “A Star Is Born” and “Halloween” should battle for fourth, each adding another $10 million to its total.

Warner Bros.’ “A Star Is Born,” now in its fifth weekend, has so far earned $157 million domestically, with another $106 million overseas. Jamie Lee Curtis’ “Halloween” reboot broke records in its debut weekend two weeks ago, landing $76 million — the highest opening for a movie led by a woman over 55, a horror movie with a female lead, a Halloween franchise film, and the second-highest opening for an October film. It’s earned $142 million domestically, and $46 million internationally.