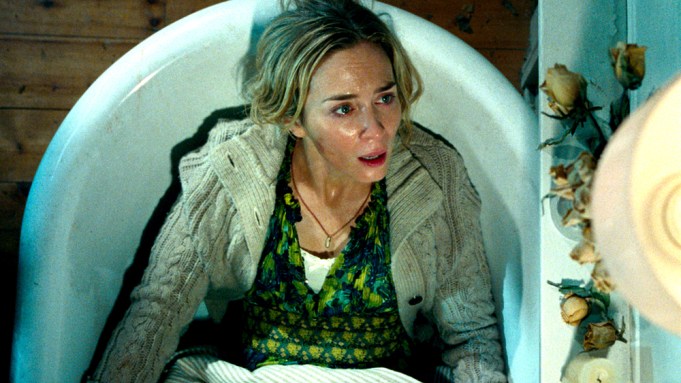 “Blockers” and “A Quiet Place” are both hoping to leverage film festival raves into box office success when they open in theaters next month.

On paper, the two films couldn’t be more different. “Blockers,” is a bawdy R-rated comedy about a group of high school girls’ efforts to lose their virginity on prom night. Think of it as a feminist spin on “Superbad.”

In contrast, “A Quiet Place” is a brutal thriller about a dystopian future in which arthropod-like monsters hunt humans using their superior sense of sound. It also functions as a meditation on parenthood and paranoia.

Despite their stylistic differences and divergent subject matters, the two movies share more than just a common release date of April 6. They’re trying to prove that audiences will come out for a movie that isn’t “Black Panther.” So far this winter, that’s the only film that’s really been able to tap into the cultural zeitgeist. Other new entries, such as “Red Sparrow” and “Pacific Rim Uprising” have largely gotten the cold shoulder from audiences.

Analysts think that “A Quiet Place” and “Blockers” will fare better, and with budgets of $17 million and $21 million, the pictures represent modest risks for their backers. Part of the optimism stems from their experiences at SXSW, where the movies received a raucous response from audiences. Buzz for the films has been building since they screened at the Austin-based gathering, but history is rife with examples of movies such as “Everybody Wants Some” and “Scott Pilgrim vs. the World” that were embraced in festivals like SXSW or Comic-Con, only to fail to attract a great deal of mainstream attention in their theatrical release.

“Huge awareness doesn’t always translate to big box office,” Paul Dergarabedian, a film analyst a comScore, warned. “You can have movies that everyone is talking about, but people still have to want to see the movie.”

Though Dergarabedian says it will be a highly competitive weekend, he believes that people are hungry for a good horror movie or comedy.

“Horror movies and comedies generally can find an audience,” he said. “They are the best to see in the communal environment of a movie theater. There is an electricity that’s created in the air when a bunch of people are scared, likewise when people are laughing or discovering something humorous for the first time.”

With two weeks to go, there’s still a wide range of projections on where the films will open. Universal’s “Blockers” is eyeing a release between $13 million and $21 million, while Paramount’s “A Quiet Place” is tracking to open between $16 million and $30 million.  If the films land on the higher end of those estimates it will be a major win for their producers and help ensure they will be profitable.

Shawn Robbins, chief analyst at BoxOffice.com, thinks the it’s risky to open against one another. He notes their mature content means that they may lean heavily on the same older teen and adult crowds, which could result in some cannibalization.

“The downside here is there’s the potential they share a lot of the some audience,” said Robbins.

John Krasinski, who also co-wrote, directed and executive produced “A Quiet Place,” stars along with his wife, Emily Blunt. This marks their first on-screen collaboration, a fact that could draw more awareness and interest in the film, particularly as they play a married couple.

It also helps that the picture isn’t just a gore-fest, analysts say. While horror movies are having a moment at the box office, given the acclaim of Jordan Peele’s Academy Award winning “Get Out,” and M. Night Shyamalan’s “Split” and Andy Muschietti’s “It,” the genre-bending “A Quiet Place” could add another twist on horror to work in the film’s favor.

“If you have too many similar in a genre, people can get burned out,” Dergarabedian said. “It’s better to differentiate.”

“Blockers” stars Leslie Mann, Ike Barinholtz and John Cena as parents who stumble upon their daughters’ pact to have sex and are determined to foil their plans. In his review for Variety, Owen Gleiberman called the movie “a prom-night comedy that’s as elegantly witty as it is deliriously raunchy.”

“If you look at the movies that are doing well this year, most have been female-led or feature diversity in their cast,” Dergarabedian said. “This just perfectly dovetails into 2018, which is becoming the year of diversity at the box office.”

“Blockers” director Kay Cannon, who created Universal’s successful “Pitch Perfect” franchise, gives the film “even more street cred,” Dergarabedian said. Universal has had a solid track record with R-rated comedies with “Bridesmaids,” “Trainwreck,” and 2017 breakout hit “Girls Trip.” But the genre has largely stumbled in recent years, with the likes of “Snatched,” “The House,” and “Rough Night” all bombing. If “Blockers” sees a strong release, it could signal a return to form for risqué humor.

Even if both films fail to ignite in their initial weekends, there’s a chance that word-of-mouth could help them eventually find their niche.