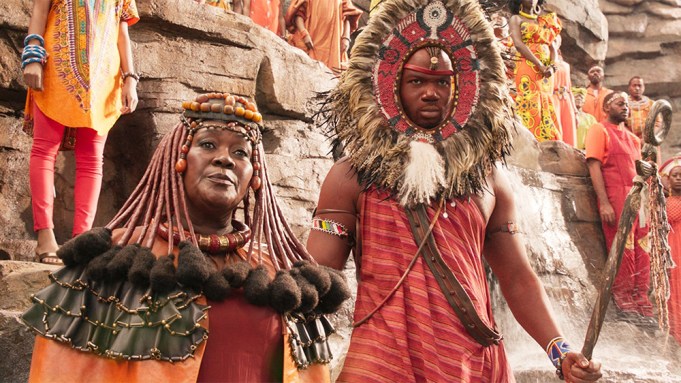 Disney-Marvel’s “Black Panther” has topped a trio of blockbusters — “The Lion King,” “Pirates of the Caribbean: Dead Man’s Chest” and “The Hunger Games: Catching Fire” — to become the 17th highest domestic release in only 13 days.

“Black Panther” took in $6.8 million on Wednesday, lifting its North American total to $428.7 million. It’s now $7 million behind “E.T. — The Extraterrestrial” for the 16th spot.

The superhero tentpole also grossed $8.3 million internationally on Wednesday to push the worldwide take to $763.3 million, surpassing “The Amazing Spider-Man.”

“Black Panther,” starring Chadwick Boseman and directed by Ryan Coogler, has blown past last month’s tracking that showed it would open domestically in the $100 million-to-$120 million range. Instead, it launched with $242 million on Presidents Day weekend and followed with $111.7 million in its second frame.

Recent forecasts place “Black Panther” with $55 million and $75 million in North America to dominate the box office again in its third weekend. That list is currently headed by “Star Wars: The Force Awakens” at $90.2 million, followed by “Avatar” at $68.5 million, and “The Avengers” at $55.6 million.

It could become one of only 10 movies to cross the $500 million domestic mark by the end of the upcoming weekend.