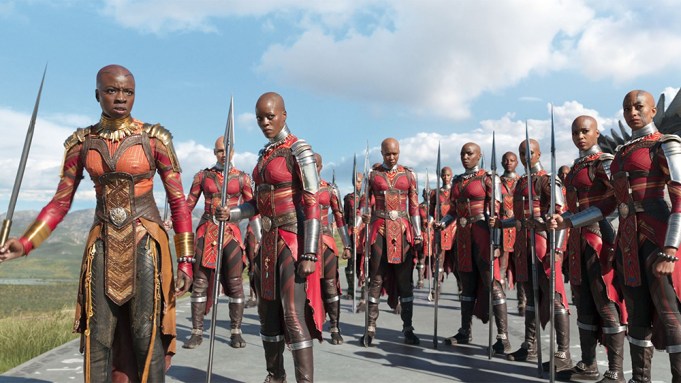 Disney-Marvel’s “Black Panther” has grossed an impressive $56.2 million in its third weekend in about 86% of international markets, lifting the superhero tentpole to $396.6 million overseas.

“Black Panther,” starring Chadwick Boseman as the king of a fictional African nation, now has a worldwide total of $897.7 million through Sunday. It’s about to become the fifth title in the Marvel Cinematic Universe to cross the $900 million mark, joining “The Avengers” at $1.52 billion, “Avengers: Age of Ultron” at $1.4 billion, “Iron Man 3” at $1.2 billion and “Captain America: Civil War” at $1.15 billion.

In less than three weeks, “Black Panther” has become 47th highest grosser worldwide and the 10th highest domestic grosser of all time with $501.1 million.

China will see the final international opening next weekend. The most recent Disney-Marvel title, “Thor: Ragnarok,” performed solidly in China with $112 million.

Jennifer Lawrence’s spy thriller “Red Sparrow” opened with $26.5 million from 8,744 screens in 65 international markets in its debut weekend for Fox. The film scored first place in 10 markets including Taiwan with $2.4 million, Spain with $2 million and Italy with $1.5 million.

Fox’s “The Shape of Water,” which has a leading 13 Academy Award nominations, took in $9.1 million from 4,419 screens in 49 markets. Its international total has hit $69 million with six additional market releases coming up including China on March 16.

Fox’s “Three Billboards Outside Ebbing Missouri,” which has seven Oscar nominations, grossed $5.5 million from 3,685 screens in 44 markets, including a China opening of $2.4 million from 815 screens. The international total has hit $79 million with four international markets still to come.

Hugh Jackman’s “The Greatest Showman” brought in $5.3 million from 1,649 screens in 25 markets. The Fox title has totaled $211.2 million internationally.