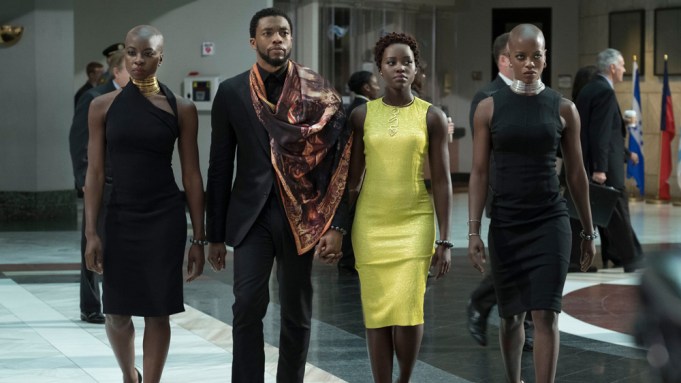 Disney-Marvel’s record-breaking “Black Panther” will retain the top spot at the box office in its third weekend, taking in nearly $64 million from 4,084 North American locations.

“Black Panther” has smashed record after record for Marvel, including yielding the fifth-highest opening weekend and second-highest second weekend of all time. It’s likely to repeat the feat for the third-highest third weekend in history behind “Star Wars: The Force Awakens” with $90 million and “Avatar” with $68 million.

The superhero tentpole, starring Chadwick Boseman, currently sits at no. 14 on the all time domestic box office chart with $451 million, behind “Avengers: Age of Ultron” with $459 million. The addition of this weekend’s take will place it at no. 10 with about $499 million, just below “Beauty and the Beast” with $504 million. This weekend will also see “Black Panther” cross $850 million worldwide.

Fox’s spy thriller “Red Sparrow,” starring Jennifer Lawrence, will nab a distant second place in its opening weekend, with about $17 million from 3,056 domestic sites, followed by MGM’s “Death Wish,” which should reel in about $11 million from 2,847 locations.

“Red Sparrow” took in $6 million in Friday previews — $1.25 from Thursday screenings — and has received mixed reviews from critics, with a B CinemaScore and a Rotten Tomatoes rating of 51%. Lawrence returned to collaborate with Francis Lawrence, who directed the final three “Hunger Games” movies. The film, written by Justin Haythe and based on a novel by Jason Matthews, centers on a Russian ballerina who’s recruited into a spy agency after suffering a career-ending injury, and faces a bleak and uncertain future.

The forecast for Bruce Willis’ “Death Wish” is somewhat below initial tracking in the $14 to $16 million range. The action film took in $650,000 on Thursday for a preview total with Friday of about $4 million.

Willis stars as a surgeon turned vigilante in the remake of the 1974 pic starring Charles Bronson, which spawned four sequels and was based on a novel by Brian Garfield. Though initial reviews have not been kind and the film sits at a 14% on Rotten Tomatoes, audiences have responded favorably to yield an 85% Audience Score.

In fourth is Warner Bros.’ comedy thriller “Game Night” with Jason Bateman and Rachel McAdams, which should bring in a little under $10 million from 3,502 sites — adding 14 theaters from the previous weekend. The film has grossed about $25 million domestically and $33 million worldwide in its first eight days and garnered positive reviews with a Rotten Tomatoes score of 82% “fresh.”

Sony’s CGI-live action “Peter Rabbit” will take in another $9 million in its fourth frame for a domestic cume of $82 million and fifth place at this weekend’s box office. The film is opening in China this weekend, which should give a boost to its $3 million international take, and is set to pass $100 million worldwide by Sunday