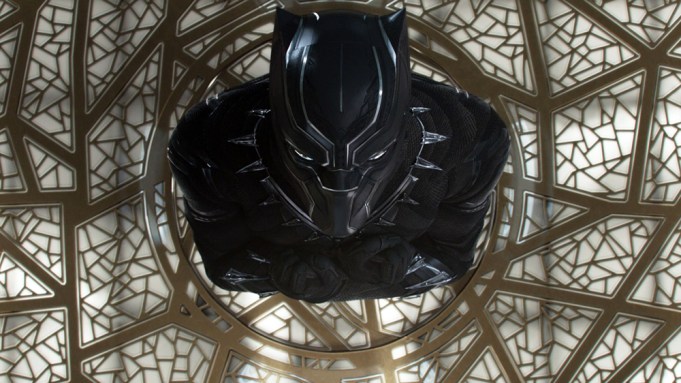 Disney-Marvel’s “Black Panther” will score a rare fifth weekend at the top of the domestic box office with $27 million from 3,834 locations, beating out Warner Bros.-MGM’s “Tomb Raider,” which will open with about $22 million from 3,854 sites.

“Black Panther” has continued to break records across the box office, having brought in $585 million domestically in its first 29 days. This weekend’s take will represent the fourth-highest fifth weekend of all time, and the first time a film has held the top spot for five weekends in a row since 2009’s “Avatar,” which dominated for a total of seven weeks.

“Tomb Raider,” a reboot of the Lara Croft franchise and starring Alicia Vikander, took in $2.1 million Thursday for a Friday total of $9 million. The current prediction is just under early tracking, which placed the action film’s opening between $23 and $25 million. As of Friday, the film has earned $45.6 million internationally, for a worldwide total of $54.6 million.

Based on the 2013 game, the film is directed by Roar Uthaug and written by Geneva Robertson-Dworet and Alastair Siddons, from a story by Evan Daugherty and Robertson-Dworet, and also stars Walton Goggins and Dominic West. Reviews have been mixed, with a 50% rating on Rotten Tomatoes and a B CinemaScore.

In third place is the second weekend of Ava DuVernay’s “A Wrinkle in Time,” starring Storm Reid, Oprah Winfrey, Reese Witherspoon, and Mindy Kaling, with almost $16 million from 3,980 theaters. The number marks a nearly 51% decline from the film’s debut.

The film tells the story behind one of Christian rock’s best-known songs, “I Can Only Imagine” by MercyMe and written by Bart Millard. Despite a 55% critics’ rating on Rotten Tomatoes, the film sports a 95% audience score. Directed by Andrew and Jon Erwin, the film stars J. Michael Finley as Millard, Dennis Quaid, and Trace Adkins.

Fox’s “Love, Simon” is set to reel in $12 million in its first weekend, landing the teen romance film in fifth. Nick Robinson stars as a closeted gay teenager who begins communicating online with an anonymous classmate. “Simon” has earned a 91% rating on Rotten Tomatoes.

“7 Days in Etebbe’s” limited release has drawn about $1.8 million from 838 locations. The film from Focus Features recounts Operation Entebbe, a 1976 mission led by Israeli soldiers to rescue more than 240 hostages from an airport in Entebbe, Uganda. Rosamund Pike and Daniel Bruhl star in the docudrama, helmed by Jose Padilha and written by Gregory Burke. Critics have not been pleased with the film, resulting in a 19% Rotten Tomatoes score.