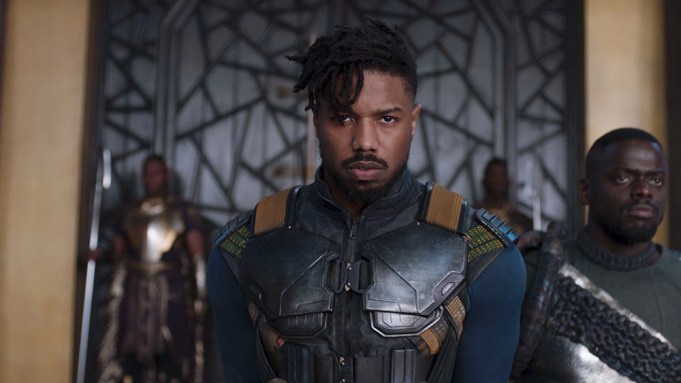 Disney-Marvel’s “Black Panther” is continuing its super-heroic run, grossing a stunning $501.1 million in North America in only 17 days and becoming the 10th highest grosser of all time.

“Black Panther,” starring Chadwick Boseman, dominated domestic moviegoing in its third weekend with $65.7 million at 4,084 locations — the third-highest weekend of all time after “Star Wars: The Force Awakens” at $90.2 million and “Avatar” at $68.5 million.

“Black Panther” is now the second-highest grossing Marvel movie of all time at the domestic box office,  surpassing  “Avengers: Age of Ultron” this weekend at $459 million and trailing only “The Avengers” at $623.4 million. “Black Panther” has a realistic shot at reaching that level in the coming weeks and may eventually top “Jurassic World” at $652 million and “Titanic” at $659 million for the third highest domestic total of all time.

Two new titles opened with moderate results that might have been higher without a must-see title like “Black Panther” in multiplexes. Jennifer Lawrence’s spy thriller “Red Sparrow” launched with $17 million at 3,056 sites for Fox and Bruce Willis’ “Death Wish” debuted with $13 million at 2,847 venues for MGM.

“Red Sparrow,” directed by Francis Lawrence, received mixed reviews with a 51% rating on Rotten Tomatoes and generated a B CinemaScore. Its audience was 53% female. “Death Wish” was poorly reviewed with a 15% score on Rotten Tomatoes.

Warner Bros.’ second weekend of comedy thriller “Game Night” followed in fourth with $10.7 million from 3,502 sites, declining 37% to edge Sony’s fourth weekend of CGI-live action “Peter Rabbit” with $10 million at 3,607 locations. “Peter Rabbit” slid only 21% and has connected with family audiences for $84 million in its first 24 days.

Paramount’s second weekend of “Annihilation” finished in sixth with $5.7 million at 2,112 venues, followed by Sony’s 11th weekend of its sturdy action comedy “Jumanji: Welcome to the Jungle” with $4.5 million at 2,313 sites. “Jumanji” has now grossed $393.2 million in 75 days.

Thanks to “Black Panther” and “Jumanji,” overall domestic box office for 2018 is up an impressive 10.9% to $2.12 billion, according to comScore.