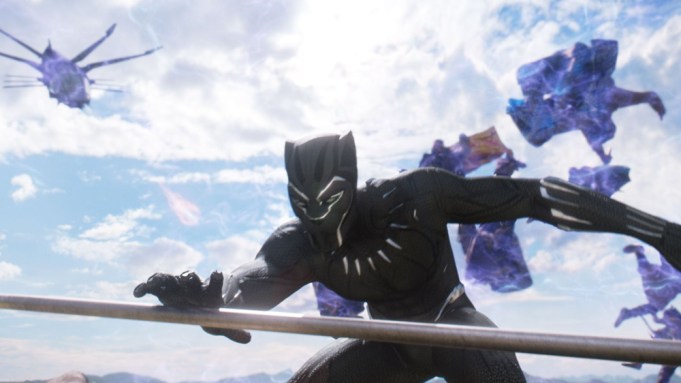 Disney-Marvel’s mega-hit “Black Panther” — which has already grossed $578.4 million domestically in its first four weeks — is heading for about $27 million at 3,942 sites, which would be the fourth-highest fifth weekend gross of all time. It will also become by Sunday the seventh film to hit the $600 million mark.

Warner Bros.-MGM’s “Tomb Raider” took in $2.1 million on Thursday night and is expected to make between $21 million and $22 million from 3,842 locations this weekend. The studio had projected an opening between $23 million and $25 million earlier this week.

Vikander stars as archaeologist Lara Croft, who embarks on a journey to solve the mystery of her father’s disappearance. Based on the 2013 game, the film is directed by Roar Uthaug and written by Geneva Robertson-Dworet and Alastair Siddons, from a story by Evan Daugherty and Robertson-Dworet.

If “Black Panther” wins, it will become the first film to hold the No. 1 spot for at least five weekends since “Avatar,” which dominated for seven weeks in 2009 and 2010.

Disney’s sophomore frame of Ava DuVernay’s fantasy “A Wrinkle in Time” will top “Love, Simon” for third place with about $16 million at 3,980 locations, declining by approximately 51% from its debut.

Fox’s “Love, Simon” and Roadside-Lionsgate’s “I Can Only Imagine” are in an unexpected battle for fourth, with about $12 million each. “Love, Simon,” which is meeting recent forecasts, stars Nick Robinson as a closeted gay teenager who begins communicating online with an anonymous classmate. “Simon” has earned a 91% rating on Rotten Tomatoes.

“I Can Only Imagine” is performing far above estimates, which had recently been elevated to as high as $8 million from an original $4 million. The drama generated a solid $1.1 million in previews on Thursday night at 1,392 locations.

The film is based on the story behind Bart Millard’s song of the same, released by his band MercyMe. The tune, which is about Millard’s relationship with his father, is the most played Christian radio single ever. The film stars J. Michael Finley as Millard, along with Dennis Quaid, Cloris Leachman, and Trace Adkins.

Focus Features’ limited launch of “7 Days in Entebbe” was not showing much traction with a project $1.7 million at 838 theaters this weekend. The thriller recounts Operation Entebbe, a 1976 mission led by Israeli soldiers to rescue more than 240 hostages from an airport in Entebbe, Uganda. Rosamund Pike and Daniel Bruhl star in the docudrama, helmed by Jose Padilha and written by Gregory Burke. Critics were unimpressed, leading to a 19% score on Rotten Tomatoes.