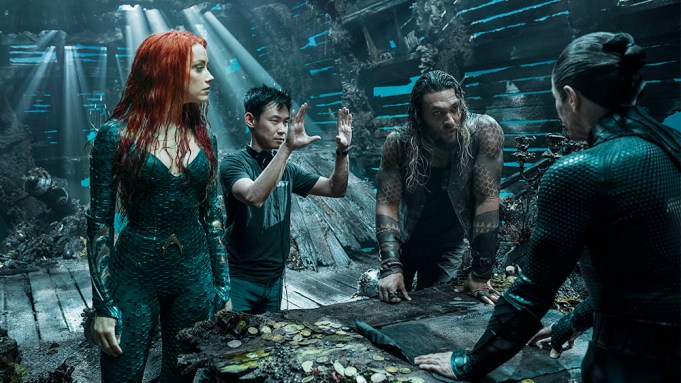 “Aquaman” easily retained its reign in North America for the second weekend in a row, dominating box office charts with $51.5 million from 4,125 locations.

That marks a decline of just 24% from its opening weekend of $72 million and brings the DC superhero tentpole past $188 million in the states. Since it’s a busy time of year for moviegoing, “Aquaman” will likely cross $200 million by New Year’s and could become Warner Bros.’ biggest film of 2018. The blockbuster, directed by James Wan and starring Jason Momoa, has surpassed $560 million overseas and nears $750 million worldwide.

There was enough holiday cheer at multiplexes to spread the wealth. Disney’s “Mary Poppins Returns” held the No. 2 spot with $28 million, a solid uptick of 28% to take ticket sales just shy of $100 million. Globally, the musical has amassed $173 million.

Paramount’s “Bumblebee” landed in third place again, picking up $21 million from 3,550 venues, a small 3% drop. The “Transformers” origin story with Hailee Steinfeld has made $67 million through Sunday.

Meanwhile, a pair of Christmas Day releases — “Vice” and “Holmes and Watson” — are neck in neck for sixth place. The former, Adam McKay’s Dick Cheney biopic, generated $7.8 million for a domestic haul of $17.7 million. The $60 million movie is banking on awards buzz to help build traction and pull in the kind of audience it needs to turn a profit. As expected, “Vice” is performing strongest on the coasts.

The latter, “Holmes and Watson,” starring Will Ferrell and John C. Reilly, brought in $7.3 million during the three-day stretch and $19.8 million since Tuesday. The good news, for the comedy at least, is its Rotten Tomatoes score has jumped from 0% to 9%. The bad news is Columbia Pictures shelled out $42 million to make the absurd take on Sherlock Holmes and Dr. Watson.

Not falling far behind is STX and Jennifer Lopez’s “Second Act.” The romantic comedy saw a gain this weekend, up 11% with $7.2 million for a domestic cume of $21.7 million.

DreamWorks and Universal’s “Welcome to Marwen” continues to have a bleak holiday, dropping to No. 14 with $2.23 million in its second outing. Robert Zemeckis directed the drama, starring Steve Carell as a man who attempts to overcome his PTSD. It’s made just $7.7 million, branding it as one of this year’s biggest flops. The movie, based on the 2010 documentary “Marwencol,” carries a $40 million price tag and stands to lose the studio over $45 million when marketing and distribution costs are considered.

A number of holdovers rounded out the top five. Sony’s “Spider-Man: Into the Spider-Verse” nabbed fourth place, amassing $18 million in its third week of release. The latest big-screen adaptation of Marvel’s web-slinging hero, which has received high praise from critics and fans alike, just crossed the $100 million mark in North America.

Fifth place went to Warner Bros.’ “The Mule” with $11.7 million from 2,787 theaters for a domestic tally of $60 million. Clint Eastwood directed and starred in the drama, which saw a 24% hike this weekend.

At the specialty box office, Participant Media’s “On the Basis Of Sex” pocketed $690,000 from 33 screens. Felicity Jones portrays a young Ruth Bader Ginsburg in the biopic, which launched on Christmas Day and has since made $1.5 million. It secured the best screen-average of the weekend with $20,877 per venue. The studio plans to expand to 100 theaters next weekend.

“Audiences across the country truly love the movie — exit polls are in the mid-90s — clearly showing the film’s sheer entertainment power,” said Lisa Bunnell, Focus Features’ president of distribution . “As a woman heading up a studio’s distribution team, a part of our industry that has traditionally been filled by men for decades, I can’t help but watch this film and know that Ruth’s work help make that possible.”

Annapurna and Nicole Kidman’s “Destroyer” also debuted on Christmas Day and took in $58,472 from three locations for a domestic total of $116,000. It scored the second-biggest screen average of the weekend with $19,491.

Elsewhere, Sony Pictures Classics’ “Stan and Ollie,” a biographical drama about comedic duo Stan Laurel and Ollie Hardy, brought in $79,674 million from five screens for an average of $15,935.

A handful of awards hopefuls got a boost over the holiday frame. Annapurna’s “If Beale Street Could Talk” earned $759,579 when it added 60 locations. Barry Jenkins wrote and directed the film based on James Baldwin’s book, which made $1.9 million in its platform release.

Focus Features’ “Mary Queen of Scots” also saw an increase in ticket sales with $2.6 million from 841 theaters in its fourth outing for a North American haul of $9 million.

Amazon Studios’ “Cold War” brought in $42,534 from three venues, bringing its tally to $141,749. Polish filmmaker Pawel Pawlikowski directed the foreign language drama, which competed for the Palme d’Or at Cannes and was selected as Poland’s foreign language entry at the Oscars.

Revenues in North America dropped 5.2% compared to the same weekend in 2017, according to Comscore, though that’s because last year benefited from the release of “Star Wars: The Last Jedi.” Even so, the domestic market is up almost 7% from last year and over 4% from 2016’s record bounty. As of this weekend, ticket sales have surpassed $11.8 billion.