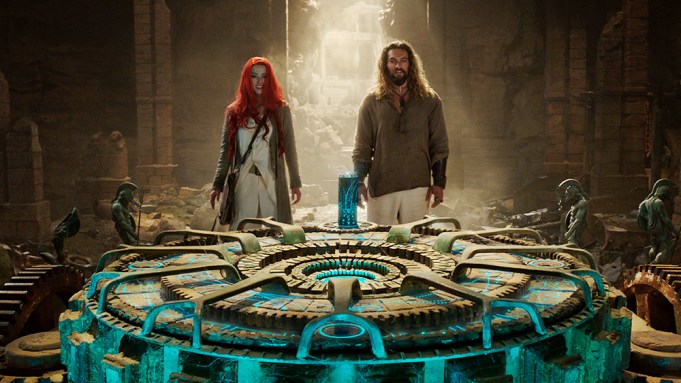 “Aquaman” has a lot to celebrate this holiday season.

James Wan’s aquatic superhero adventure with Jason Momoa was the main draw for moviegoers looking to get out of the house on Christmas Eve. The latest DC entry racked up $10.9 million on Monday, taking its domestic total to $83 million for its first four days of release. “Aquaman” crossed $500 million globally, with over $400 million of that bounty coming from overseas crowds.

The Atlantean warrior did face some formidable competition from Disney’s “Mary Poppins Returns” and Paramount’s “Bumblebee.”

Emily Blunt and Lin-Manuel Miranda co-star in “Mary Poppins Returns,” which brought in $6 million on Monday. The sequel to Disney’s 1964 classic has generated $39 million since it launched last Wednesday. It carries a $130 million production budget, so the musical is banking on a lengthy run in theaters to pull in the audience it needs to turn a profit.

“Bumblebee,” the “Transformers” origin story with Hailee Steinfeld and John Cena, picked up $3.7 million, bringing its four-day tally to $25 million.

Moviegoing typically slows down on Christmas Eve, but theaters will see a boost on Christmas Day that should carry through New Year’s. The competitive frame for moviegoing got even more crowded as “Vice,” Adam McKay’s satirical look at former vice president Dick Cheney, and Will Ferrell and John C. Reilly’s comedy “Holmes and Watson” hit theaters on Tuesday. “On the Basis of Sex,” a biopic starring Felicity Jones as a young Ruth Bader Ginsburg, and Nicole Kidman’s “Destroyer” also got in on the Yuletide spirit, opening in limited release.

It’s not all holiday cheer at theaters. Universal and DreamWorks’ “Welcome to Marwen” pulled in a meager $488,000 on Monday for a total of $2.9 million. That’s an unmitigated disaster for the drama directed by Robert Zemeckis and starring Steve Carell. It cost over $40 million to produce and looks to lose the studio around $50 million, according to rival studio executives.

As the busiest time of year at multiplexes commences, the domestic box office already reached a new benchmark. North American ticket sales hit $11.383 billion last weekend, surpassing the previous record haul of $11.382 billion set in 2016. As Mary Poppins would say, there’s nowhere to go but up.