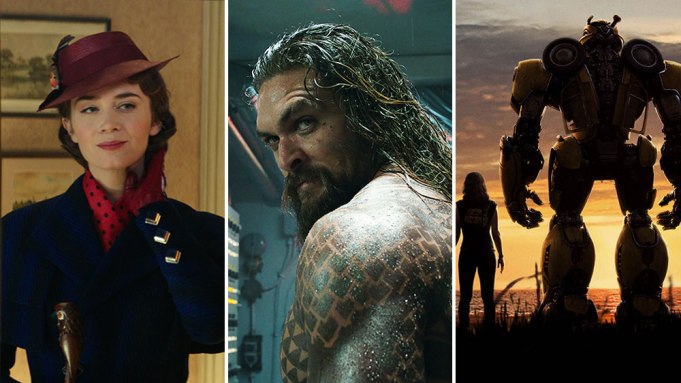 Jason Momoa’s “Aquaman” is the King of the Seven Seas — and now the box office. The DC adventure dominated in North America with a splashy $72 million debut, including previews.

Not including early showings, “Aquaman” generated $67 million from 4,125 locations during its first three days of release. That’s a hefty start during a month that, aside from “Star Wars” movies, tends to field smaller opening weekends that pick up steam as audiences have time off from work and school between Christmas and New Year’s. As expected, “Aquaman” easily fended off fellow newcomers “Mary Poppins Returns” and “Bumblebee.” Those two titles were in a close race for No. 2, though Sunday estimates show “Mary Poppins Returns” narrowly defeating “Bumblebee.”

Disney’s “Mary Poppins Returns” was the de facto choice for moviegoers with young kids, pocketing $22.2 million over the three-day frame and $31 million during its first five days of release. That ranks as one of the smallest bows for a Disney title this year, but musicals don’t traditionally see sizable opening weekends and the live-action sequel looks to have a healthy life at multiplexes during the holiday stretch. Emily Blunt and Lin-Manuel Miranda co-star in the follow-up, which brought in $20 million overseas for a worldwide start of $51 million. Rob Marshall, who previously teamed with Blunt and Disney on “Into the Woods,” handled directing duties on the film, which has a $130 million production budget.

“We weren’t aiming for the biggest opening weekend right out of the gate. Given how musicals play, it’s the perfect launching pad,” said Cathleen Taff, Disney’s head of domestic distribution. “We think it has something for everybody. It sets us up for a good holiday period.”

Paramount’s “Transformers” origin story “Bumblebee” landed in third place, generating $20.9 million from 3,550 screens. While that’s by far the lowest start for a “Transformers” title, the sci-fi prequel directed by Travis Knight has gotten some of the best reviews of the franchise and has time to build momentum in weeks to come.

“Bumblebee” is the first “Transformers” movie that Michael Bay didn’t direct, though he’s still on board as a producer. Hailee Steinfeld and John Cena star in the CGI spectacle based on the popular toys, which carries a $100 million price tag, making it much cheaper to produce than the Bay films.

James Wan directed “Aquaman,” which has already amassed $410 million overseas for a global total of $482.8 million. Over half of U.S. audiences were male, while 60% of crowds were under 35 years old. Imax screens accounted for $9.9 million of domestic ticket sales. Superhero fans were much more receptive to “Aquaman” than previous DC titles, branding this entry with an A- CinemaScore. “Aquaman” cost a hefty $200 million to produce and is Warner Bros.’ first DC stand-alone adventure since “Wonder Woman,” which opened in 2017 to a massive $103 million.

Warner Bros.’ president of domestic distribution Jeff Goldstein admits the studio’s DC Universe has stumbled in the past, but he’s confident “Aquaman” can steer the comic-book empire into clearer waters.

“We’ve had difficultly along the way, aside from ‘Wonder Woman,’ but when you look at this film on its own, we knew we had something special,” Goldstein said. “And this is just a preview, the main event really starts on Tuesday.”

STX’s “Second Act” launched in seventh place with $6.5 million from 2,607 locations. The romantic comedy starring Jennifer Lopez, Vanessa Hudgens, and Leah Remini cost $16 million to make. As anticipated, 70% of moviegoers were female, and over half were between the ages of 25 and 44.

Unfortunately for DreamWorks and Universal (and Steve Carell’s Oscar dreams), nobody was that welcoming to Marwen. Directed by Robert Zemeckis, “Welcome to Marwen” earned a measly $2.3 million when it launched in 1,900 venues. An offbeat premise made the biographical drama difficult to market, and poor reviews definitely didn’t help draw the kind of crowds that could help justify a production budget over $40 million.

“It’s a very well-crafted film, but it’s a difficult story to tell,” said Jim Orr, Universal’s domestic distribution chief. “It might take time for audiences to discover it.”

It’s been an especially rough stretch for Universal, whose expensive steampunk adventure “Mortal Engines” bowed last weekend with the ignominious distinction as one of the biggest flops of the year. A bright spot for the studio has been “The Grinch,” an animated adventure that has earned $253 million in North America and had the best hold in the top 10 this weekend, declining just 30% in its seventh week of release.

It was good news for spandexed heroes all around as “Spider-Man: Into the Spider-Verse” stayed in the top five, dropping to fourth place and adding another $16.3 million to its domestic tally. That takes its stateside haul to $65 million.

Rounding out the top five is Warner Bros.’ “The Mule,” a Clint Eastwood drama that generated $9 million during its sophomore frame and $35 million to date.

At the specialty box office, Amazon Studios’ “Cold War” got its start in three theaters, bringing in $18,575 per location and $55,727 for the weekend. Polish filmmaker Pawel Pawlikowski directed the foreign language drama, which competed for the Palme d’Or at Cannes and was selected as Poland’s foreign language entry at the Oscars.

Another awards hopeful, Annapurna and Barry Jenkins’ “If Beale Street Could Talk,” secured the best screen average of the week ($22,980) during its sophomore outing with $1114,903 from five venues.

Focus Features’ “Mary Queen of Scots” cracked the top 10 in its third weekend when the royal drama starring Saoirse Ronan and Margot Robbie expanded into 795 theaters. It picked up $2.2 million, bringing its stateside tally to $3.5 million.

Fox Searchlight’s “The Favourite” clocked in at No. 11 with $2 million from 790 locations. Yorgos Lanthimos’ dark comedy has made $10 million during its gradual nationwide release.

Even without a “Star Wars” release in December to bolster numbers, the domestic box office was able to hit a significant benchmark this weekend and surpass 2016’s record haul. Revenue crossed $11.383 billion, even before the lucrative Christmas to New Year’s stretch. This year’s ticket sales are currently pacing 7.5% above of last year and almost 5% ahead of 2016, according to Comscore.

“This very crowded weekend sets the stage for a massive final week at the nation’s multiplexes,” said Paul Dergarabedian, a senior media analyst at Comscore.