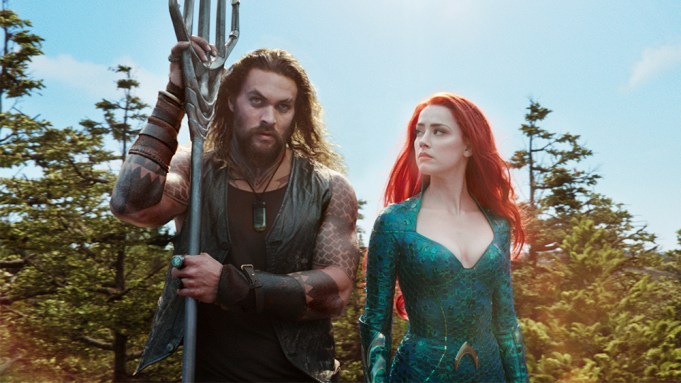 It was a very merry Christmas for “Aquaman.” Despite a competitive frame, the DC superhero dominated the domestic box office on the busy holiday.

Warner Bros.’ latest comic book adventure generated $22 million on Tuesday for a five-day bounty of $105 million. That’s one of the best Christmas Day hauls sans “Avatar” or a “Star Wars” entry. “Star Wars: The Force Awakens” still holds the distinction as best single-day showing for the holiday, racking up $49 million in 2015. Directed by James Wan and starring Jason Momoa, “Aquaman” has now grossed over $550 million worldwide.

“Aquaman” easily placed No. 1 for the holiday, though the trident-welding hero faced formidable competition from Disney’s “Mary Poppins Returns” and Paramount’s “Bumblebee.”

Emily Blunt and Lin-Manuel Miranda co-star in “Mary Poppins Returns,” which nabbed second place with $11.6 million. The sequel to Disney’s 1964 classic has now earned $50 million since it launched last Wednesday. The musical, which carries a $130 million production budget, is banking on a lengthy run in theaters to pull in the audience it needs to turn a profit.

“Bumblebee,” the “Transformers” origin story with Hailee Steinfeld, landed at No. 3 with $8.9 million for a five-day total of $34.27 million. Travis Knight directed the spinoff, which garnered some of the franchise’s best reviews yet.

Will Ferrell and John C. Reilly’s comedy “Holmes & Watson” opened on Christmas Day, placing fourth and bringing in $6.4 million. Columbia Pictures and Mimran Schur co-produced the film that is projected to make between $18 million and $20 million during its first six days of release. Ferrell and Reilly, the duo best known for “Step Brothers” and “Talladega Nights: The Ballad of Ricky Bobby,” teamed up again to play the notorious detective and his loyal biographer. The studio didn’t allow press screenings for review until the movie was released in theaters, and perhaps for good reason. It holds the rare distinction of a 0% on Rotten Tomatoes.

Rounding out the top five is Sony’s “Spider-Man: Into the Spider-Verse.” The web-slinging superhero pocketed $5.5 million on Tuesday, raising its domestic tally to $73.5 million.

Another Christmas Day release, “Vice,” launched with $4.7 million. Adam McKay directed “Vice,” a scathing look at the vice presidency of Dick Cheney (Christian Bale). Annapurna spent $60 million to make the satirical biopic. Despite its polarizing response, it has still collected a handful of plaudits, including six Golden Globe nominations.

At the specialty box office, Mimi Leder’s “On the Basis of Sex” scored the best screen average of the day. The biopic starring Felicity Jones as a young Ruth Bader Ginsburg debuted on Christmas Day and earned $466,825 from 33 venues, which comes out to $13,000 per location.

Meanwhile, “Destroyer” made $30,738 when it bowed in three theaters on Tuesday. Nicole Kidman portrays an LAPD detective in the Annapurna crime drama.

Elsewhere, STX’s “Second Act” picked up $3.07 million on Tuesday. Jennifer Lopez stars in the romantic comedy that has amassed $10 million over five days. The studio says it cost $16 million to produce.

Universal and DreamWorks’ “Welcome to Marwen” continues to flounder in the crowded marketplace. Directed by Robert Zemeckis and starring Steve Carell, the drama brought in a disappointing $1 million. That takes its North American total to $4 million, an unmitigated flop for a movie that cost $40 million to produce and looks to lose the studio around $50 million, according to rival studio executives.

The stretch between Christmas and New Year’s Day is traditionally one of the busiest frames of the year for moviegoing as audiences often hit up their local movieplex during time off from school and work. Even before the boost from “Aquaman,” “Mary Poppins,” and “Bumblebee,” the domestic box office reached a new benchmark. North American ticket sales hit $11.383 billion last weekend, surpassing the previous record $11.382 billion set in 2016.