Box Office: ‘Ant-Man and the Wasp’ Buzzing to $80 Million-Plus Debut 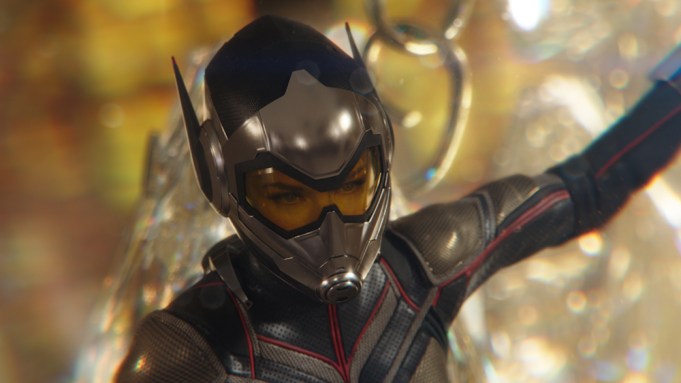 Disney-Marvel’s “Ant-Man and the Wasp” is on its way to an estimated $83.7 million opening weekend from 4,206 North American locations.

The fourth weekend of Disney-Pixar’s “Incredibles 2” will battle it out for the second place slot with the sophomore frame of “Jurassic World: Fallen Kingdom,” which are each pegged for around $30 million.

The original “Ant-Man” opened to $57 million two years ago, and went on to earn $519 million worldwide. If estimates hold, “Ant-Man and the Wasp” will be the seventh-highest domestic debut of the year, behind “Solo: A Star Wars Story’s” $84.4 million.

Rudd and Lilly reprise their roles as Scott Lang/Ant-Man and Hope van Dyne/The Wasp, respectively — superheroes able to shrink themselves into the quantum realm. The sequel sees Scott Lang grappling with the struggle of being both a superhero and a father.

The cast also includes Michael Douglas, Hannah John-Kamen, Michelle Pfeiffer, Michael Pena, Walton Goggins, and Bobby Cannavale. Peyton Reed, who oversaw the first film, returns to the director’s chair. “Ant-Man and the Wasp” has an 86% fresh score on Rotten Tomatoes. The sequel, which has a reported $130 million budget, is also opening in 48% of international markets this weekend.

“Incredibles 2” has so far earned a massive $683 million worldwide, including $475 million domestically. With this weekend’s take, it will outpace 2016’s “Finding Dory” as the highest-grossing animated film of all time with $486 million. “Fallen Kingdom” on Friday passed the $1 billion mark globally, with $699 million from international markets.

Universal’s “The First Purge” is looking to earn about $18 million from 3,031 domestic theaters in its debut for Universal. The fourth film in the “Purge” franchise opened on July 4 and earned $14 million from Wednesday and Thursday. “The Purge: Election Year” opened to $31.5 million in 2016, topped by the original “Purge” with $34 million in 2013. “The Purge: Election Year” is the highest-grossing film of the franchise, reeling in $79.2 million over its run.

“The First Purge” explains the origins of the 12-hour titular purge, which began as a sociological experiment on Staten Island designed to push the crime rate below 1% during the remainder of the year, but spreads across the nation. The Blumhouse film is currently sitting at a 52% Rotten Tomatoes score and earned a B- CinemaScore. James DeMonaco wrote the script and handed directing duties to Gerard McMurray.

“Sicario: Day of the Soldado” should bring in another $7.3 million in its second weekend to land fifth place and bring the Sony film’s domestic total to $35.3 million. The original “Sicario” earned $46.8 million over its entire run. Benicio del Toro and Josh Brolin reprise their roles as a former undercover operative and CIA agent, respectively.

Annapurna’s dystopian sci-fi comedy “Sorry to Bother You,” starring Tessa Thompson and Lakeith Stanfield, is opening in a limited 16 theaters to an estimated $695,000 for a per-screen average of about $43,000. Boots Riley wrote and directed the film in his directorial debut. The film follows a young African-American telemarketer (Stanfield) who adopts a white accent in order to thrive at his job.