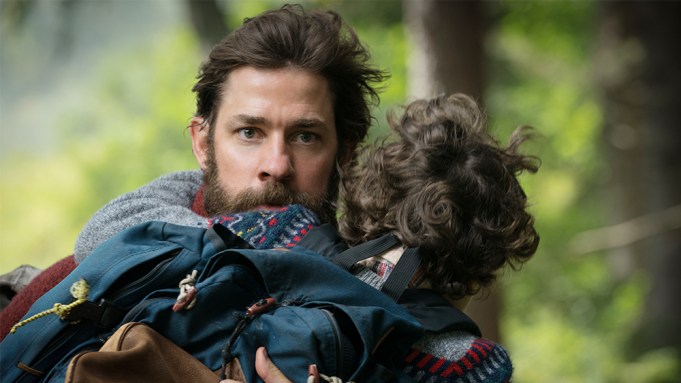 John Krasinski’s surprise hit “A Quiet Place” has returned to its No. 1 slot in its third weekend at the domestic box office with $20 million from 3,808 theaters, up 219 sites from last weekend.

“A Quiet Place” stars Krasinski and wife Emily Blunt as a couple trying to keep their family safe in a world populated by aliens that hunt based on sound. The Paramount film has grossed a respectable $116 million through Friday, including $56 million from foreign markets.

In its first seven days, Warner Bros.’ “Rampage” has earned $187 million globally to a $120 million production budget, with $141 million from overseas. Directed by Brad Peyton and also starring Naomie Harris, the film follows Johnson’s scientist David Okoye, who must join forces with his beloved albino gorilla that has accidentally become massive in order to stop two other giant monsters.

The opening weekend of Amy Schumer’s “I Feel Pretty” will likely take third with about $18 million from 3,440 locations, moderately above initial estimates in the $15 million range. The comedy from STXfilms earned about $6 million in Friday previews, with $1 million from Thursday screenings. 2015’s “Trainwreck” debuted with $30 million and elevated Schumer to star status, and 2017’s “Snatched” bowed to $19.5 million with $650,000 in previews.

“I Feel Pretty” has received a B+ CinemaScore and sits at 35% on Rotten Tomatoes, though women under 18 gave it an A+ CinemaScore and women under 25 rated it an A. The film marks writing partners Marc Silverstein and Abby Kohn’s directorial debut, and also stars Michelle Williams and Emily Ratajkowski. Schumer stars as a woman with low self-confidence who begins to see herself as beautiful after hitting her head in a spin class.

“Super Troopers 2,” the fan-funded sequel to the cult 2001 film, will earn around $15 million from 2,038 sites its opening weekend to take fourth place. The R-rated comedy from Fox is debuting more than double early estimates, which predicted a weekend tally of around $6 million, and brought in $7.9 million Friday.

Jay Chandrasekhar returns to direct, with the Broken Lizard comedy team — Chandrasekhar, Kevin Heffernan, Steve Lemme, Paul Soter and Erik Stolhanske — writing and starring in the film. The quintet plays profane Vermont state troopers with a penchant for pranks and feuding with other local law enforcement officers. “Super Troopers 2” has earned a 33% Rotten Tomatoes rating, with a significantly higher Audience Score of 64%.

“Ready Player One” and Blumhouse’s “Truth or Dare” will duke it out for fifth, each set to bring in around $7 million in their fourth and second weekends, respectively. “Ready Player One” has grossed around $480 million in its first 23 days and became Warner Bros. biggest-ever Chinese opening with $61 million.

“Truth or Dare” stars Lucy Hale and Tyler Posey as part of a group of teens who are targeted by a killer after beginning a game of truth or dare. Directed by Jeff Wadlow, Jason Blum’s latest has earned $27 million in just over a week.

Opening this weekend is Lionsgate’s Codeblack Films’ “Traffik,” which will likely earn around $4 million from 1,046 locations, in line with expectations. Written and directed by Deon Taylor, the thriller stars Paula Patton and Omar Epps, and follows a group of friends who are terrorized by a biker gang in a remote countryside home.

The weekend’s releases mark a relative calm before the storm, with Disney-Marvel’s “Avengers: Infinity War” set to give moviegoing a jump start when it opens next weekend with between $190 million and $235 million-plus.