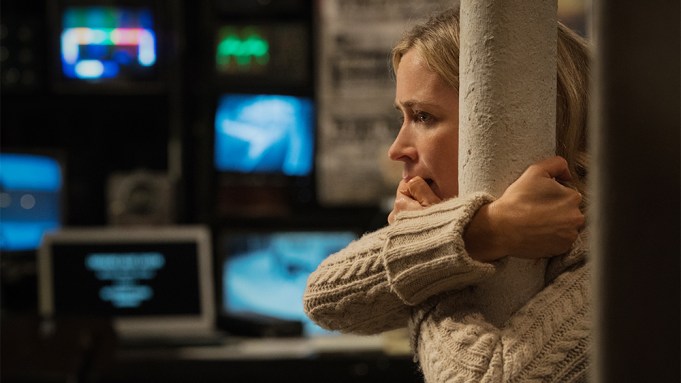 Thanks to strong word of mouth, John Krasinski’s horror film “A Quiet Place” is looking to top the box office for the second weekend in a row with $34 million from 3,589 domestic locations.

Just behind the SXSW success story is Warner Bros.-New Line’s “Rampage” with $32 million from 4,101 sites. Friday’s estimates had adjusted the Dwayne Johnson-starrer’s debut to the $27-$32 million range, with earlier tracking forecasting an opening between $35 and $40 million. “Rampage” earned $11.5 million its opening Friday, including $2.4 million from Thursday previews.

“Rampage” garnered $27.1 million on Friday from 61 markets and 38,100 screens. With that, the film has earned a cumulative $36.7 million overseas, opening at No. 1 in China as Warner Bros.’ third-highest debut in the country. Even with the international numbers, the film has a ways to go to recoup its $120 million production budget. Word of mouth could give it a push in the coming weeks, however; despite a lukewarm 50% Rotten Tomatoes score, audiences gave the film an A- CinemaScore.

“A Quiet Place’s” take marks a strong hold after debuting to $50 million last weekend, with only a 32% drop. The Paramount film earned $10.5 million on its second Friday, which puts it on its way to a more than $100 million domestic total in its first 10 days. Emily Blunt also stars in the thriller, which follows a family trying to stay safe from monsters that can only find you if they can hear you.

In the third place spot is another horror title, “Blumhouse’s Truth or Dare,” with $19 million from 3,029 locations. The Universal-distributed film stars Lucy Hale as a teenager who begins a game of truth or dare, but must struggle to survive along with her friends when someone starts picking off those who lie or refuse a dare. Critics have not loved the film, and it currently sits at a 19% on Rotten Tomatoes with a B- CinemaScore. This weekend’s take nonetheless marks a strong debut for the film, which was produced on a reported $3.5 million budget.

The third frame of Steven Spielberg’s “Ready Player One” nabbed the fourth place spot with $11 million from 3,661 locations, down 573 theaters from last weekend. The Warner Bros. film has earned $403 million globally in its first 16 days, thanks in large part to a strong international showing, particularly in China, where the film became Warner Bros.’ strongest-ever opening.

Fifth place goes to the second weekend of Universal’s “Blockers,” which will earn $10 million from 3,418 locations. Kay Cannon’s directorial debut has earned critical and audience praise for its depiction of female sexuality, and has been likened to a women-led version of “American Pie.” “Blockers,” which stars John Cena, Leslie Mann, and Ike Barinholtz, has earned $40 million in its first eight days, with $10 million from international markets.

Wes Anderson’s “Isle of Dogs” expanded to 1,939 locations and is headed for around $4 million this weekend. The film is enjoying a 91% certified fresh rating on Rotten Tomatoes, and has so far generated just a bit less than Anderson’s last outing, “The Grand Budapest Hotel,” which had earned around $18 million in its first 22 days to “Isle of Dogs'” $15 million.

Jon Hamm’s “Beirut” debuted Thursday at 755 sites and should bring in around $1 million. Set in 1982 during the Lebanese Civil War, the Bleecker Street film stars Hamm as a former U.S. diplomat who returns to service to help save a colleague from the group that killed his family. Directed by Brad Anderson, “Beirut” premiered at the Sundance Film Festival, and Rosamund Pike, Dean Norris, Shea Whigham, and Mark Pellegrino also star. The film, whose trailer received some criticism for its stereotypical portrayal of Arabs, is sitting at a 72% rating on Rotten Tomatoes.

Indie animated film “Sgt. Stubby: An American Hero” also debuted this weekend at 1,633 theaters and around $970,000. The Fun Academy film utilizes the voice talents of Logan Lerman, Helena Bonham Carter, and Gérard Depardieu, and follows the true story of the most decorated canine in American history, a stray dog who became a hero during WWI.