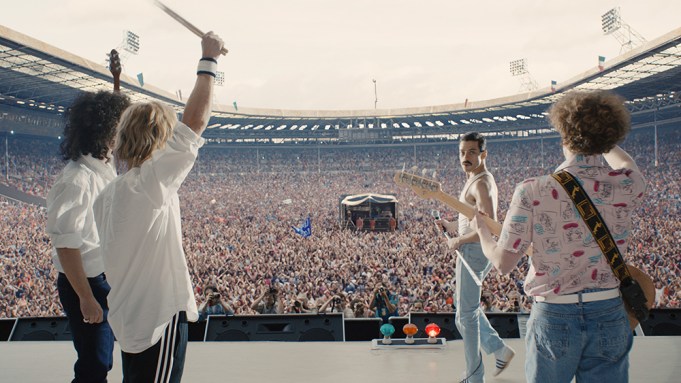 At the SAG Awards nominations Wednesday morning, “A Star Is Born” led the film pack with four nods and while that wasn’t a surprise, there were plenty of snubs and surprises that caught us off guard.

On the television side, a plethora of co-stars are competing against each other, as both male and female actors who would submit in the lead category for Emmys and Globes have been nominated against performers who would submit in the supporting category at those other awards. Since SAG combines, fewer series are seeing their titles on the ballot, as space has been dominated by multiple performers in shows such as “The Marvelous Mrs. Maisel,” “Sharp Objects” and “The Kominsky Method.”

Here, Variety breaks down the biggest snubs and surprises of the 25th annual SAG Award nominees:

SNUB: “If Beale Street Could Talk”
If there was one was sure thing going into the nominations, it was that Regina King was on track to land her first individual nod for her sublime work in Barry Jenkins’ adaptation of James Baldwin’s novel. It was also looking good for the cast to be recognized in the ensemble category. While the latter omission wasn’t totally shocking, King’s shut-out is a mystery.

SURPRISE: “Bohemian Rhapsody” lands an ensemble nomination
Even those critical of this Freddie Mercury biopic (and there are many) have praised Rami Malek’s stunning lead turn. So while it’s no surprise he landed a nomination for actor in a leading role, what wasn’t expected was for the entire cast to be recognized in the ensemble category, beating out the likes of more well-received casts like “Vice,” “Mary Poppins Returns” and “If Beale Street Could Talk.”

SNUB: Julia Roberts, “Homecoming”
The Oscar winner received a Golden Globe nom for her first series regular TV role on Amazon’s half-hour drama but was not acknowledged by her peers with a SAG nom, too, despite turning in an emotionally complex performance over two timelines in the psychological series.

SURPRISE: Julia Garner, “Ozark”
Garner is popping up just about everywhere these days and is absolutely stealing scenes when she does. In truth, she could have been nominated for a number of projects across categories here (including limited series “Maniac” and “Dirty John”), but her drama series actress nom for “Ozark” was still a surprise because it is her first major awards attention and because thus far most of the attention has been on leads Jason Bateman and Laura Linney (they also saw noms, putting Garner up against her costar Linney in the same category). File this under: the best kind of surprise.

SNUB: Donald Glover, “Atlanta”
Although his auteur FX comedy series saw an ensemble nod, Glover himself did not earn accolades despite a second season that saw him taking on more than “just” his lead role of struggling music manager Earn.

SURPRISE: John Krasinski, “Tom Clancy’s Jack Ryan”
Perennially nominated for comedy ensemble as a member of the cast of NBC’s “The Office,” Krasinski managed to crack the drama actor ballot for his turn as the titular CIA analyst Jack Ryan. Amazon made a splash with the series ahead of launch at events like Comic-Con, but much of the ongoing attention for Krasinski had been focused on his film “A Quiet Place” instead.

SNUB: Yvonne Strahovski, “The Handmaid’s Tale”
“The Handmaid’s Tale” is not wanting for SAG noms as it received a drama ensemble nod — which technically counts as a nom for Strahovski — as well as one for leading lady Elisabeth Moss and one for Joseph Fiennes. But Strahovski deserved to be recognized individually, as well, for her layered portrayal of a woman whose beliefs led her to help build the regime by which she is now imprisoned.

SNUB: “Pose”
FX’s ballroom culture drama racked up some Globe noms last week but didn’t break in with SAG, which was both surprising and unfortunate given that it is the epitome of an ensemble series that asked relative newcomers to dig deeper than most to portray men and women struggling to find love, family, fulfillment and acceptance in 1980s New York.

SNUB: “Roma,” “First Man” and “Widows” come up empty
Alfonso Cuaron’s heralded “Roma” was a bit of a longshot — as talented as the cast is, the acting isn’t particularly showy and it’s a black-and-white foreign film. Still, it’s rare to see an Oscar frontrunner completely shut out of the SAG Awards. And while “First Man” and “Widows” were never sure things, particularly in a year full of fantastic ensembles, there was hope that at least Claire Foy and Viola Davis might land noms.

SURPRISE: Emily Blunt, “A Quiet Place”
SAG voters love Emily Blunt — remember her surprise nod for “Girl on a Train”? And while her nomination in the lead category for “Mary Poppins Returns” was expected, her showing in the supporting category for the genre thriller was a pleasant surprise.

SURPRISE: Robin Wright, “House of Cards”
Wright was strong all the way through the final season of Netflix’s political drama, but the show itself failed to earn the attention it once commanded. Also touched by the scandal of sexual abuse allegations against former star Kevin Spacey, the attention it did receive was sometimes not focused on the actual work being done on the story. So it’s nice to see Wright could come out celebrated for bringing her Claire Underwood fully into the spotlight and not only holding the show together but also leaving viewers with better feelings after seeing how far she has come.

SNUB: “The Americans” stars
The series received a drama ensemble nom this year but individually, there was no love for Keri Russell or Matthew Rhys, which seems a shame given it was the last time to celebrate their star turns as 1980s Soviet spies.

SURPRISE: Bill Pullman, “The Sinner”
Pullman has portrayed Detective Harry Ambrose for two seasons on USA’s anthology series now, and the first season was a bit splashier given the weight of executive producer and star Jessica Biel returning to the small screen with the project. This is the first awards attention he has received for the role, and this is his first SAG Award nomination EVER, which should be surprising all on its own given how rich his roles have been over his decades-long career.

SNUB: Regina King, “Seven Seconds”
The “Seven Seconds” star not only saw an Emmy win for her gripping portrayal of a grieving mother in the Netflix limited series in September but also earned a Golden Globe nomination just last week. Still, she couldn’t quite sneak onto the SAG ballot in an extremely competitive race.

Snub: Nicole Kidman, “Destroyer” and “Boy Erased”
The beloved actress turned in a pair of transformative turns this year in very different movies, one lead and one supporting. But a competitive year for actresses found her shut out of both categories.

SNUB: Laura Dern, “The Tale”
Similar to King, Dern picked up both Emmy and Globe noms for her timely turn in HBO’s television movie that dealt with childhood sexual abuse. A two-time prior nominee with SAG, including one just last year for “Big Little Lies,” it seemed like she had the heat to pick up a second consecutive limited series/TV movie acting nom.

SNUB: Ethan Hawke, “First Reformed”
The actor has been racking up critical awards for his acclaimed turn as a troubled reverend in Paul Schrader’s drama. Another reminder that SAG Awards (and Oscar) voters aren’t critics.

SURPRISE: John David Washington, “BlacKkKlansman”
Virtually no one had the breakout star of “BlacKkKlansman” on their predictions, despite the fact that he anchors Spike Lee’s hit. Between last week’s Golden Globe nod and now this, Washington looks more and more on track to land his first Oscar nomination.

SNUB: Benedict Cumberbatch, “Patrick Melrose”
Cumberbatch seemed like a lock to receive a nom for his titular role as the recovering addict in Showtime’s limited series after being recognized by both the Television Academy and the Hollywood Foreign Press Assn. Plus, his peers have historically proven to love him and his performances, nominating him three times prior for individual performance awards, the most recent one being just last year for “Sherlock: The Lying Detective.”