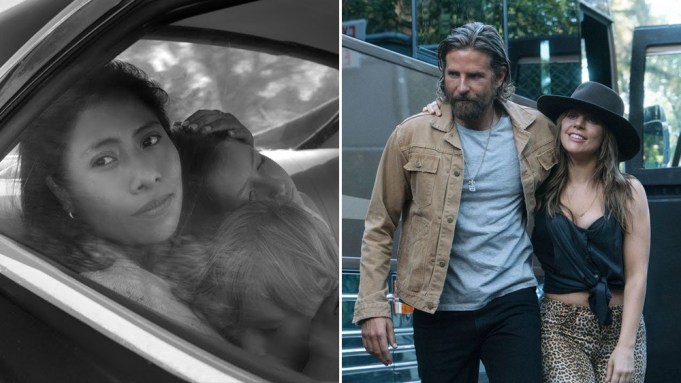 At the start of a new Oscar season, two films lead the pack that could not be more different in every way.

Academy Award-winning filmmaker Alfonso Cuarón’s Venice prizewinner “Roma” was ripped from the director’s childhood memories, shot in beautiful black-and-white with a cast of unknowns and will be presented by Netflix, the biggest streaming company in the world. Bradley Cooper’s rousing debut crossover success “A Star Is Born,” meanwhile, builds on an 80-year-old Hollywood classic, is led by a global recording superstar and is distributed by Warner Bros., the only major Hollywood studio to win a best-picture Oscar in the last 16 years.

It’s an apt note on which to begin this year’s 91st annual proceedings, a time when a diverse range of themes is particularly prized: the foreign-born art-house delicacy from a veteran, versus the hit-soundtrack-accompanied box office smash from a movie-star-turned-director. And sure to make this season a lively one, gathering in the shadow of these early leaders is an exceptional slate of contenders — from the blockbusting superheroics of “Black Panther” and the populist pursuits of Toronto People’s Choice award-winner “Green Book,” to the auteur-driven peculiarity of “The Favourite” and the hushed grace of “If Beale Street Could Talk,” to name just a few.

It’s been said in this space, but once more with feeling: It seems the Academy of Motion Picture Arts and Sciences got ahead of itself in trying to force variety on this year’s race with a “popular film” Oscar. This season’s competition is already brimming with it.

Indeed, “popular” filmmaking ought to do just fine for itself. In addition to Disney’s “Black Panther,” Universal’s “Green Book” and Warner’s “A Star Is Born,” Paramount joined the party early this season in promoting the studio’s big spring hit “A Quiet Place.” Fox’s crime drama “Widows,” from Oscar-winner Steve McQueen and which played through the roof in Toronto, could pop for the studio, along with flashy Freddie Mercury biopic “Bohemian Rhapsody.” Disney will also go big for “Mary Poppins Returns.”

Biopics will again pepper the landscape, with Universal’s “First Man” (astronaut Neil Armstrong), Focus Features’ “On the Basis of Sex” (Supreme Court justice Ruth Bader Ginsburg) and Fox Searchlight’s “Can You Ever Forgive Me?” (author Lee Israel) among those joining “Bohemian Rhapsody.” Some of the fact-based competitors are quite removed from the general template, such as the memoir-driven “Beautiful Boy” and “Boy Erased” or the watershed history presented in “The Front Runner” (politician Gary Hart). All eyes, meanwhile, are on Christian Bale in Adam McKay’s “Vice” (Dick Cheney), which is among the few contenders still to be revealed.

“It’s an apt note on which to begin this year’s proceedings: the art-house delicacy from a veteran, versus the box office smash from a movie-star-turned-director.”

Clint Eastwood is also crashing the field late in the game, as he did with “Million Dollar Baby” and “Letters From Iwo Jima,” directing and starring for the first time in a decade in “The Mule.” His latest will tell the true story of Leo Sharp, an 80-year-old WWII veteran who became a drug courier for the Sinaloa Cartel.

It’s difficult to stand at the beginning of the journey and determine with confidence where the path will lead. This time last year, “Three Billboards Outside Ebbing, Missouri” was the big hit out of the early festivals. Throughout the fall and winter, films like “Get Out” and “Lady Bird” presented strong cases. Ultimately the Oscar went to “The Shape of Water” — an outcome somehow deemed safe or traditional or even boring in some quarters.

Pause to consider that. A genre fable about a mute woman who develops a relationship with a godlike amphibian creature was considered an unexciting “safe” choice when the Oscars dust had settled. There can’t possibly be a more definitive illustration of how far the Academy’s needle has moved over the past few years.

So, perhaps in six months’ time it will still be “Roma” versus “A Star Is Born.” Perhaps one of the aforementioned players or another not yet on the radar will develop a narrative that’s undeniable. Much has been seen, but the season is still very new and the circuit has secrets yet to be revealed.

We’ll just have to keep watching to find out what they are.

Best Picture
“BlacKkKlansman”
“Black Panther”
“Can You Ever Forgive Me?”
“The Favourite”
“First Man”
“Green Book”
“If Beale Street Could Talk”
“Roma”
“A Star Is Born”
“Vice”

Best Actress
Glenn Close, “The Wife”
Olivia Colman, “The Favourite”
Felicity Jones, “On the Basis of Sex”
Lady Gaga, “A Star Is Born”
Melissa McCarthy, “Can You Ever Forgive Me?”