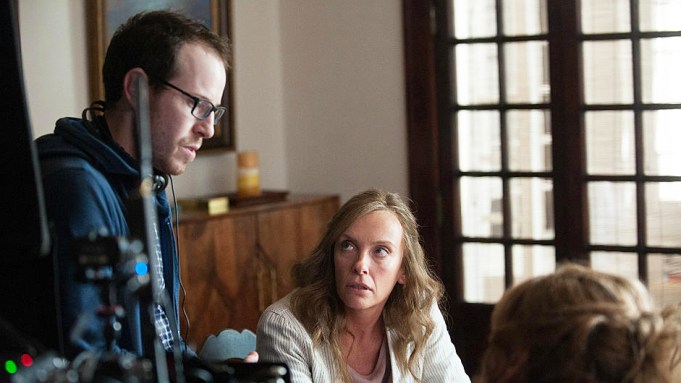 WARNING: Spoilers! Do not read this interview unless you have already seen “Hereditary.”

Heralded by some as the scariest movie ever made, Ari Aster’s “Hereditary” opened last weekend, taking in $13 million domestically on a reported budget of $10 million. It also sparked a lot of questions, ones that have been lingering since the film premiered at this year’s Sundance Film Festival. Aster opened up about some of the other burning questions viewers might have about what is sure to be one of the most-talked about films of the year.

The film centers on Annie (Toni Collette), a wife and mother who is burying her own mother Ellen at the start of the film. We learn their relationship was complicated; Ellen was a distant, cold woman with secrets. Annie’s own relationship with her children is troubled; her teenage son Peter hasn’t forgiven her for one night when she was sleepwalking and doused him in paint thinner and almost set him on fire. Younger sibling Charlie is a peculiar young girl who, in an early scene, decapitates a pigeon and makes it into an odd figurine.

The tragedies pile up: Charlie is brutally decapitated when riding in a car driven by her brother, furthering fracturing his relationship with his mother. Annie’s friend from a grief counseling group, Joan, (Ann Dowd) shows her how to connect with Charlie beyond the grave. Eventually, Annie and the audience learn that they are pawns in an ancient ritual to bring the demon Paimon into Peter’s body and Joan is part of a coven that Ellen was involved with.

While the film ends on a despondent note, with Peter’s body being possessed by Paimon, Aster says there’s another way to look at things. “Ultimately, the film is ultimately a success story from the grandmother’s point of view and the coven’s point of view,” he notes, admitting, “That’s a dark way to see it.”

You don’t have kids of your own but you’ve really tapped into every parents’ worst nightmare with this film.
Of course. I feel like I had my own avenues of insight into that. I’ll just have to remain cryptic on that. From very early on I was describing this as an existential horror film. It preys on the fears that don’t really have a remedy. What do you do with a fear of death? What do you do with the suspicion that you don’t really know the people you’re closest to? What do you do with fear of abandonment? The fear of somebody close to you changing? The film is really feeding on those fears.

People often look to filmmakers for biographical experiences in their films. Did you have any experience with the occult or a coven?
I did do research into witchcraft and the occult. It’s something I had no ties to and I found the research pretty disturbing, to be honest. But hopefully it does feel real. I’m not a particularly superstitious person but what scares me is what people are capable of. The idea of witches has always scared me because of the idea that there are Machiavellian forces out there that conspire to hurt others. There are people who do not have your best interest at heart and are actively willing to do harm to you and actively sending energy in that direction.

And the fact the family is completely unaware adds to the terror.
One way that I pitched the film when I was first taking it out was “it’s a story about a long-lived possession ritual told from the perspective of the sacrificial lamb.” Ultimately we are with the family in their ignorance of what’s really happening. But I also wanted to imbue the film with this sinister, more knowing perspective. Even though we are with the family in their ignorance, the movie itself knows exactly where the story is going. And everything is inevitable. Throughout the film, things are just sort of clicking into place and all those things are driving this family towards one end.

In an early scene, the subject of free will is discussed. Are you saying this family has no free will?
Yeah, absolutely. I see the film as being very Greek in that sense. This is absolutely inevitable, the family has absolutely no agency.

There is nothing Annie can do to stop this from happening?
No, I don’t think so. That’s where the dollhouses came in. Annie creates these miniature figures and dollhouses and they served as a perfect metaphor for the situation; they’re dolls in a dollhouse being manipulated by outside forces. Any control they try to seize is hopeless.

Is that why she thinks she can stop it by burning the Charlie’s sketchbook – the first time she tries, she catches fire — but the second time, her husband Steve catches fire?
Exactly. Even that scene is meant to play as Annie’s big redemptive moment, she’s going to sacrifice herself for her son. It’s a beautiful gesture but part of the cruel logic of the film is it’s an empty gesture. Ultimately, it’s not her choice to make. She thinks there’s a design here and she can end things if she sacrifices herself. But there’s no design and there are no rules. There is a malicious logic at play.

Could it have been prevented if she hadn’t been tricked into casting the spell given to her by Joan?
The thing is, that scene is ultimately a red herring, and it’s a piece of misdirection. It plays as a séance scene but really it’s a much darker conjuring and they need Annie to take part in it in order to bring it in the house and in order to further this ritual along. When she invites it in, she escalates things. But it would’ve happened anyway, we’re just seeing how it happened. We’re seeing one of the ways it could play out.

There’s a lot of talk about what a bad mother Annie’s mother was. Did she just have kids for the purpose of this ritual?
That’s pretty much what is suggested. If you listen to Annie’s speech at the group therapy, there are a lot of keys in her monologue as to what came before this and how far back this goes.

Early on, Charlie cuts the head off a pigeon and makes a strange figurine out of it. Can you elaborate on that?
I don’t want to be too obvious but we find later that Charlie has been building these figurines to populate a diorama she’s been building that serves as a shrine to Paimon. It also functions as a metaphor for what Paimon is doing to this family. If you look at the diorama you’ll see they’re headless figurines bowing to a pigeon-headed creature with a crown on its head, which is not far away from what we’re left with in the last scene of the film.

Annie talks about how her mother got “her hooks” into Charlie at an early age. Are we meant to think Charlie is in on it?
Charlie is the first successful host for Paimon. It’s transferred from Charlie to Peter at the end.

In an odd way, that makes me feel better.
(Laughs) That’s nice. See, it’s a happy ending. But obviously, there’s a boy who’s horribly displaced by the end.