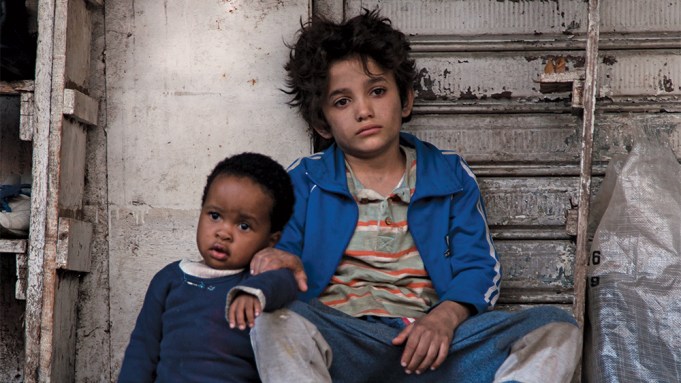 Nadine Labaki made “Capernaum,” her arresting new drama about a young boy who sues his parents for giving birth to him, after observing the soul-crushing poverty around her in Beirut. She wondered what happened to the children she saw begging on the streets or working dead end jobs as delivery boys or assistants in mechanic shops. Many, she suspected, were refugees, fleeing various conflicts across the Middle East, often without any kind of documentation.

“We ignore them,” Labaki told Variety. “We act like they’re nonexistent when they’re here because of our wars and our conflicts and the stupid decisions of failing governments. I needed to understand what happens when one of these boys I saw on the streets disappears around the corner.”

So Labaki spent months researching the situation, speaking to families who were struggling to find food and shelter, and people faced with impossible choices. At the end of her interviews with children, she would ask if they were happy to be alive. Their answer was shattering.

“They’d say they wished they were dead,” remembers Labaki. “They didn’t know why they were born if they were only here to be raped, beaten, abused, tortured. Nobody said a nice word to them. These kids are angry to the point of being numb.”

The result of Labaki’s investigation, “Capernaum,” won the Jury Prize at this year’s Cannes Film Festival, has been selected by Lebanon as its candidate for the upcoming foreign-language Oscar race. It earned raves when it premiered at the French film festival, with Variety’s Jay Weissberg writing that “while this is unquestionably an issue film, it tackles its subject with intelligence and heart.”

Sony Pictures Classics nabbed North American rights to the film out of Cannes and will release it in the U.S. on December 14. The indie label is exclusively premiering the new trailer with Variety.

Many reviews praised Labaki for her realist style. It was an effect she achieved by casting non-professional actors. Zain Al Rafeea, the arresting teenage star of the picture, had never appeared in a movie before. A Syrian refugee, he lacked papers or much in the way of schooling, and lived with his family in poverty.

“He’d never slept in a bed,” said Labaki. “He always slept on the floor in one big room. He grew up in the streets and the only thing he knew was violence.”

Since the film was released, Al Rafeea and his family have been resettled in Norway and placed in a house near the sea. The boy has been attending school for two months. Labaki says it’s like a fairy tale, but that’s not the ending many of the children living in these circumstances face.

“Capernaum” is already a favorite to land a nomination for the best foreign language Oscar. The hope is that the awards attention will resonate in Lebanon, where Labaki is working with organizations such as UNICEF to host screenings for government officials and juvenile judges.

“I might be too ambitious or too naive to that think that we can change everything,” said Labaki. “But I want this film to open a debate about these problems and make people more aware of it. Maybe that will be the beginning of something.”