Why China Is Keeping ‘Crazy Rich Asians’ on Hold 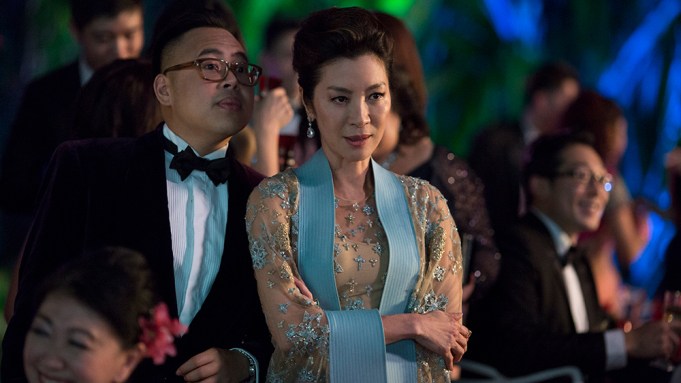 “Crazy Rich Asians” got a theatrical release in India last week, after a “no” then “yes” decision by Warner Bros. But the surprise hit film is still without a release slot in the world’s most populous nation, India’s northern neighbor, China.

In China, the decision is not in the hands of its studio backer, Warner Bros. Rather it is up to the government’s industry regulators at the Film Bureau, and state-owned monopoly importer China Film.

The film was submitted by Warner’s China liaison office for censorship approval months ago, prior to its release in North America. With one eye possibly on a Middle Kingdom release, the film makers were careful not to include most bits of the underlying Kevin Kwan novel that could be interpreted as a slur on China.

The chances of “Crazy Rich Asians” obtaining a quota import slot and revenue-sharing release should have improved when it enjoyed three weeks as the number one film in North America. It has accumulated $170 million, with a further $57 million in international territories.

But clarity has not been forthcoming. Contacted on multiple occasions by Variety, Warner Bros. has said that it simply has no answer. And the longer the wait continues, the worse the prospects for the film’s import approval now become.

In addition to the customary argument that China has no need to import foreign movies in order to show films with ethnically Asian people, there are at least three other factors affecting the decision.

One argument that is both ongoing and currently topical is that “Crazy Rich Asians” sends out the wrong message. The current leadership in China is waging war on corruption and greed. More than a million civil servants, party officials and military officers have been punished for corruption in the past some five years. Greed and the most conspicuous displays of wealth are once again societal no-nos.

In that period, the entertainment industry has been repeatedly reminded to set a better example, with caps on salaries, repeated emphasis on core socialist values, and punishment for entertainers who display poor behavior. It has often been ignored. And so the Fan Bingbing debacle is not only one of the highest profile scandals, it is also a potent moral reminder about the perils of wealth and high flying that is diametrically opposite to the message of “Crazy Rich Asians.”

A second problem is the trade dispute with Donald Trump, which has gone beyond a war of words. It is having an impact on the growth rate of the Chinese economy, and has plunged U.S.-Chinese political relations to new lows. In that context, few favors are likely to be done to U.S. businesses. China’s retaliatory measures cover a wide array of non-tariff measures, and certainly include the slowing down of bureaucratic procedures for U.S. companies operating in China.

And, third, the entertainment and media sectors have already seen top-down slowdown following the shift earlier this year of the industry regulator SAPPRFT to direct control by the Communist Party’s Propaganda Department. The approvals slowdown is not a specifically anti-U.S. problem. Many Chinese firms are similarly feeling the effects of deceleration and bureaucratic opacity.

“Nothing is moving at all. We are simply not getting answers,” one Chinese distributor told Variety in confidence. “We’ve seen some films get approval with only two weeks notice.”

That suggests that, even if “Crazy Rich Asians” were now to get its China outing, the release date may be less than optimal, and its marketing may be subdued.