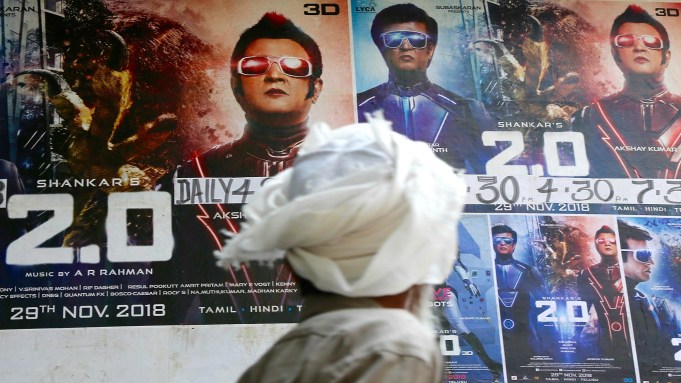 “2.0” is understood to be the first Rajinikanth-starring film released in China in recent times. Indian films have made impressive inroads at the Chinese box office in the past couple of years, led by Aamir Khan-starring titles “Dangal” and “Secret Superstar,” which grossed $193 million and $118 million respectively. Amitabh Bachchan-starring “102 Not Out” was released in the past week and has earned $4.09 million in its first six days in China.

Rajinikanth (“Sivaji,” “Ra.One”) plays four distinct roles in “2.0” and is pitched against Bollywood star Akshay Kumar as the antagonist. Directed by Shankar Shanmugam, the film is a sequel to Shanmugam and Rajinikanth’s 2010 hit “Enthiran,” which grossed $50 million worldwide.

With a budget of $76 million, “2.0” is India’s most expensively produced film of all time. It was produced by Lyca Productions, an offshoot of mobile telephony company Lyca Mobile.

The film was released globally on Nov. 29 in Tamil, Telugu and Hindi language versions. It has grossed $70 million to date, according to industry estimates.

HY Media announced the deal via a message on YouTube. It says it is now submitting “2.0” to Chinese censors, with a view to releasing the film in China in May or June, 2019.

HY Media has offices in Beijing, Shanghai, Hong Kong and Los Angeles. The company deals regularly with the Hollywood majors. “PadMan” also starring Kumar, produced by SPE Film India, will be released by HY Media in China on Dec. 14.

“We are honored and very excited to have the opportunity to bring film “2.0”, which represents the highest level of Indian film-making, to the Chinese audience,” VP Sophia Xiao Yingying said in a prepared statement. “We believe “2.0” is only the beginning, and we look forward to building long-term collaboration strategies with Lyca Productions.”

Lyca has other recent credits that include Mani Ratnam’s “Chekka Chivantha Vaanam” and Vetrimaaran’s “Vada Chennai.” The company is also on board “Indian 2,” a sequel to Shanmugam’s 1996 blockbuster “Indian,” which starred Kamal Haasan.