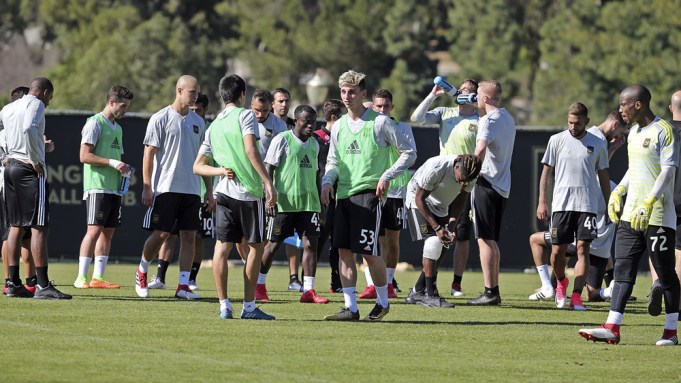 YouTube TV has secured exclusive rights to games with a new Major League Soccer team in Los Angeles, marking the first time a streaming service of any kind has made such a deal with a U.S. pro sports team instead of a TV alternative.

As part of the innovative arrangement, YouTube TV will also nab naming rights on jerseys for the team, known as Los Angeles Football Club, which joins MLS in March. The team’s owners include media mogul Peter Guber, Magic Johnson and Will Ferrell.

“When we talk about innovation, it goes beyond a traditional distribution deal and really looking at programming for LAFC fans both on and off the field,” said Angela Courtin, global head of marketing at YouTube TV and YouTube Originals. “We think it’s going to be groundbreaking.”

Approximately 18 LAFC games will be exclusive to their own YouTube TV channel, which will be restricted to its subscribers in the Los Angeles market. YouTube TV subs will not have to pay an additional fee for access to the games beyond the $35 per month they already spend on the base package.

While all LAFC games for the upcoming season will be available live on YouTube TV, about half of them are nationally televised games, the rights to which have been purchased by ESPN or Fox Sports 1. Both of those channels are already carried by YouTube TV.

Financial terms of the multi-year deal were not disclosed. LAFC will play in a newly built 22,000-seat arena, Banc of California Stadium, in downtown Los Angeles.

Though soccer isn’t quite on par with its pro counterparts in much more popular U.S. sports like baseball, football and basketball, it could very well be a sign of things to come. The prospect of teams foregoing the usual local partners like affiliate stations or regional sports networks in favor of some variation on streaming services — whether an ad-supported home like Sony’s Crackle, a subscriber VOD service like Netflix or a so-called skinny bundle like YouTube TV — has been bandied about the sports world for years.

The likes of basketball-team owners including Steve Ballmer (Los Angeles Clippers), Paul Allen (Portland Trailblazers) and Ted Leonsis (Washington Wizards) have discussed exploring holding onto their own TV rights and self-distributing over the Internet,  but no pro sports team has done so yet considering how rich a revenue stream existing RSN or local affiliate deals can be.

The Google-owned streaming service isn’t producing the games itself, but partnering with MLS and LAFC to handle not only play-by-play coverage, but regular pre- and post-game shows. Other LAFC-related content will likely also be made available on demand.

“We have a partner in YouTube TV that is willing to do innovative things in the way of doing augmented content,” said Tom Penn, president and co-owner of LAFC. “They are pushing the envelope all the time in the ways content is delivered to fans.”

Since launching last year, YouTube TV has amassed a bouquet of about 50 TV networks including broadcasters like ABC and cable networks like FX. The venture is one of a bumper crop of virtual MVPDs attempting to attract budget-conscious subscribers away from traditional expensive packages with a lower cost and fewer channels. Rival services to YouTube TV include a new offshoot of streaming service Hulu; AT&T’s DirecTV Now and Sony’s Playstation Vue.

While a major-market MLS team is far from the most valuable set of rights on the market, the YouTube TV coup comes as the competition for these game packages is escalating between traditional media companies and tech giants who have taken an increasing interest in bidding them away because of their value to advertisers and audiences. Earlier today, Fox announced a five-year deal to take TV rights to NFL “Thursday Night Football”; digital rights will be bid on separately.

YouTube TV knows from innovative marketing arrangements. Under a multi-pronged deal with Major League Baseball, YouTube TV  served as the presenting sponsor of the 2017 World Series with a variety of national TV spots and on-air callouts on Fox during each game. The deal also includes YouTube TV branding across MLB’s digital properties and social-media accounts, as well as in-stadium promotion.

MLS has national U.S. TV deals through the end of 2022 with ESPN, Fox and Univision; but it also has had discussions with Amazon, YouTube, Twitter and Facebook about distribution deals, says Seth Bacon, MLS’s senior VP of media.

And like bigger leagues, MLS has been experimenting with digital streaming. Last year it distributed 22 games on Facebook in partnership with Univision Deportes. It also offers MLS Live, priced at $79.99 per season with more than 250 out-of-market games (a service powered by BAMTech Media).

“It’s creating this whole other avenue of competition and opportunity for the clubs to have those discussions. It’s positive for the industry, and the leagues – and ultimately positive for the fans,” Bacon says.