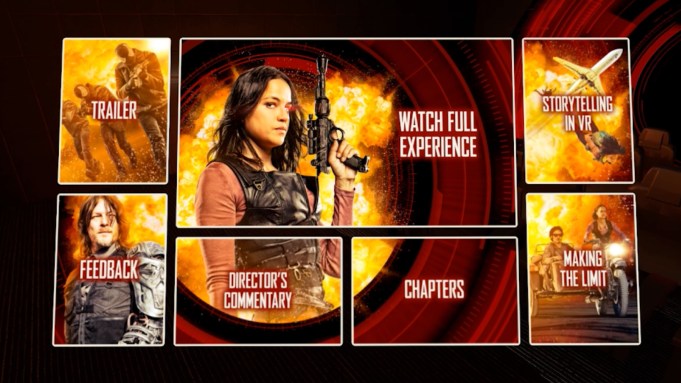 Will Hollywood star power get consumers to open their wallets for virtual reality (VR)? We may soon find out, thanks to “The Limit,” a new VR featurette from filmmaker Robert Rodriguez that was released for major VR headsets Tuesday.

Starring Michelle Rodriguez and featuring “The Walking Dead” star Norman Reedus, “The Limit” is a 20-minute VR film that puts the viewer at the center of an action-packed story involving bionics, secret agencies and a face-off against the forces of evil that involves first fights, a car chase and a last-second escape from a plane that may or may not include functioning parachutes.

The film is available for mobile headsets including Google Daydream, Samsung Gear VR and Oculus Go as well as HTC Vive and Oculus Rift. It is also being released for Android phones with cardboard viewers, and versions for iOS, PlayStation VR and Windows Mixed Reality are supposed to come soon.

At launch, the film is being sold half off, or for $5 on most platforms, while the cardboard version costs $4. In the future, the price is supposed to get raised to $10 and $8, respectively. This gives viewers access to an immersive 3-D version as well as a 2-D cut with higher resolution, directors commentary and some behind-the-scenes footage.

The film is being released by STXSurreal, the immersive entertainment subsidiary of STX Entertainment. STX ventured into VR when it acquired Los Angeles-based VR startup Surreal in August of 2016. The VR division is now being led by Surreal’s co-founders Rick Rey and Andy Vick, who both previously worked as execs for Disney’s Maker Studios.

“The launch of ‘The Limit’ is a watershed moment in VR, and gives fans of premium scripted entertainment a compelling reason put their headsets back on,” said Vick and Rey in a statement. “In keeping with STX’s talent-driven model, we enlisted Robert, Michelle and Norman, who collectively have millions of passionate fans across the globe, to break new ground and bring this category-busting cinematic VR film to life.”