How ‘Ready Player One’ Compares to Today’s VR Technology

The movie's far-out tech is closer than you think

Steven Spielberg’s “Ready Player One,” which premieres this Thursday, transports viewers into the year 2045, and a world where everyone does everything in virtual reality (VR). That’s been a big draw for VR enthusiast, who hope that the movie will finally help their medium of choice go mainstream.

This begs the question: How much does the reality of VR match what “Ready Player One” promises? A closer look at the film reveals that you won’t quite be able to do what its hero Wade Watts does yet — it is science fiction, after all. However, the far-out technology of the movie is actually closer than you may think.

Here’s a spoiler-free look at some of the key technology shown in the movie, and how it compares to VR today:

Wade’s wireless VR headset. “Ready Player One” doesn’t waste a whole lot of time explaining how gadgets used in the film work, but Wade’s headset, which is also used by most other characters, essentially looks like a pair of fancy ski goggles. Light, wireless, and apparently working without any external hardware, it is capable of transporting you to the virtual world of the Oasis where ever you are.

Current-generation VR headsets can’t quite match that form factor, but we are getting closer. Granted, high-end headsets like the HTC Vive and Oculus Rift still require an external computer to run VR experiences, and more affordable solutions like Samsung’s Gear VR are based on a user’s phone.

Wade’s VR headset: Not that different from where the industry is heading.

However, there’s a clear trend towards wireless all-in-one headsets. Oculus is getting ready to release its Oculus Go mobile all-in-one at Facebook’s f8 conference next month, Google and Lenovo will soon start selling a Daydream standalone headset, and Oculus is expected to sell a high-end all-in-one, currently dubbed “Santa Cruz,” next year.

The latter will also offer what’s being called inside-out tracking, meaning that it will realistically relay body movements in VR without the need for any external hardware. That’s similar to the headset in “Ready Player One.” However, Spielberg’s version goes even further, and keeps track of obstacles in the real world, allowing users to break into mock VR fights while running around on a real-life sidewalk. That kind of awareness of one’s environment is still a bit further out, but AR apps on phones already hint at what’s possible.

Tactile gloves and bodysuits. VR users in “Ready Player One” wear special gloves to interact with virtual screens and “feel” virtual objects. Anyone with some extra cash can get their hands on body suits capable of relaying additional sensory feedback , ranging from punches to at times more pleasant sensations.

VR startups like uSens have already built workable finger tracking solutions, even without the need for gloves. Tactile feedback is a lot harder, but not impossible. VR startup HaptX built a prototype of a tactile glove that lets you actually feel VR objects, thanks to integrating hundreds of air pockets that get compressed and decompressed in real-time via special software.

The result is remarkably realistic: In a recent demo given to Variety, HaptX showed off flowers that one could touch one by one. At one point one of the flower petals fell off, and the glove could accurately reproduce the sensation of something slowly gliding over your hand.

The downside is that the glove still looks like part of an experimental exoskeleton, with pipes and clamps all over. What’s more, it is being powered by a box the size of a full PC that’s being used to control the air flow. However, HaptX executives were convinced that they could eventually shrink down all of this to a much more portable, and consumer-friendly, size. They also want to ultimately offer the same as part of a full-body experience, but that may be even further out.

VR communities. Much of “Ready Player One” is set in the Oasis, a massive online universe where people go to play all kinds of games, hang out and compete in a giant quest. It’s probably the least futuristic part of the movie, as online worlds like Second Life have been around for years. More recently, we’ve seen a number such worlds and experiences find their way to VR as well, from Second Life successor Sansar to Microsoft’s AltspaceVR. 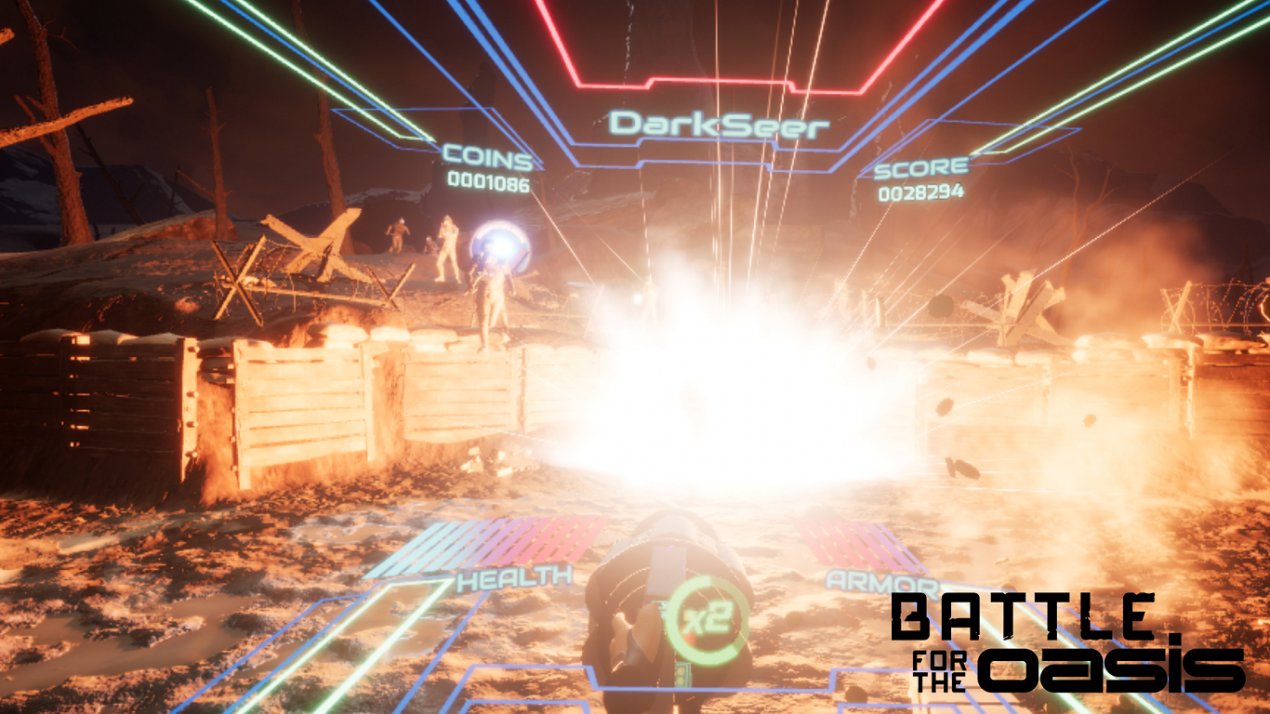 HTC Vive users can experience parts of the Oasis as social VR games.

In fact, the social aspect of these worlds is so close to what “Ready Player One” depicts that a number of companies have built direct tie-ins with the movie. Sansar is bringing Aech’s Garage, a key hangout for the heroes of the movie, to life in its VR world. Viveport is offering its own version of the Oasis, featuring a few multiplayer games, for users of the HTC Vive. And Roblox, a Minecraft-like PC and mobile game, even recreated the quest to find the three Oasis keys, within its world.

Believable immersion. Those 2018 VR worlds may not look quite as real as the 2045 version of the Oasis depicted in the movie, in part because of the shortcomings of the displays used for today’s VR headsets. Look closely, and you’ll still see the pixels.

In “Ready Player One” the VR world is virtually indistinguishable from reality, as we learn when one key character gets tricked into thinking that he ended his VR session while actually still being in a simulation. That level of immersion seems unbelievable — until you realize that even today’s VR can trick your brain quite effectively.

Location-based VR experiences often make use of external stimuli to help you with the willful suspension of disbelief. Walk through a computer-generated world, and you’ll be acutely aware that it is essentially just a video game. Combine the same graphics with a real, wobbly wooden plank under your feet, and you may actually get weak knees. 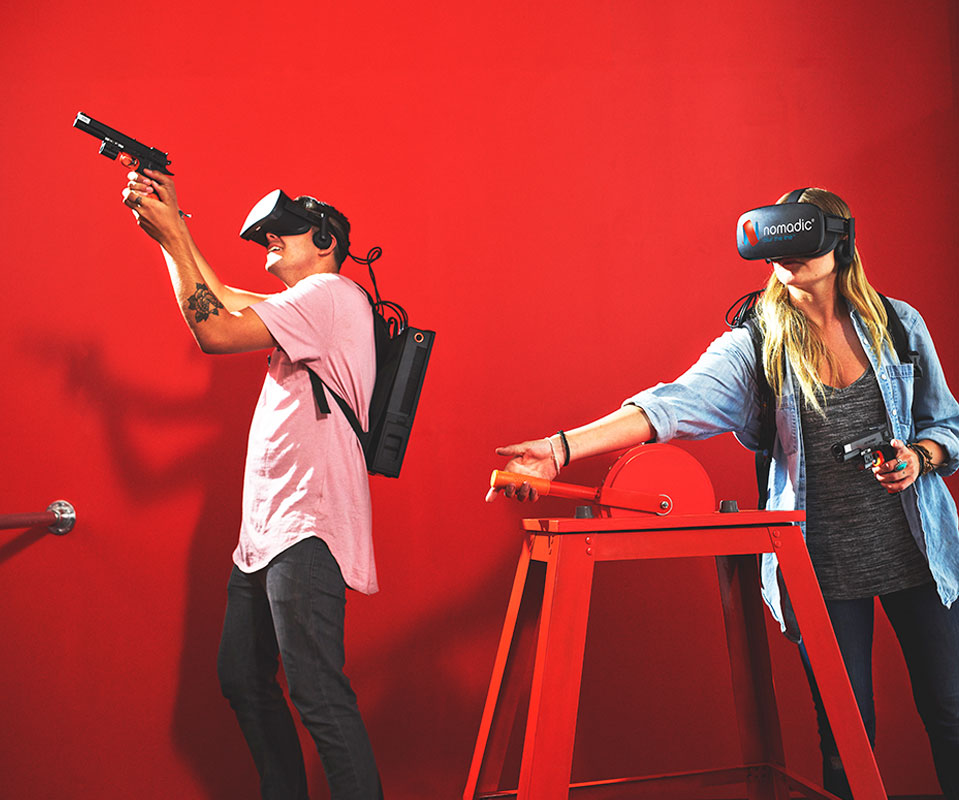 Virtual reality already feels very much like the real thing once  you add a few physical cues. (Image courtesy of Nomadic)

The same is true for good content, which quickly makes you forget about the shortcomings of today’s displays. Play a game like Job Simulator for an extended period of time, and you might just find yourself trying to lean on a counter that isn’t really there.

Keeping check of Wade’s emotions. In one scene of the movie, Wade has to turn on special emotion-surpression software to make sure that his avatar stays cool, and doesn’t reveal that he is actually having a panic attack in the real world.

The good news is that no one in VR will see you freak out. That’s because today’s VR is terrible at capturing your emotional state. “Ready Player One” uses special hardware to scan people’s faces and relay their every smile or frown to the virtual world.

In reality, motion capture is still a complicated process that often requires the use of special markers, much like the ones that have long been used for digital animation. Today’s virtual worlds instead ask users to press buttons on their controllers to change their facial expressions, which isn’t very natural at all. There have been some attempts to bring simple facial motion capture, as well as eye tracking, to VR headsets, but it will likely be a few more years before any of this technology actually makes it into consumer products.

Until then, we’ll just all have to use Wade Watts’ poker face.