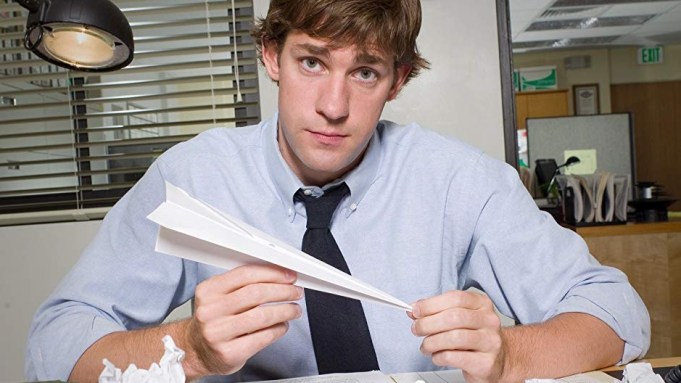 Is Netflix moving fast enough to bulk up on originals to offset programming that’s about to get pulled by studios like Disney, Fox and WarnerMedia?

Original content accounted for 37% of Netflix’s U.S. streams in October 2018, up from 24% a year earlier (and just 14% in January 2017), per video-measurement firm 7Park Data. But that means the majority (63%) of Netflix’s viewing is still from licensed content.

For November, NBC’s “The Office” was the most-viewed TV show on Netflix, followed by original series “The Chilling Adventures of Sabrina,” starring Kiernan Shipka.

Warner Bros.-owned “Friends” stood at No. 3 — with its ongoing popularity helping to explain why Netflix was motivated to ink a one-year renewal for the ’90s-era sitcom, in a deal reportedly worth $100 million.

While Netflix has made strides in boosting viewing of originals, it’s set to lose a bunch of licensed TV series and other content in the next year or two.

Netflix’s pay-TV-window output deal with Disney is ending, beginning with 2019 releases. In the U.S., Mouse House content has consistently accounted for 8%-12% of Netflix viewership (over 2017 and through October 2018), according to 7Park.

Disney is launching its own Netflix-style subscription VOD service next year — dubbed Disney+ — so Netflix will be losing Disney-owned content starting next year. Disney is acquiring 20th Century Fox, so expect more of Fox’s content to leave Netflix, as well. AT&T’s WarnerMedia had pegged Q4 2019 for its own broad-focused SVOD entry, so it’s also going to be pulling back its own stuff from Netflix.

The shift is already underway. Fox TV series have lost the greatest share of Netflix viewership in the past year, 7Park’s analysis found. Fox studio content accounted for 24% of viewership in January 2017 and 15% in October 2017, but only made up 4% of October 2018 US viewership. That’s primarily because several 20th Century Fox shows rolled off Netflix. Those include “Family Guy,” “How I Met Your Mother” and “It’s Always Sunny in Philadelphia” — which are now streaming on Hulu (and in which Disney will obtain a 60% controlling interest once it absorbs Fox).

Then there’s Netflix’s dissolving partnership with Disney-owned Marvel Entertainment for the collection of “street hero” originals. In aggregate, Marvel series on Netflix have accounted for an average of 1.7% of total U.S. viewership over the past 12 months, per 7Park. Of the Marvel series, “Daredevil” has been most popular.

But it appears the Marvel shows, produced by Marvel Television and ABC Studios, are winding down on Netflix. On Nov. 29, Netflix announced that “Daredevil” would not be returning after three seasons. That came after “Iron Fist” and “Luke Cage” were axed in October.

Meanwhile, according to 7Park’s analysis, Netflix has had mixed results with content deals it has struck with creators of popular licensed series — although it’s still early on this front, as Netflix shows from big names like Shonda Rhimes and Ryan Murphy have yet to come out.

For example: Netflix’s deal with “The Simpsons” creator Matt Groening for original adult-animation series “Disenchanted.” According to 7Park, Groening’s “Futurama” accounted for as much as 2% of total Netflix monthly viewership in 2017 before it rolled off Netflix at the end of last year. So Netflix clearly had high hopes for “Disenchanted”: The show was the No. 6 most-viewed series in the U.S. during its premiere month (August 2018), just behind “Grey’s Anatomy.” But by October, “Disenchanted” had dropped out of the top 50 most-viewed shows.

To be sure, there are several caveats about 7Park’s methodology and data, which don’t show a complete picture of Netflix usage. But Netflix doesn’t release detailed viewing metrics, so third-party measurements provide the only approximation of how subscribers are using the service.

For starters, 7Park measures only Netflix desktop viewing — excluding mobile and connected-TV platforms. The anonymized data in the report is based on an opt-in passive-tracking panel of 600,000 U.S. users (aggregated from partners, which 7Park does not disclose, including vendors of web-browser security plugins). Also note that the 7Park data analyzed covers only the U.S. (while the company says it also tracks consumer behavior worldwide), whereas Netflix often makes content-buying decisions for a worldwide user base. Nielsen’s competing panel-based SVOD Content Ratings tracks only connected-TV viewing, using uses audio-fingerprinting technology to track titles watched.

The upshot from 7Park’s data analysis is that Netflix still relies on studio partners for a large chunk of its streaming hours. The next year will mark a new test of Netflix’s ability to replace content that is rolling off with other engaging programming.

New York-based 7Park Data, founded in 2012, is backed by investors including Mueller Ventures. The company sells data-tracking services for Netflix, Hulu and Amazon VOD viewing, as well as other analytics products. The company recently introduced “OTT Stream to Shop,” which tracks and analyzes Amazon.com purchasing behaviors of U.S. consumers after they watch TV and movie titles on Netflix, Hulu and Amazon.