My 180-Degree Vacation: A Review of the Lenovo Mirage VR180 Camera

I’m sweating, dizzy, and nauseous, and my phone is warning me that it is overheating. What a way to relive my vacation.

Lenovo recently sent me a review unit of its new Mirage camera, which takes 180-degree 3D photos and videos. I decided to bring the camera along to my family’s recent trip to Europe to put it to the test and figure out how well it works as an everyday point-and-shoot.

Before I explain why the results made me feel queasy, a few basic facts about the device: Lenovo first announced the Mirage camera alongside its standalone VR headset at CES earlier this year. The Mirage is one of the first cameras to support Google’s VR180 format, which is meant as a kind of hybrid video format for both virtual reality and 2D viewing: 180VR videos that are uploaded to YouTube play on phones and desktop computers just like regular videos, without the cumbersome panning that’s necessary to watch 360-degree video recordings.

But viewed with a VR headset, the videos offer the ability to explore scenes in full 180 degrees, and in glorious 3D. Photos taken with a VR180 camera can also be viewed in 3D with a headset, browsed in 180-degrees on your phone, or exported into a square shot that looks a bit like an Instagram photo taken with a fisheye lens. 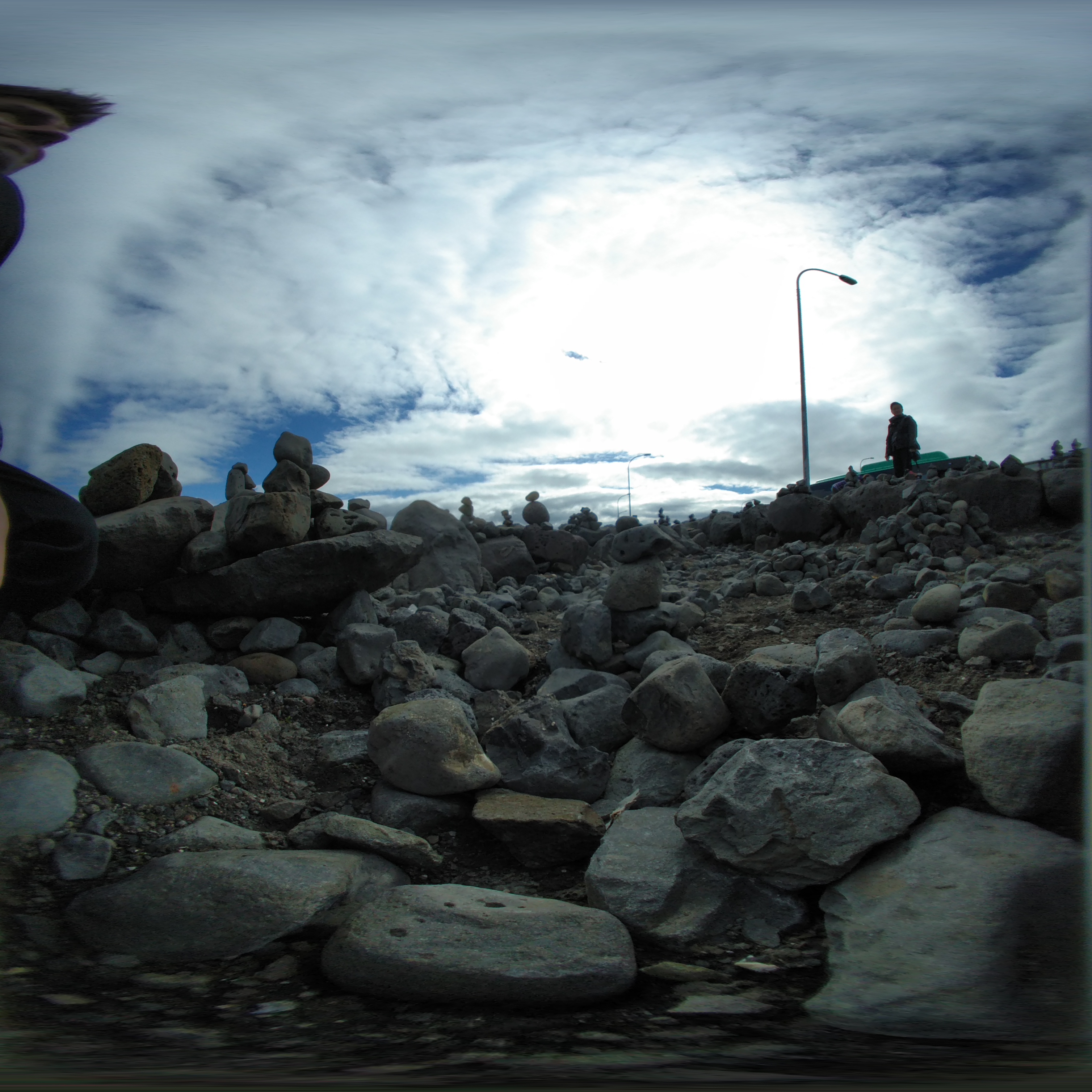 One of the Mirage’s photos, displayed in non-VR mode.

The Mirage camera sells for $300, and is equipped with two lenses on the front, and a plain back without any display or viewfinder. A Lenovo spokesperson told me earlier this year that the company didn’t include the ability to view your footage in real-time for two reasons: First, with a 180-degree field-of-capture, everything in front of the camera is by definition in frame. And second, adding a display would have made the camera significantly more expensive.

In practice, this means that the Mirage camera works a bit like a oldschool film camera. On my vacation, I took lots of snapshots and short video clips without knowing how the results would look like until much later. Photos can be downloaded over Wifi to your phone, where they are being imported into Google’s VR180 app. In theory, you can also use your phone as a real-time viewfinder — but really, who wants to juggle two devices at the same time while taking vacation pictures?

And while not having any display or viewfinder feels awkward at first, it’s something that you can get used to fairly quickly. The same can unfortunately not be said for the camera’s other status indicators. Lenovo opted on an all-white design for the Mirage camera, and someone decided that this color scheme would look good with light blue and light green led lights to indicate the mode the camera is set to, as well as whether it is currently recording.

That choice looks great indoors, giving the whole device a subdued. almost etherial design. But outdoors, and especially in direct sunlight, it’s close to impossible to see which light is glowing in which color. This forced me to frequently raise the camera to my ear to listen for the barely audible sound it makes when you start to record something, resulting in countless weird clips of my chin and ears in 3D. It’s really hard to fathom how Lenovo didn’t catch this flaw before shipping the device.

All over my camera roll: Videos of my chin and ears, as I’m trying to figure out whether the camera is recording or not.

Offloading images and videos to the Google 180VR phone app can take some time, and the camera occasionally disconnected, making it a bit of a prolonged endeavor. But ultimately, the app provides a great first look at the footage, complete with the option to export it to YouTube, Google Photos and other apps. There’s also a magic-window option that essentially pins the 180-degree scene, allowing you to pan back and forth by moving your phone left and right, which actually makes for a fun viewing experience.

But the real test for a VR camera is to put on your headset — and that’s when things went sideways. The photos taken with the Mirage actually looked great, especially when I had captured people in closer proximity, as the 3D effect really made if feel like I was there again.

The videos were another story. Turns out that VR videos, even in 180 degrees, are really, really hard to get right. Tempted by the small size of the Mirage, I had often treated it like a point-and-shoot camera, and recorded quick and short clips everywhere, sometimes even while walking around. Wearing a headset, most of these clips were dizzying and uncomfortable. What’s more, the 3D effect was often barely noticeable, especially when filming anything further away.

One of the 180VR videos recorded with the Mirage camera: Parisians celebrating their country’s World Cup win.

And then there was the issue of the blind spots. The Mirage camera records video with 180 degrees, which basically means that it captures everything in front of and next to you, but not anything behind you. In the final video, that blind spot is blurred out and grey or black, depending on the app you view it with. That takes a bit of getting used to, but you can make peace with it over time.

Unless you watch the videos with Google Photos, which is the default photo and video viewing app on Google’s Daydream VR platform. That’s because Google Photos automatically shifts the video to be centered again whenever you look too far left or right, which inevitably leads to the clip jumping back and forth in front of your eyes until your stomach churns. Once during my test, Google Photo’s repeated jumpiness also caused my phone to overheat, leading to the repeated display of warning messages.

Another video taken with the Lenovo Mirage camera.

Granted, that’s not Lenovo’s fault. But for me, these playback issues, as well as the challenges to actually capture footage that was enjoyable to watch, raised questions about VR180 as a consumer format. I’m sure VR180 is a great addition for YouTubers who play to the camera and now have one more tool to record engaging and immersive videos. But the Mirage camera, and VR180, just didn’t seem the right solution to capture my vacation videos.

I do wish my phone would offer an option to record 3D photos similar to those taken by the Mirage camera, but I don’t think I need the same for video clips — and I definitely don’t need a camera that doesn’t even have a noticeable red light to tell me when it is recording.