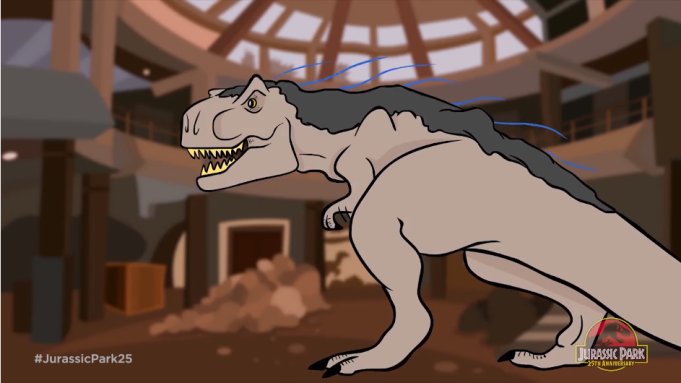 Hold on to your butts! Universal Pictures has released a retelling of Steven Spielberg’s original 1993 “Jurassic Park” — created entirely from videos submitted by fans of the dino-pic.

The “Jurassic Park” fan-made film isn’t a shot-for-shot remake; it’s a 17-minute abridged version that includes iconic scenes from the original movie. Universal released the short film Thursday on YouTube, which comprises a mélange of live-action and animation (and plenty of homegrown dinosaur props).

For Universal, the marketing stunt serves twin purposes: The studio is promoting the film’s 25th anniversary as well as the upcoming release of the latest installment in the franchise, “Jurassic World: Fallen Kingdom,” starring Chris Pratt and Bryce Dallas Howard, is set to hit in theaters across the U.S. and Canada on June 22, 2018.

The user-generated “Jurassic Park” campaign was developed by Universal Brand Development in partnership with Tongal, a crowdsourced digital studio.

In January, Universal launched a campaign with a video of Pratt and Howard asking fans to recreate their favorite scenes from “Jurassic Park.” After receiving hundreds of video submissions from 29 countries, Tongal and Universal stitched together the best ones to recreate the original film. The studio also has been releasing individual submissions on the Jurassic World social-media channels and website.

Watch the full fan recreation of “Jurassic Park” above or at this link.