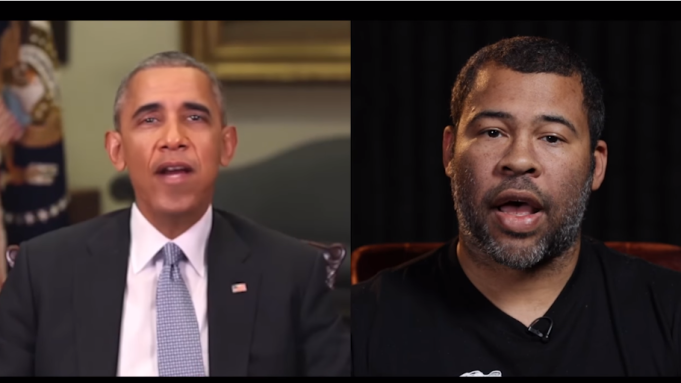 Don’t believe everything you see and hear in an internet video.

That’s the message from Jordan Peele and BuzzFeed, who teamed up for a public-service video announcement that puts Peele’s words into the mouth of former President Barack Obama.

The 72-second segment begins as what appears to be a message from Obama. Halfway through, it is revealed to be Peele — delivering his famous Obama impression as a voiceover to a digitally manipulated video.

“We’re entering an era in which our enemies can make it look like anyone is saying anything at any point in time, even if they would never say those things,” Peele-as-Obama says. For example: “Ben Carson is in the Sunken Place” or “President Trump is total and complete dipshit.”

“Stay woke, bitches,” Peele says at the end of the video.

The project emerged from discussions between Peele, who this year won the original screenplay Oscar for “Get Out,” and BuzzFeed founder and CEO Jonah Peretti about fake news, and the importance of media literacy as technology makes it incredibly easy to disseminate misinformation by manipulating video and audio.

As a courtesy, prior to releasing the video BuzzFeed shared it with aides who work with President Obama.

BuzzFeed’s Sosa figured out a way to get a semi-accurate camera track on Obama’s head to get a virtual 3D camera. That allowed him to paste Peele’s mouth onto Obama’s.

Sosa then used Fakeapp to replace Peele’s mouth with Obama’s; he had Fakeapp run for 12 hours and the synchronization improved dramatically, with the software correcting some of the points where Peele’s mouth weren’t in the right position. He then exported that footage to refine the synthetic jaw and then let Fakeapp run for another 48 hours to get a more accurate rendering of Obama’s mouth.

Watch the video above, or at this link.