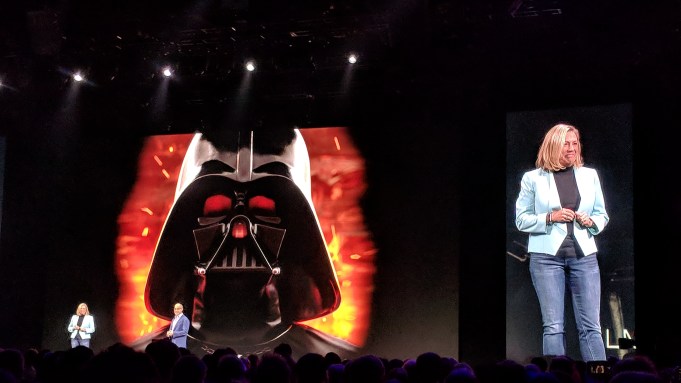 “Our mission at ILMxLAB is to have fans step inside our stories, and ‘Vader Immortal: A Star Wars VR Series’ represents a significant step forward in that ongoing quest,” said ILMxLab’s executive in charge Vicki Dobbs Beck. “Our friends at Oculus share ILMxLAB’s ambition to bring compelling immersive narratives to life and using Oculus’ hardware, we will invite fans to experience Darth Vader as never before.”

The two companies first started to collaborate on the series back in 2016, Oculus head of experiences Colum Slevin told Variety Wednesday. ILMxLab ultimately won over David S. Goyer as writer and executive producer for the show. Goyer had some previous video game production experience, but said that ILMxLab made the conscious decision not to go down the game route with “Vader Immortal.”

“It’s not a game, it’s a story with a beginning, a middle and an end,” he said, adding: “It has some elements of immersive theater. It’s sort of a hybrid.”

ILMxlab previously produced a VR experience dubbed “Star Wars: Trials on Tatooine,” as well as a location-based VR adventure dubbed “Star Wars: Secrets of the Empire,” that was also written and produced by Goyer. Throughout this work, the lab honed its VR skills, said Dobbs. “We’ve been really learning that pacing is very important,” she explained.

As a result, “Vader Immortal” won’t just be fast-paced action. “There is also periods of reflection. Also periods of beauty,” said Goyer.

The lab is now in the process of finalizing its release plans for the title. Dobbs said that the series will be a paid title, but added that there hasn’t been a decision on pricing yet.

ILMxLab debuted a teaser trailer for the episode at the show, and Goyer said that it would allow players to enter Darth Vader’s palace and take part in the action themselves.
Facebook officially announced Oculus Quest as a new standalone VR headset at Oculus Connect Wednesday. The $399 headset is scheduled to ship in early 2019, and consumers are supposed to have access to over 50 games and apps at launch.

Having a “Star Wars” title as part of that launch line-up is a big deal for Oculus, admitted Slevin. “People have been dreaming of being transported into that world since 1977,” he said.

Update: 3:45pm: This article has been updated throughout with additional details on the title as well as quotes from Dobbs, Slevin and Goyer.