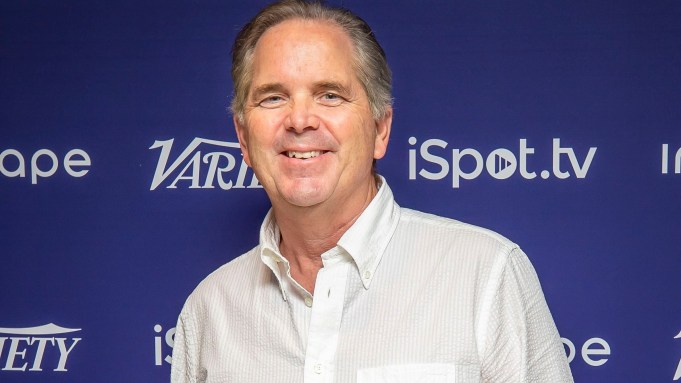 Disney and Comcast are battling to own big pieces of 21st Century Fox — including Fox’s 30% share in Hulu, which would potentially give the winning bidder majority control of the subscription-streaming service.

Randy Freer, a 20-year Fox veteran who was named Hulu’s CEO last fall, faces the task of building on the company’s momentum amid uncertainty about its long-term ownership structure, not to mention competing with megabucks-spending rival Netflix. Earlier this month, Hulu announced a major restructuring on his watch, which included the departure of chief content officer Joel Stillerman and top execs Tim Connolly and Ben Smith as well as the hiring of its first chief data officer, Jaya Kolhatkar.

Freer sat down with Variety last week at Cannes Lions advertising conference to talk about the reorg, what it means for the business, Hulu’s parent companies — and his hope that breakout original series “The Handmaid’s Tale” can keep going for 10 seasons. (Watch more interviews from this year’s Variety Cannes Lions Studio at this link.)

An edited transcript of the conversation:

Hulu recently underwent a pretty significant reorganization… What’s that going to do for Hulu?

I think where we’re really focused now is around our growth, and how we scale in this marketplace. I saw after six months coming in that we really needed to align our efforts, and we’re aligning around four basic areas: technology and products — previously they were separate organizations; subscriber journey… making sure we can engage and we can retain and we can delight our customers from the first time they touch us right on through their lifespan with us. The third part is content… the fourth area is around advertising revenue, and really flipping the model there — we believe that advertising, rather than being commercial interruption, can be a strategic advantage for us. We offer consumers choice. They can have ads or not have ads.

The majority of [Hulu’s] 20 million subscribers are on the advertising plan. What percentage roughly?

We haven’t really announced a percentage, but it’s well over 60%. I guess we just did announce a percentage.

What does the new structure mean for your original programming? Joel Stillerman has left after about a year. Why did he leave the company?

Well, again, I think it’s aligning around certain things that we need to be great at. I think Joel was terrific and brought a certain level of experience to that. His job was overseeing all of content, and what we’re doing is we’re separating the content into our acquired content, which is live and our on-demand acquisitions, and then originals. Craig Erwich and his group have always been focused on originals. This will allow them to continue to focus on that, hopefully make the decision process a little easier and allow for a few less layers in that conversation.

When we talk about content, we provide it in three ways. Obviously we acquire it through library content and license it; we acquire it live for our live service in the way of networks; and we make it. So I think what we’re doing is every day, we’ll evaluate what’s the best way to allocate our resources. It’s our largest investment by far in the business, and sometimes it’s going to make more sense to make originals, sometimes it’s going to make sense to acquire more library content, and sometimes it will make sense to add networks to our live product.

What are those decisions based on? Is it opportunity? Is it data showing viewing patterns and where you’re getting the most bang for the buck?

The simple answer is “all of the above.”… Originals for us is something that we have to get much more targeted around. We’re not going to make 800 shows. I mean, next year, we’ll probably make 20 or 25 shows. So we have to be very specific with what we want those shows to do, how we want to invest in them. Obviously we’re coming off the second season of “Handmaid’s Tale.” We’ll roll into “Castle Rock” July 25 which is [from] J.J. Abrams and Stephen King, which we think is gonna be awesome. We want to make sure that we have a combination of original content that’s gonna be impactful, that’s gonna be familiar to people, and hopefully is going to give them another reason to subscribe and be part of the relevant cultural conversation by being a Hulu subscriber.

Do you think Netflix is paying too much for content?

Look, I think Netflix looks at their economics and decides what they can pay or what they want to pay. Content is something like talent, right? You can’t overestimate the value of talent when it works… You’re never overpaying for those things that are a hit. We could sit here today and say, “‘Handmaid’s Tale’ was incredibly expensive,” but certainly worth it for our audiences and for our business. The challenge in content is not the successes. The challenge are the things that don’t become relevant in the cultural conversation.

“Handmaid’s Tale” has been renewed for season 3. Are we definitely going to see season 4 at this point? This is like your “Game of Thrones.”

Look, “Game of Thrones” is an awesome show as well. But look, “Handmaid’s Tale” has been an incredible experience for Hulu… I think the second season is even better than the first. It’s accessible, it’s big, it’s bold, and it still keeps that conversation going. They actually opened the writers’ room to the third season if you can believe it a couple weeks ago… The creative process will determine, is it a fourth season, is it five seasons? And I think that’s one of the benefits for creators in the streaming world — shows can take a natural progression, they can live for as long as they should live or they can end. I think it’s unfair sometimes in the characterization of broadcast television that we talk about a show’s been canceled after four years or seven years, whatever it is… Look, I hope, as success goes, there’s 10 seasons of “The Handmaid’s Tale.”

[Access to data is] one of the biggest differences for you, isn’t it, from where you were at Fox to coming to Hulu?

Oh, there are so many differences, across the board. But certainly, the access and the ability to have a direct consumer relationship and know what those consumers like and don’t like, and when they come in and leave your platform for a variety of reasons…. It’s still to me mind-boggling that an industry as large as television is wholly economically regulated by a third-party measurement service that does the best job they can but still has challenges.

AT&T now owns 10% of your company with the completion of the acquisition of Time Warner. The [30%] stake owned by Fox, we’re going to see that probably go to either Comcast or Disney. Do you have any opinions on what happens next to Hulu?

Wouldn’t it be easier if you were independent?

Look, I don’t know that it would be easier… I think all of our owners have been incredibly supportive over the years, particularly in the last seven or eight months. They’ve provided resources, they’ve reinvested, they’ve created access for their content…. The one thing that I continue to say seven months or so in is, I am more optimistic today than the day I started because there’s so much ahead of us and there’s so much opportunity to be right in the middle of where consumption is going.