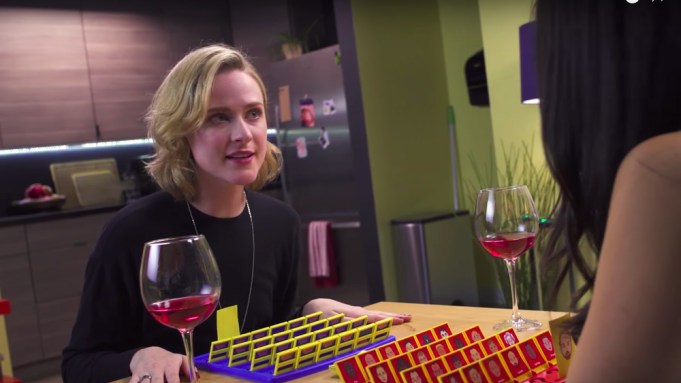 The #MeToo edition of the game finds the actresses trying to guess the Hollywood or media power player accused of sexual misconduct. Bill Cosby, Harvey Weinstein, Kevin Spacey, Matt Lauer, Louis C.K., Terry Richardson, and Mario Batali are a few of the familiar faces on the game board.

“Did your person prey on men?” Wood asks. “Not this time,” Tran responds. Wood then proceeds to rule out Spacey.

“There are so many cases of sexual harassment, that they update a new deck every 10 hours,” Randolph says, joining the game.

The video ends with a public service announcement encouraging support for Rise, a nonprofit organization that aims to defend the civil rights of sexual assault survivors. The PSA was released in tandem with a hearing held on Capitol Hill for the implementation of the Survivors’ Bill of Rights Act. Wood, Rise CEO and founder Amanda Nguyen, and Rise chief of staff Lauren Libby will attend the hearing to testify on behalf of sexual assault survivors nationwide.

“I wanted to participate in Rise’s PSA to help harness the power of the #MeToo movement into concrete action,” Wood said. “If you are fired up, angry, or feel helpless, join the Rise movement to help protect the rights of sexual assault survivors across the country.”

In 2016, Rise worked toward passing legislation that led to the creation of the Sexual Assault Survivors’ Bill of Rights.

“As the national conversation continues around the #MeToo movement, we want to give survivors and allies a way to take action to protect the rights of rape survivors everywhere, regardless of geography, race, or economics,” Nguyen said. “We are thankful for the support of Evan, Kelly, Da’Vine, Tatiana, and the Funny or Die team to build the Rise movement across the country with the goal of passing the Sexual Assault Survivors’ Bill of Rights in every state.”