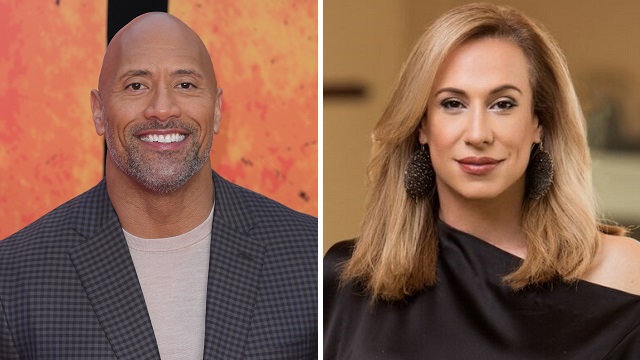 Atom Tickets is bringing more high-wattage Hollywood electricity on board: Dwayne Johnson and his business partner Dany Garcia have teamed with the online-ticketing startup as investors and advisers.

Johnson and Garcia, who were formerly married, are the co-founders of Seven Bucks Productions. Johnson, aka “The Rock,” is the former WWE star who’s a bankable box-office draw, have toplined recent major studio releases “Jumanji: Welcome to the Jungle” and “Rampage.”

In their advisory roles, Johnson and Garcia — along with other Seven Bucks execs — will provide guidance to the growing startup. They join filmmakers Steven Spielberg, J.J. Abrams, and Tyler Perry on Atom Tickets’ board of adivsers.

“My main objective is to deliver entertainment that the world can enjoy,” Johnson said in a statement. “Coming aboard with Atom Tickets creates an opportunity for us to add even greater value to the moviegoing event.” He added, “We are not only deepening the connection with our fans and their moviegoing experience, but also revolutionizing the business of ticket buying as a whole.”

The amount of Johnson and Garcia’s investment in Atom was not disclosed. Atom Tickets, founded in 2014, has raised more than $125 million from Lionsgate, Disney, 20th Century Fox Film, and Fidelity, including a $60 million funding round earlier this year.

If nothing else, having The Rock — one of the biggest movie stars in the biz — as a backer and promoter will help Atom Tickets boost awareness among theatergoers. The company competes with online-ticketing leader Fandango, which is owned by NBCUniversal.

Garcia, commenting on the Atom Tickets partnership, said Seven Bucks seeks partners “reimagining how the entertainment industry does business to most effectively delight, inspire and add value to the consumer experience.” She added, “By joining their advisory board, we’re excited to add our insight and storytelling skills to further harness their potential and transform how our global audience plans a night at the movies.”

Atom touts itself as a next-gen ticketing service — built from the ground up for social and mobile. Its app lets users invite friends to see a movie while letting everyone pay separately and uses digital QR codes instead of paper tickets or vouchers. The service is available on more than 20,000 screens across the U.S. and Canada.

Matthew Bakal, co-founder and executive chairman of Atom Tickets, said in announcing new partners, “Dwayne has a unique and impressive connection with movie fans around the world who love going to theaters to watch his silver-screen adventures. We’re honored to have the opportunity to tap into his passion for the motion-picture industry to ideate the possibilities.” Regarding Garcia, Bakal said, “Dany is a global business strategy and marketing force that has a proven record of success along with her talented team of brand and marketing executives.”

For what it’s worth, Atom Tickets’ three other advisers — Steven Spielberg, Tyler Perry and J.J. Abrams — offered shout-outs to Johnson and Garcia in statements provided by the startup: