Inside Disney’s StudioLab, Where the Company Tests and Previews Cutting-Edge Technology

Walk the halls of the Old Animation building on the Disney Studios lot in Burbank, Calif., and you’ll encounter constant reminders of the company’s history, with walls full of framed sketches of iconic Disney characters from decades past.

But turn a corner, and you might find yourself face to face with the company’s future: An illuminated glass door displaying a glowing, animated Mickey silhouette, with the iconic mouse head morphing into play buttons, cogwheels, and networked nodes.

Behind that mysterious door is the Walt Disney Studios’ StudioLab, a facility the company opened earlier this summer to explore and showcase cutting-edge technologies. Typically, the lab is only open to studio creatives and executives. But earlier this month, the company closed it down for the day to keep any still-unannounced projects safe from prying eyes, and invited Variety for a tour. 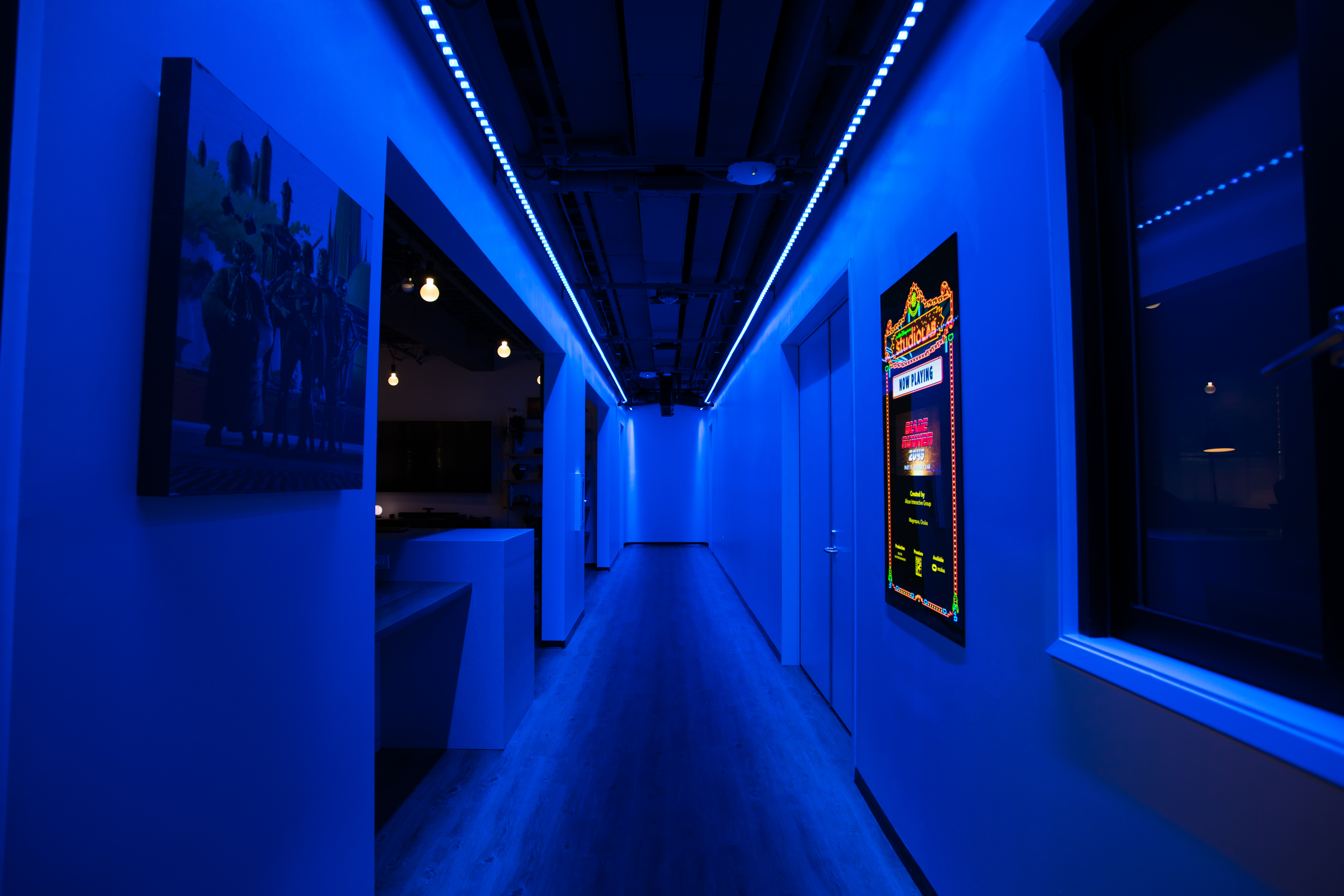 The hallway of Disney’s StudioLab, complete with a prototype for a next-generation movie poster on the right.

“In many ways, the lab is a roadmap,” said Walt Disney Studios VP Benjamin Havey, whose Technology Innovation Group has been spearheading the development and launch of the facility. Disney Research has been toying with far-out tech for a long time. The StudioLab is committed to innovations that are being a bit closer to product stage, explained Havey.

One example for this is Disney’s attempts to reinvent the good old movie poster, which has been hanging in theater foyers for decades. The StudioLab version is based on a pencil-thin LCD display that’s mounted flush to the lab’s wall and that can be controlled from an iPad to load new content. In the future, the poster could dynamically display movie recommendations based on who is looking at it, or invite consumers to interact with it, Havey said.

StudioLab uses a combination of three projectors and internet-connected light bulbs to turn its hallway into a 3D projection space.

The lab is also using its hallway to prototype another cutting-edge technology: A combination of projectors and internet-connected light bulbs makes it possible to project 3D scenes on three walls for a kind of glasses-free virtual reality experience. The idea behind that project is to explore ways to use 3D and VR assets in the company’s theme parks, explained Havey.

The lab has been founded with the goal of letting creatives from all of the company’s film studios, including Disney Live Action, Walt Disney Animation Studios, Pixar Animation Studios, Marvel Studios, and Lucasfilm, benefit from emerging technologies. At the same time, it’s meant as a space for executives from across the company to learn about and test out new tech. “We want it to be half the time a lab, and half the time a showcase,” said Havey.

Half lab, half showcase: Disney creatives and executives often use StudioLab for retreats and to familiarize themselves with new technology.

Even though the facility just opened its doors, it has already hosted over 1000 creatives and executives, he said. In fact, just before Variety was allowed in, a group including “Tron” producer Justin Springer was ushered out of the facility. Creatives and executives sometimes use the space for retreats, or pop in to watch one of the latest VR films, which can be experienced complete with motion chairs.

While some of the technology shown at StudioLab may eventually find its way to theaters, VR arcades or theme parks, other prototypes are being built and tested with creatives in mind. One of the rooms houses a collection of consumer-grade drones and equipment that can be used to shoot high-quality footage with something as simple as a smartphone. Disney hasn’t used any phones to capture feature film footage yet, but is already relying on drones to scout locations, Havey explained.

Some of the consumer capture technology tested by StudioLab.

Other production tools currently being demoed in the lab include controllers for virtual cameras. Disney has already been toying with the idea of letting producers use VR headsets to frame shots, but members of the StudioLab team quickly realized that not everyone was comfortable with the technology. That’s why it has been using the tools of the trade, including an actual camera dolly, to control virtual cameras in rendered environments.

StudioLab is exploring ways to use traditional equipment to control virtual cameras.

Disney built the StudioLab in cooperation with Cisco, Accenture and Hewlett Packard Enterprise. These partners help with finance and staffing, but also each bring their own expertise to the table, and help the studio develop new solutions for filmmakers.

One example: Cisco and the StudioLab team are working on a new Hollywood-tailored teleconferencing solution that combines your regular video call with a high-resolution stream from a studio to preview costumes, sets, and other key aspects of a movie from across the country.

Ultimately, the StudioLab wants to see some of these technologies graduate and find usage across the company, or even reach consumers’ homes. And Havey’s team of 20 isn’t running out of new ideas anytime soon: The StudioLab leadership already has 78 new project proposals lined up for review for next year, and is currently in the process of going through them to find the most promising candidates. Said Havey: “It’s a pretty exciting time for us.”